‘I thought my wife would be better off without me’ 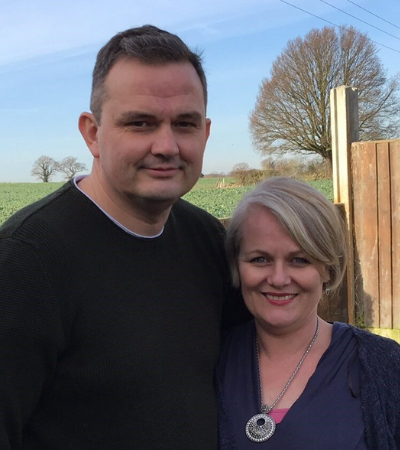 Diane, when Patrick was really struggling with his mental health, how was that for you?

It was a very lonely time, and a real learning experience. We would go to church and try and get some prayer, but we didn’t even know what to ask for or how we needed help. I was quite independent in those days – I’ve learned more to depend on people now – but, back then, I viewed asking for help as a sign of weakness. So I tried to be the strong one.

When Patrick had to go for major surgery I tried to prepare myself, because I knew I was going to have to change from being a spouse to a carer. So I went online to try and find information. There were depressing forums of people really struggling with looking after and caring for people, particularly those with mental health issues, and everything I feared was there in front of me: people getting resentful. They were themselves coming down with mental health issues, they were very lonely, they couldn’t go out and they would feel guilty all the time.

I thought: there’s got to be a way through this. I ended up going to the doctor myself because it’s impossible to watch someone you love go through a really difficult time without it impacting you. I was getting really stressed even before it all started – I was having panic attacks and recognised I was struggling with anxiety. Once I put a name to it and went to the doctors I was put on medication. I agreed to that because I knew I needed to keep strong; I could see Patrick was just spiralling downwards even more than me. In many ways, he had been struggling with mental health for years, but we simply hadn’t realised it. But when he had to stop to have the surgery it was like everything else caught up with him. He had nowhere to hide, no distractions and nothing else to look at. So for quite a long time, I was having to be the one picking him up off the floor, loving him and trying in some way to be there for him.

Patrick, do you find it hard listening to Diane share about what it was like for her?

Yeah, obviously. We have talked a lot about it and continue to share our story because we feel it’s an important story to tell. Whenever Diane shares, particularly when we’re doing it in person, there are queues of people waiting to talk to her afterwards because her experience resonates with their own.

I’ve been reflecting on the Good Samaritan recently and Samuel Wells has fascinating insights. He says that so often in the West, we see ourselves as Good Samaritans, the ones who swoop in and rescues. But actually maybe we’re the blind beggar on the road; maybe we’re the guy who’s bruised and needs to receive help. Sometimes receiving help is hard, because our pride gets in the way. Maybe only Jesus is the Good Samaritan and he’s the rescuer. Recognising our Western mindset does teach us humility, and hopefully a bit more grace for each other as well.

When you had an operation everything all kind of came crumbling down with your mental health too. What were the lowest moments like for you, Patrick?

The operation was just one of many challenging things we were experiencing at the time. It was like a perfect storm of things going on. My dad had cancer very seriously so was in hospital for nine weeks and in the end lost three stone in weight. We had kids with serious health issues as well. It felt like the game Tetris: everything caved at once.

When you struggle with your mental health, you start asking: “Why me?” and “What have I done wrong?”. In some quarters of the Church, they’ll say it’s because you have sin in your life, so then you start reviewing all the sins that you’ve done. This results in your self-esteem taking an absolute hammering. There were times where I thought it would be better, and Diane would be happier in the long run, if I wasn’t around. I think that was the lowest I got. I just saw myself as such a burden and a drain. It was hard to see any way through those days really. It was a particularly lonely time as well, because the people I had mentioned it to in Church gave us some really unhelpful advice. It was certainly a tough time.

Patrick and Diane Regan have set up mental health awareness charity Kintsugi Hope to support others in the way they needed in their tough season. To listen to the full interview, click here.