Life after a Christian divorce 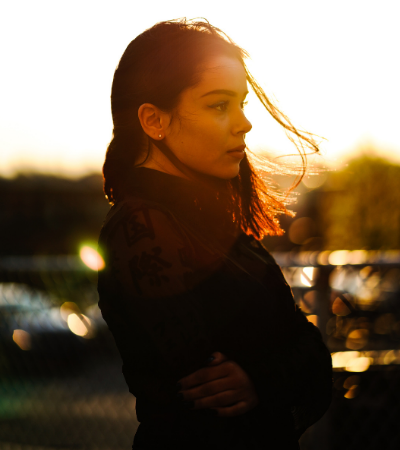 You went through a very difficult time when your marriage ended. How did that impact you?

It really had a detrimental impact, even before the marriage ended. I'm a Christian and I believe in marriage, but realised I was in an unsafe situation and that it really wasn't God's best for me. So I struggled a lot with that concept of being a Christian, being a woman and knowing that I was not safe. I remember speaking to some church people, even the church leader, and they were like: "Oh, you've not got enough faith, you need to pray harder." It was putting everything on me when it was actually this guy who was a wolf in sheep's clothing, and there's not much you can do about that kind of person. It is only God that can change their heart.

My identity really changed and I think it hit me when I went back to London - because I moved away by that point. I was sitting with one of my friends I used to work with, and she was like: "Steph, you've changed, you're not the same person you were, you've become less than who you were." That's when you know that your identity has completely transformed and you're not who you were before the marriage. I had ended up walking on eggshells and become a lot more conscious, a lot more aware, a lot more trying to avoid situations avoid conflicts - just more anxious, really.

So rather than you being a different person in marriage because you had flourished, you'd actually almost kind of gone in on yourself because you're living in such a fearful situation?

Yeah, and that challenges your relationship with God, because obviously I've got a lot of faith in the fact that God orders my steps, so trusted him to bring a marriage partner. I submitted to and asked him to direct my steps. It really did challenge who I was as a Christian woman and it challenged me in terms of seeing myself as a child of God, because I thought if I do end up going through a divorce then God can never use me and I'm going to be a complete waste because I've got no purpose anymore. Obviously, the enemy gets in and plays on your mind and on insecurities and these fears to keep you in that negative situation; he doesn't want us to flourish, to find our purpose in the kingdom and he definitely doesn't want us stepping out for God.

Did you feel pressured to stay in the situation then, even though you say you felt unsafe?

Yeah, I stayed in there a lot longer than I should have done. I met one of my best friends for coffee, and she's definitely got the gift of discernment. She was saying, "I don't know what's going on, because you're not telling me anything, but I can see and God is saying: 'This is not what I have for you'..." And she just kind of left it and that obviously went round my head. The next time we met up, I spoke to her and shared a little bit of what I was going through. She said: "Steph, this is not a safe situation. This is not. Do you really believe that God who loves you, the God who created you, would want you to be in this unsafe situation, where your life at times has been threatened?" There were so many times when I was at my most vulnerable, when this man who's supposed to love me would just become intimidating and tower over me and use words and his body language to intimidate me to hurt me. And she was like: "This is not from God.”

It took a long time for me to deal with that. I had to pray through it, and it was still another couple of years before I believed that I could make that move. In that time a friend bought me like a necklace, which I'm wearing, and it's got a mustard seed inside it. My faith was that small and probably smaller. I thought: "I don't know if God can use me."  I went to an event, and someone who doesn't know my situation prayed and said: "OK, I don't know if this is going to mean anything, but God says that you are on a path, you're in a grey area, you need to make a move, and God says whichever direction you are going to go in, I am with you, but you have to make a move. You can't stay where you are." That gave me the sense of knowing that God has got my best. Even through divorce he was with me and he guided my steps. I am someone that occasionally gets dreams and visions, and he showed me when I started to make the move that this was going to be a dark period, but he was going to be with me and he was going to support me and carry me through.

If you have been affected by the issues in this article, and would like to speak to someone, Premier Lifeline is a confidential telephone helpline offering a listening ear, emotional and spiritual support from a Christian perspective, prayer and signposting. Premier Lifeline is open 9am to midnight every day of the year: 0300 111 0101.