‘Angels appear to me’ 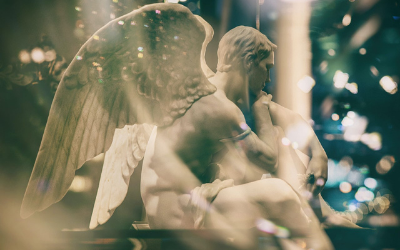 A lot of people say to me: “Char, I don’t really think about angels.” But Luke 2:9 says they’re radiant and I’ve seen them – they do wear bright white clothing when they show up. I’ve seen them, in human form, but still with something that is not of this earth.

When they appear in scripture, angels are sent by God to minister to and for us; they are on a mission. I love how Gabriel responded to Zechariah, John the Baptist’s father, by basically saying: how dare you question me and what I’ve just said to you. He said: “I am Gabriel. I stand in the presence of God” [John 1:19]. Angels are in the presence of God.

In Revelation we are told that angels are often likened to stars [Revelation 1:20]. They carry God’s commands to godly people. They are also joyful: even when one sinner repents (Luke 15:10), the angels rejoice! Can you imagine that beautiful image? They rejoice over every single one of us. It’s amazing!

Angels may be strangers that you’ve entertained without knowing it. In scripture it says that we should entertain strangers. Why? Because you may be entertaining angels unaware [Hebrews 13:2]. I love the music group Newsboys; they have a song called ‘Entertaining angels’ that I love because I’ve been there, done that.

Angels are in my house all the time. Young people that I coach come here [to the home] and they stand in the doorway in shock and awe. They’re like: “Oh, my gosh.” They’re flipping out because they can see what’s in this house. And I’m like: “Yeah, I’m used to it.” But I don’t ever take it for granted, because they don’t always show themselves to me.

When I’m preaching in different churches many pastors come up to me and ask: “Do you know your angels well?” I say: “I know they’re there, pastor.” Sometimes an angel is standing right next to me and they ask: “Why is he at my church? What’s going to happen?” I respond simply by saying: “Well, we’re talking about the Lord, and whenever we praise the Lord, his presence comes, that Shekinah glory (in Hebrew), the glory of God.” Where there’s praise of the Lord, you can expect angels might show themselves too.

Why have so few had an angelic encounter?

I think it depends on the call on your life. But not always. I used to hear these stories about angels as a child. I would recommend an [old] book that’s been republished: Visions Beyond the Veil. It so affected me as a child – and is as life-changing today. It describes how children in an Asian orphanage were being visited by angelic forces and having visions with the Lord. When I was a little girl, my school principal in America used to read that book to my class every Friday. And I said: “Daddy, God, I want that too.” I was ten or eleven years old. Be careful what you ask for! So, I really believe it’s about your personal walk with God. What are you asking for? I want to make this really clear though: we never, never, never worship angels. Never! It says that in Revelation and elsewhere [Revelation 22:8-9]. We are never to worship them. We’re to receive them as messengers of the Lord God but we worship God alone, never the angels – even though they’re probably going to speak into your destiny.

Charlynne has written about some of her angelic encounters in her book No Appointments Necessary, which you can get at charlynne.com

Photo by Julia Kadel on Unsplash