Many of us allow ourselves a sneaky snooze in the mornings but the pros insist it’s bad for your routine. Here Lauren Windle explains why getting straight up was not only great for her sleep but for her relationship with God. 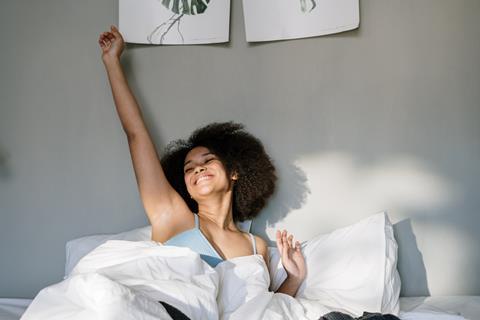 Years ago, a friend of mine told me that her new year’s resolution was to stop hitting the snooze button. She would be waking up with her alarm and practicing the discipline of actually getting out of bed at that time. She argued that, as she would always factor in a snooze or two when she set her alarm, she was just disturbing the last 20 minutes of her sleep. Instead she decided to commit to getting up when the dreaded music sounded and allowing her to have an undisturbed slumber right up until that point.

The more I thought about it, the more sense it made, so I started trying to do the same. Previously, I would often cut into my morning Bible and quiet time by relentlessly hitting snooze, leaving me less time with God, so I decided it was time to make a change. These days when my alarm goes off, it’s not a toe-curling 90s ring tone the welcomes me into a new day, it’s Premier Praise on my radio. I know, I know it sounds like I’m lying because I’m writing this for Premier’s Woman Alive. But that’s legit. I initially wanted Premier Gospel but at times it was a bit too joyful for me pre-coffee.

Previously, I would often cut into my morning Bible and quiet time by relentlessly hitting snooze, leaving me less time with God.

You can imagine my smugness when I got an email from the experts at Online-Bedrooms.co.uk telling me that what my friend and I believed was right. The professionals insisted that the biggest thing to avoid was pressing the snooze button as it could confuse your body, making it harder to wake up later.

Nic Shacklock at Online-Bedrooms.co.uk.co.uk said: “What happens is our bodies think we’re going back into a sleep cycle, we then disrupt this when we do eventually wake up which makes us feel more tired.” So, what can you do to maximise your chances of getting up when you wanted to and not eating in to your morning routine with an addition seven minutes of slumber? Well, the experts had an answer to that as well;

It can be tempting to hit snooze and get an extra ten minutes in bed but according to experts this will only make you more tired when you come to waking up. The reasoning behind this is that your body thinks it’s going back into another sleeping cycle and prepares for another eight hours sleep. You disrupt this second sleeping cycle when you wake up after hitting snooze, making yourself feel more tired.

Let some light in

During the working week why not leave your blinds and curtains unopened a bit. This way the natural morning light will wake you up, making it harder to nod back off.

Put your alarm further away

Whatever you use as your alarm, whether that’s your phone or an actual alarm clock, try putting it further away. This way, when it goes off in the mornings, you’ll have to physically get out of bed to turn it off.

It can be tempting to lay in bed for a bit on your phone scrolling through social media or even to roll over and grab your Bible to do your quiet time but this makes it much more tempting to stay in bed. Getting up as soon as your alarm goes off eliminates the temptation to stay in bed.

Get into a sleep schedule

The best way to wake up in the mornings is by getting yourself into a routine to get a decent amount of sleep so you feel refreshed in the mornings. Do this by unwinding in the evenings and staying off of any electronics which can keep your brain active and awake.

Keep your wake up time consistent

Another way to make waking up in the mornings easier is to keep your wake up time consistent. Waking up at 6am one day and 8am the next confuses your body. Sticking to one time will allow your body to get into a bit of a rhythm, making it easier to wake up.

Don’t sleep too much

Getting an early night is great, but too much sleep has the opposite effect. Seven to eight hours is the recommended amount of sleep and too much can make you feel tired as well as give you headaches and back pain.

So there you have it, sweet dreams and sweet morning routines to you all!