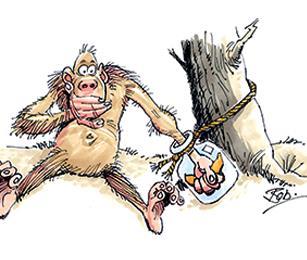 Are you holding onto something that you really should let go? Susan Williams considers the challenge of change

Val’s friends were becoming anxious about her. She seemed increasingly overworked and overtired. Val owned and ran a small handicraft shop, and although it wasn’t making a fortune, it brought in enough and to spare. She was good at what she did, loved being her own boss and had great job satisfaction … at first. The recession had brought its commercial challenges, but Val was weathering those. The problem was the hours she had to put in.

When she’d started trading in the late ‘90s, there hadn’t been anywhere near as much paperwork to deal with. But over the years, the constant introduction of new standards, regulatory changes and compliance issues had demanded more and more of Val’s time, until she felt she was drowning in admin.

“The business was running me – not the other way around,” Val explains. “It felt like spinning plates in a circus, and I couldn’t see an end to it.”

Her friends watched uneasily as she grew more stressed and careworn. Her weekends were devoted to battling bookwork and deadlines, and she hardly ever accepted invitations. Their concerned enquiries were met with firm rebuffs. “It’s just until I get over this hump ...” she’d say. But the humps kept coming. Her friends shook their heads sadly. Something was going to give.

Looking back at that time now, Val cringes. “I didn’t realise it, but I was like the proverbial monkey with its hand trapped in a jar because it won’t release the banana inside. I was refusing to let go of my business – even though by then it felt like an overwhelming burden.

“I believed that as a good steward I had to make it work. I wasn’t prepared to consider that God might have given it to me for a season and was now calling me to something else.”

It’s often hard to recognise when something has run its course and it’s time to let go – which is perhaps surprising when you consider that God designed the living process as a constant flow of passing phases. Moving on, achieving closure, rites of passage, drawing a line under something – these concepts have resonance in our culture as we attempt to process and manage change in our lives.

Parenthood is the perfect example of how life develops in a series of interlocking stages. Childbirth is preceded by a nine-month preparatory period, pregnancy. And when baby arrives, each step in its progress – teething, toddlerhood, toilet-training and so on – is eagerly awaited and celebrated by its proud parents. Phase follows phase as a lifetime moves through its seasons, transforming a child into a teenager, an adult and eventually a pensioner.

And it happens so fast. Old hands caution L-plate parents to treasure every moment with their newborn, since they grow up before you know it. You listen dutifully, and you understand it all in theory. But when it’s suddenly your turn and you find yourself waving off your youngest as he leaves home, the anguish of that abrupt transition is so fresh and raw and deep that you might as well be the first person in the universe it’s ever happened to.

Growth and development – in other words, change – is embedded at the heart of what it means to be alive. But in the midst of it all we seem compelled to try and keep things the same. It’s cosy. It’s manageable. It’s controllable. An attempt, maybe, to anchor ourselves comfortingly to something stable in a fast-paced world where nothing stays still for a second. Then again, maybe it reflects man’s inbuilt yearning for heaven, that state of unchanging perfection.

Whatever the reason, we can be highly resistant to change of all types in our lives. Whether it’s the proposal for a new by-pass worryingly near your home, that unwelcome job restructure or a devastating medical diagnosis that will mean radical alterations to your lifestyle, change is often presented negatively, making it painful and difficult to handle.

“When I was training, my tutor’s favourite saying was ‘constant change is here to stay,’” laughs June, a retired missionary. “It was certainly true for me!” June’s ministry overseas developed in directions she’d never envisaged, constantly pushing her outside her comfort zone.

On occasion she even found herself serving in a location that became politically unstable and dangerous. “Once, we had to flee for our lives in the night leaving all our possessions behind,” she recalls. “Living by faith certainly had its challenges, but it taught me something priceless – to hold everything lightly, as if on an open hand. I try to appreciate and value the things God gives me now, as they may not last. But they’re precious while they do. I still don’t necessarily like change, but hope I have an openness to it these days that I certainly didn’t as a younger woman.”

And what about Val? “Hindsight,” she admits, “is a wonderful thing! Looking back, I can see God was calling me to switch career, but I thought I knew best and simply wouldn’t listen. I grew very resentful because he wasn’t answering my prayers to rescue the shop, and it wasn’t until I went down with a stress-related illness that I actually stopped to seek his will.

“That’s when I realised I was behaving like a trapped monkey. The business was my banana. God asked me quite clearly whether I was prepared to let it go.” Val is now office manager for a charity, a job she loves. “And the best thing is, it’s 9 to 5, so I shut the door on it at the end of the day! Bliss!” she says. “I have my life back. I’m so grateful to God for turning things around – despite my refusal to co-operate!”

Contrast June’s open palm with Val’s closed fist. How’s yours? Change, whether expected or unbidden, may never be something we’d actively choose, but nevertheless we should check our souls regularly for vested interests or hardened attitudes that could make us inflexible to the breathings of God’s Spirit.

The young Samuel provides a beautiful example of trusting openheartedness when he responds “… speak, Lord, for your servant is listening” (1 Samuel 3:10). Ask yourself whether you’re receptive to God’s promptings – or are you so busy you mightn’t even notice him speaking to you?

The Christian journey is a partnership with God. He wants to talk with us and walk forward with us, hand in hand, into new areas of personal growth and spiritual maturity, to unlock the potential he’s placed within us. Which will at times involve change.

If this sounds a little daunting, Philippians 2:13 assures us that God “works in you to will and to act in order to fulfil his good purpose”. He’s already prepared the path he’s purposed for you, and will be with you every step of the way as you move along it.

But more importantly, these verses promise he’s provided everything you need to successfully navigate transitions in your life, enabling you to “will and to act” – to want to as well as to actually do so. In other words, he’ll tenderly help you to align your will with his, to release your fears and to embrace the change, strengthening you through it all the while.

It all boils down to trust and surrender. God is totally dependable; beneath us, always, are his everlasting arms. So bin that banana. Let go, and let God …

+ Are you conscious of feeling stuck in some area of your life? If so, it’s not enough to simply ask God to resolve the situation. Don’t forget to ask yourself:

• Am I prepared to listen to God?
• Am I open to whatever he might say?
• Am I willing to act on it, even if it involves change or something I don’t want to hear?

+ Identify your bananas. Are there aspects of your life you feel you can’t – or won’t release? Pray about them, preferably with a trusted prayer partner

+ A past-its-sell-by-date banana is not a pretty sight. Do you really want to clutch it so tightly?

+ There are things we do need to hold onto. If you’re not sure, talk it over with a good friend – other people often pick up on things we’re too close to see

+ Remember all things come from God. So that banana you’re clinging onto isn’t even yours anyway!