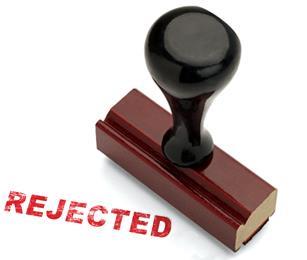 As she went out the door on yet another job hunt, my daughter said, “I have to psych myself up for this: rejection is horrible.”
“Yes, it is,” I agreed. “But you have to learn to deal with it.”

When I was my daughter’s age, I was already well acquainted with rejection. My father had walked out on his marriage, rejecting my mother for another woman. Of course, my four siblings and I were also rejected and abandoned – we never saw or heard from him again.

But for my mom this was history repeating itself. When she was an adolescent, her dad had an affair, and grandma divorced him. Having been cast aside by her husband, grandma went on to suffer further rejection from her community. In that small town in 1940s America, divorced women were shunned. In fact, sometimes people who were walking along and saw grandma coming would move to the other side of the street.

My mother suffered multiple rejections. She had one sister, who had been adopted. And because grandma was concerned that this child might feel less special than her biological daughter, she spoiled her. The effect was to make my mother feel that she was loved less. Then, when my grandparents separated, mom’s father would often come to take his adopted daughter away for the weekend. But he never took my mother, believing that ignoring the production of their union would be a good way to hurt grandma.

Thankfully, God has graciously healed a lot of my own emotional wounds from the past. And he has given me a husband who is faithful to me and committed to following Jesus. Yet there was a time, when I was a teenager, that I was determined to remain single. I didn’t want to go through what my mom and grandma had experienced. It seemed safer not to marry.
But as a young adult I did open my heart. And I was dumped by my first love … twice. Since that time I have often reflected on the impact rejection can have on people, even on Christians and especially on women.

Rejection is not always about love. In school we have to learn to cope with not being chosen when sports teams are picking sides, or being excluded from a friendship group because we are not popular. As we get older and start applying for jobs, we discover that we won’t survive unless we can learn to let the word “no” bounce off us. Trained as a writer, I received plenty of coaching about how many rejection letters to expect (ie you could wallpaper your house with them!).

All of us need to feel special, loved and needed, but we learn to carry on when we are not chosen. Not picked for the team you want to be on? The other team needs you more. Rejected because you’re not popular? It’s good you found out now – look for others who are more worthy of your friendship. Didn’t get the job? The hours were not what you wanted anyway. Something better will come along. Boyfriend broke up with you? There are plenty of fish in the sea. God has someone better for you.

Our parents do their best to teach us how to deal with being rejected. Good parents encourage us and help us to be confident in our strengths and abilities. So it’s easier to wait for a true friendship, a spouse, a job. But if they’ve been wounded by rejection, their ability to help us may be limited.

Sadly, my mother’s talents were overshadowed by rejection; her natural optimism and zest for life were curtailed by it. Feeling overlooked by both of her parents had left her with deep wounds. If she had received healing for these, she would have been better able to prepare her children for whatever rejections they would face.

There are plenty of quotes out there about why rejection is not that bad really. For example:

• When one door closes, another one opens.

• A clear rejection is always better than a fake promise.

• Rejection doesn’t mean you’re not good enough. It just means the other person doesn’t realise what you have to offer.

I don’t know how you view these statements, but to be honest they don’t always help me. Even if there is truth in them, even if they are logical, even if I can agree with what they are trying to communicate. Because they don’t cancel out the fact that being rejected hurts. Sometimes it’s just a momentary affliction, soon forgotten. But other times it hurts and hurts and keeps on hurting.

For weeks after my first love ended our relationship, I woke up every morning with a pain in my stomach. I would then say his name out loud and remind myself that this was reality now, and I would never be the same again.

Where does my help come from?

During this period a retired missionary visited our church and spoke to our young adults’ group. Her topic was disappointment. I went along to hear her, but doubted she could help me. Before the talk I told her that I’d had a very big disappointment and didn’t really think any words could help. “Oh,” she said, “was it disappointment in a relationship?” I nodded and then she started to share with us. It was a good talk, but what stood out was an illustration about the Christian artist and writer Joni Eareckson Tada.

A quadriplegic, Joni paints by holding a paintbrush with her teeth. Once, when she was addressing a women’s group, she painted a beautiful scene featuring a Swiss chalet. Everyone thought the finished product was beautiful and praised her work. But, in the next instant, she took her paintbrush up again and the women watched as she deposited a slash of paint across the picture, ruining the beautiful scene. The onlookers were distressed. Why had Joni rejected her work of art?

Then Joni took up her brush again and worked quickly to create a new painting from the one that was ruined. When she had finished, a magnificent tree adorned the canvas. And it was far more beautiful than the original painting had been. Joni said, “When you put something that is broken or ruined back into the hands of its Creator, he can make something far more beautiful out of it.”

God used this little story to help me get up again. The rejection still hurt, and would for some time to come, but I now saw that I had to take the pain that I felt every morning and give it to God, and ask him to heal me and make something beautiful of the life that I thought was ruined forever. And that is what I did.

Rejection hurts, and it always will. But we have a wonderful God who knows all about that pain: “He was despised and rejected by mankind, a man of suffering and familiar with pain. Like one from whom people hide their faces he was despised, and we held him in low esteem” (Isaiah 53:3, NIV).

Don’t let rejection keep you from becoming the person God made you to be! Remember that often not being chosen is not personal – ie there were too many applicants and not all could be hired. When the rejection cuts deeper, and your heart is in the balance, give your ‘ruined painting’ back to its Creator. He can make your life a masterpiece.

+ Suzanne Green is a freelance writer based in Edinburgh