Joining together to stop leprosy 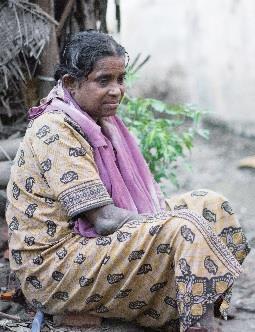 For many people living in Britain, leprosy is an ancient disease that belongs to biblical times, a condition that’s long been consigned to history. However, for people in many parts of the world, leprosy is very real. The condition continues to devastate lives, causing permanent disability and terrible discrimination amongst the most vulnerable and poorest in societies.

Affecting people across the world

Leprosy is an infectious bacterial disease that ravages the body through damaging the nerves and the skin. As well as developing the most appalling ulcers and muscle weakness, you lose the ability to feel pain and therefore detect danger: as a result people sustain all kinds of serious injuries.

Furthermore, the infectious nature of the condition has led, and often still leads, to people being ostracised – turned out and cut off from their own families and communities.

One person is diagnosed with leprosy around the world every two minutes. According to figures released by the World Health Organisation, more than 200,000 people globally were diagnosed with the condition in 2018; 16,000 of them were children.

I have worked for The Leprosy Mission Scotland for 21 years and the experience of seeing a teenage girl arrive at a hospital in Nepal to find out her condition was too advanced for treatment will always stay with me. I could not understand why a child should suffer like this in the 21st Century.

During my time with the charity I have been greatly encouraged by the reductions in the prevalence of leprosy around the world. This means that it is no longer considered a serious public health problem in many places. The downside of this is that there is less of a focus on this horrific disease even though it is completely curable. It’s easily treated with antibiotics and, if detected and treated early, disability and amputation can be prevented.

The Leprosy Mission Scotland, established in 1874, is dedicated to transforming lives and ending leprosy. We are part of an international group of 31 member countries, a Global Fellowship, all working towards the same end. In Scotland, our emphasis is on fundraising and generating resources that will be used in our partner countries in Asia and Africa to spot, treat and stop leprosy.

We recently launched a new campaign asking people to join the fight against leprosy. One of our volunteers, Dr Linda de Caestecker, is the director of public health for Greater Glasgow and Clyde. We asked her to write a report highlighting the issue and action that needs to be taken.

Linda walked into our offices as a medical student nearly 40 years ago and ended up going to a leprosy hospital for her summer elective. Interestingly, it was her time working with leprosy patients in South India that led to her pursuing a career in public health.

In her report on the disease, Linda sounds an alarm: “there are opportunities to achieve a leprosy-free world but only if we continue to devote resources and attention to the management and prevention of this disease…We are urging people to see it as a human rights issue. If urgent action is not taken now, past achievements in leprosy control could be reversed”.

This warning should concern all of us: people are suffering and we can and must do something about it. Together we can finish what Jesus started. Jesus had a special concern for people affected by leprosy and he healed many. We will make leprosy a thing of the past.

When Nagammal was just 20 years old the first signs of leprosy started to appear, as pale patches of skin on her face. By the time she was diagnosed with leprosy her hands and feet had already started to become deformed. She used to cook for her elderly mother but couldn’t feel the heat of the pot handles, the utensils or the oil that splashed Burns became ulcers, ulcers became infected and the deformities got worse. Nagammal had completed the drug treatment for leprosy, but not in time to prevent permanent nerve damage and all the problems that follow. She was never shown how to protect her hands and feet or how to manage her ulcers and so the damage just got worse. Her husband had married her in her early 20s, even though she already had leprosy. He stood by her as the deformities got worse. He was her rock when their baby son died and he became her carer as she became unable to walk, to cook, to wash herself or to feed herself. In the end the strain was too much and, under pressure from the whole extended family, her husband left. Nagammal was heartbroken: “It’s an unbearable pain I have been experiencing emotionally these past few years. We married out of love against our culture and religion, yet he still left me. But I don’t blame him.

Her family saw her as nothing but a burden and she ended up living alone, abandoned, in a goat shed. As she crawled around, living on the meagre amount they gave her, she got ulcers on her knees and elbows, which also became infected by her surroundings. This is where staff from The Leprosy Mission in India found her and took her to one of the organisation’s hospitals. Today, Nagammal’s leprosy has been cured and her life transformed. Reconstructive surgery on her forearm has given her the ability to hold a spoon and cook independently. She has received a wheelchair so she can move around. This independence has brought her increased dignity...no more crawling on the ground. Custom, made-to measure footwear will protect her feet from injuries and infections. Nagammal has newfound confidence and tackles life head on.

To find out more about The Leprosy Mission Scotland please visit leprosymission.scot

If you wish to support the work of The Leprosy Mission Scotland you can donate online: leprosymission.scot/donate or by calling 01786 449226.