Jesus was my lifeline 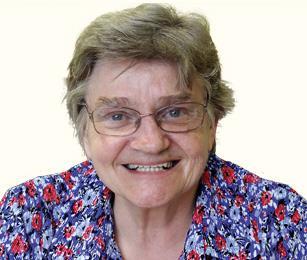 Jesus was my lifeline

Joyce Passmore lost a whole chunk of her life when she was put into a psychiatric hospital and left there for 15 years. She tells her story to Sharon Barnard.

Listening to this gentle, quietly spoken woman recounting the dreadful experiences that ‘deleted’ her childhood and damaged much of her adult life, seems to make her nightmare story all the more harrowing.

Joyce describes, without any trace of bitterness, being abandoned as a teenager in a psychiatric hospital where she had no place to be in the first place, receiving repeated barbaric therapies and unnecessary medication that wreaked havoc in her mind and body, and how she nearly died twice – once through near strangulation by a fellow patient. That she eventually came out 15 years later, battered but not defeated, is due to her steely determination and her complete trust in the knowledge that Jesus would never let her go.

“I always had a child-like faith,” explains Joyce. “I believed in the Lord Jesus and that stayed with me. Verses I’d heard and read in Sunday school would come back to me and they were a lifeline. ‘I will never leave you or forsake you’ [Hebrews 13:5] became very precious to me. I just believed in those words and held on to them. I knew Jesus was with me.”

Her treatment by the psychiatric system seems hard to fathom in these enlightened times, but in 1957 Joyce’s GP had recommended to her parents that she went in to ‘hospital’ for three weeks so they could sort out her medication for severe epilepsy. The seizures started when Joyce was 13 years old. Joyce was in agreement until she realised with horror that she was being sent to Tone Vale Mental Hospital near Taunton, previously known as an asylum.

Many other children with medical conditions who were admitted to Tone Vale never fully recovered or came out, says Joyce. Some were disabled or had learning difficulties and had no reason to be in a psychiatric hospital. All were heavily tranquillised to keep them under control. “That hospital cancelled out the promise of so many lives,” she writes in her autobiography The Light in My Mind. “Anyone who seemed different or who did not fit into what society classed as ‘normal’ was shut away.”

No one came for her. No one would listen to her constant requests to leave. She says, “It began to dawn on me in the midst of the havoc in my life, that God was the only one who would listen to me.”

At the age of 16 Joyce was moved to the adult section of the hospital, a place that “oozed with despair”. Despite her medicine-induced brain fog, she was still able to pray and was “offered a life-saving route to God” when she was granted permission to go to the chapel in the grounds of the hospital for just 15 minutes a day – all by herself. She was able to do this for more than 10 years and “poured out my worries, my fears, my confusion, my hurts and my longings”. Joyce says, “It was the medicine I needed to give me the will to carry on. I always felt uplifted after my times in the hospital church.” She firmly believes that if a member of staff had heard her outpourings she would have received more ‘treatments’.

It’s not surprising that depression became her illness after remaining in a psychiatric hospital for so long and taking a range of prescription medicines that were not only unnecessary but also harmful. This young woman who once represented her school in athletics had now lost the use of her limbs due to the effects of excessive medication. Joyce also received more than 300 ECTs (electric convulsive therapy) over 12 years which she says made no difference to her depression. She was “terrified” of the treatment, describing it as “a crime against humanity”.

Along with other patients, Joyce was sedated at night, given regular doses of laxatives that would leave her doubled up in pain, and insulin, not because she was a diabetic but to induce coma as part of an experimental treatment. At these times she says, “it was as if I was holding on to the hem of [Jesus’] robe for dear life and did not intend to let go.”

Despite these horrors, there were occasional glimmers of hope and touches of kindness. She was able to write Christian poetry for the hospital magazine and received encouragement from some staff and fellow patients. Then out of the blue she received a letter from a friend from Sunday school days called Phyllis, now a Baptist deaconess, inviting her to stay for a short holiday. After pleading with staff to let her go but scared at the prospect of this new freedom, as well as the repercussions if she breached the conditions, she went. During this time Joyce committed her life to Christ and “the Lord started to do something special”.

Her way out of the psychiatric hospital came when the same friend, along with three other Christians, wrote repeatedly to Joyce’s psychiatrist asking if she could be moved to a Christian rehabilitation home that was opening in Kent. It was a mammoth struggle gaining permission, but eventually Joyce was released into their care. She was 28 years old.
The mental and physical damage she had suffered over the years had gone much deeper than she had imagined. “I had been stripped of everything that makes a person whole and become institutionalised.” It took much adjustment and support from people like the Christian family who also took her in. Today Joyce lives in her own home in Somerset and in 2004, just short of her 60th birthday, was finally discharged from all care from the mental health services.

A few years ago she was invited to take part in the award-winning Radio 4 documentary In the Bin and during the making of the programme was taken back to Tone Vale Hospital where she had spent so many dark years.

“I did not want to be there,” admits Joyce. “I didn’t realise that it was to be part of the programme. There were signs up saying ‘Children’ and ‘School’ and the place was being turned into luxury flats. I felt then that it should have been condemned and razed to the ground – I still do actually.”

It’s been a long road back to full health, but Joyce can now speak openly and honestly about her experiences and how to give appropriate care and support to people with mental health issues. She regularly gives talks to mental health groups, trainee social workers and churches. “Last week at church I spoke on the subject of forgiveness. I had to learn how to forgive those people who took most of my life away.”

Joyce does reception duties at her church in Yeovil and is always ready to offer a listening ear. “I call myself ‘an unloading machine’ because that’s what I can offer people. There was a time in my life when I was told I would never achieve anything.

“All the experiences I have been through are behind me in a giant bin with a lid on,” says Joyce. “I only remove that lid now if one of those experiences can be used to help someone who is facing a similar situation. I have a wonderful life now.”

+ The Light in My Mind by Joyce Passmore is available for £6 inc p&p from Yeovil Community Church, The Gate Way, Addlewell Lane, Yeovil, Somerset BA20 1QN.
Please make cheques payable to ‘Joyce Passmore’. All proceeds will go to the charity Hope for Kids International.

+ Joyce is available for speaking engagements and you can contact her at the above address or e-mail joy.passmore@aol.co.uk