His identity was lost 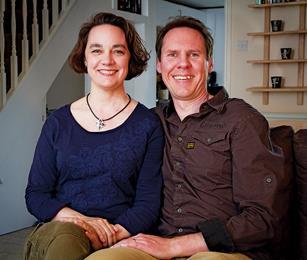 Broadcaster, speaker and author Sheridan Voysey talks to Amy Boucher Pye about dealing with doubts and disappointment, and how his daily Bible reading helped him to rebuild his life

My wife Merryn and I have faced some of life’s battering winds. The fiercest so far occurred while we attempted to start a family. After what became a decade-long journey – trying everything from special diets, healing prayer, and in vitro fertilisation to an agonising two-year wait on an Australian adoption list – we finally brought our dream of parenting to an end and moved to England to start our lives again.

“How are you doing now?” my friend Adrian asked a few months later. “On the whole, we’re doing OK,” I said. “Merryn has a good job now and doesn’t cry about the past as much. We’re trying to focus on the upside of being childless and the opportunities it brings. You know, like having the freedom to travel.”

Adrian answered, “There may be some benefits in you and Merryn being childless, but other times you’ll find it difficult and lonely. But if you follow Jesus’ example who, when he was dying on the cross, yet ministered to others; out of your suffering will come opportunities to serve people in ways you otherwise never could have.”

His wisdom would quickly bear fruit, for shortly afterwards I wrote Resurrection Year, the book that recounts our story with the aim of helping others start again after their own broken dreams. Our suffering would begin to be redeemed.

When we first arrived in Oxford, Merryn and I were walking down the street when we heard someone’s mobile phone ring. The person behind us answered it with, “Oh, Lord Astonbury! How marvellous to hear from you.” It was a far cry from the “How ya goin’ mate?” greeting we were used to in Australia!

Apart from some settling-in challenges you’d expect from an international move: having to learn which clothing stores were which; discovering Jif is a brand of lemon juice, not oven cleaner; struggling to open bank accounts (you can’t get an account without a credit rating, and you can’t get a credit rating without paying bills into a bank account) – our move was fairly hassle-free. I love the British landscape, history and dry sense of humour. I have been tripped up, though, with the British reluctance to say what one really thinks. I’ve seen some ingenious ways of saying no without actually using the word!

When we decided to move to the UK we agreed this was a medium to long-term move. We have no plans of returning to Australia – we love it here. The hardest part, though, is being so far away from family. In the last 18 months my mother and father have both been hospitalised. I flew back on one occasion, but there’s only so much you can do when you don’t live around the corner.

Moving to the UK meant leaving my fulfilling career in broadcasting, and, for the first time in years, I no longer knew who I was or why I was here. In search of an anchor, I decided to embark on an experiment – to read Jesus’ Sermon on the Mount every day for a month.

Before I knew it, the Sermon had taken hold of me and one month stretched into three. For there I found a guide to the essential aspects of life: our callings, relationships, practices, choices. From sex to prayer to conflict to possessions, the Sermon covers the grittiest of topics without embarrassment or apology. In it I discovered the radical idea that ‘little people’ like us are God’s change agents in the world. And in it I read that if we put Jesus’ words into practice we will lead resilient lives – lives that bounce back after difficulty.

My reading of the Sermon each day began to shape me – revising my priorities, keeping desires in check, putting my dreams into perspective, influencing how I should act. In living out the Sermon, I failed as much as I made progress, and still do. But because perfection isn’t possible, perfection wasn’t the point. My heart was slowly being recalibrated to the heart of Jesus, who lived out everything he preached. Without my realising it, this was all helping me to start again.

Jesus calls his disciples to do just two things: to be with him, and to be sent out from him (Mark 3:14). I see this as the basic rhythm of the Christian life. We’re with him through prayer, study and reflection, getting our directions; we’re then sent from him to do what we’ve been directed. I try, and sometimes fail, to live this out on both a daily level (clarifying with him what I should be focusing on that day), and at the broader level (discerning what I should be doing in each season of life). The spiritual disciplines then slot into this basic rhythm of retreat and action. They’re a two-beat rhythm; if you take one of the beats away, you stand still.

The disciplines I particularly hold dear are prayer, Bible study, and solitude/reflection time, including journaling. Since my experiment with the Sermon on the Mount, which resulted in me writing Resilient, I’ve also fallen in love with the Lord’s Prayer and pray it slowly once or twice daily, letting each line prompt all sorts of exploration. Praying “Your kingdom come” keeps my dreams in their place; praying “forgive us as we forgive those who’ve sinned against us” helps me deal with grievances quickly. It’s a comprehensive prayer that covers God, mission, forgiveness, spiritual warfare and provision.

Some of the people I’ve met expect no personal guidance from God whatsoever apart from the general direction of Scripture, while others seem to hear God speak from every sunset, flower bud or random event in their day. There have been times when I’ve heard that “still, small” voice whisper something for me, or someone else and it’s proven to be true and life giving. Yet, at other times, I’ve thought I’ve heard God’s voice and got it wrong. And when Merryn and I were walking through infertility we sought God on every choice we faced – whether to do IVF, to adopt, to stay childless – and didn’t have clear guidance for a decade. Looking back, maybe that lack of clarity was itself telling.

I believe we can and should seek God’s specific, personal guidance for our lives through prayer, Scripture, waiting on God in silence, and by checking what we think we’ve heard with godly people for confirmation. And if God is who God says he is, we need to also allow him to remain silent at times while walking forward as faithfully as we can.

“How do you give up on a dream without regretting what might have been?” Renee asked me this after she and her husband had spent years trying to start a family. After numerous rounds of IVF treatment and several years waiting to adopt, they were exhausted and were considering calling their journey to an end.

I started to share some advice, but soon realised something else was lurking behind her question. I believed her real concern could be phrased like this: “If we make the wrong choice, will our lives be ruined?” Renee agreed this was her deeper fear.

Any of us can harbour this fear when making decisions about our future. It isn’t uncommon to have “what if?” questions haunt us. We fear our lives will be ruined if we don’t make the perfect choice. But fear doesn’t need to dominate our lives. As Jesus says in his Sermon, none of us know the future (Matthew 6:34). We’re not meant to. Instead we’re called to walk with God, place our future into his hands, live by his heart, listen for his voice, seek the wisdom of others, and make the wisest choice we can. If we end up heading in the wrong direction, he can put us right. God can work even a poor choice into the tapestry of our lives.

“Your life will not be over if you choose to end your search for a family,” I told Renee. “Trust God to take you somewhere new, whatever you decide.”

Merryn and I have both faced seasons of doubt in our lives, but over different things. In my first book, Unseen Footprints, I describe going through a period of doubt about God’s existence while studying at Bible College (of all places). Merryn has never doubted God’s existence, but during our decade of infertility, having prayed our hearts out while trying almost every possible way to start a family, she did begin to doubt God’s goodness.

I know of no other way to get through such seasons apart from continuing to walk with God however you can, and finding godly, gracious and safe people to share your doubts with. My three months of doubt were dark but broke one night after crying out to God. Merryn’s doubt dampened her faith for some years; only in recent times has it begun to grow warm again. If you stay walking with God through the darkness, you may not have all your “why?” questions answered by the end, but you will find some answers; see his presence in your life in other ways, or see him use your pain in redemptive ways – as we’ve experienced.

Writing my life as a short story? Here’s how I’d like it to go:
The once shy boy with blond hair and few friends grew up to become a champion of faith, a beacon of light, a font of insight, a (humble) success. When he spoke, heaven opened. When he wrote, angels wept. People hung on his every word. Wisdom flowed from his lips, love emanated from his soul, miracles fell from his fingertips, and every hardship he faced with confidence and tenacity. Respected by many, loved by all, he died at peace leaving a legacy of faith and writings that went on to inspire generations to come.

But I think this may be closer to reality:
The once shy boy with blond hair and few friends survived the bullies, came to faith in his teens, and went on to play his part in the story of God. He poured his heart and soul into whatever he did. His success was small, but valued. He loved God in a fumbling, faltering way. He loved others the same – never feeling like he’d quite done enough. In his forties he stopped worrying what people thought, stopped fretting about gifts he didn’t have, and learned to rest and play as well as work.
By the end of his days he’d seen some disappointments become victories and his life become significant – because of the love and cleverness of Jesus. He died flawed but faithful, and loved by those who mattered most – trusting that the things he’d said and the words he’d written had opened some eyes to see the face of God.