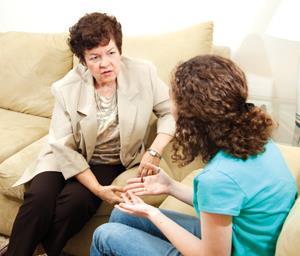 "Before my first session of therapy I was really nervous. It was hard not knowing what to expect. The first stage was an assessment… I didn’t know what they were going to ask. I knew I wanted to start therapy, but I couldn’t put into words why,” says Alicia.*

Once she got started on her first proper session of therapy, Alicia says it was “so much easier” than she had expected. “I felt comfortable straight away; the room was really calm. I still went away not knowing just what it was going to be like to be in therapy, but I felt more comfortable once I knew what the format would be.”

Alicia continued in psychodynamic therapy once a week for nine months. “I ended up talking a lot about my experiences growing up, and my childhood,” she says. “I began to understand some of my childhood experiences and how they’ve influenced me. It gave me freedom to be able to face myself. I also began to recognise the positive things; what I’ve been able to achieve, and that I’m not defined by my past experiences.

“In terms of my relationship with God, I would have mini revelations in the sessions and then be able to go home and pray about it,” she says. “I told God: ‘I don’t want to be defined by my experiences, I want to be defined by who I am in you.’ Some sessions were harder than others, and harder to process, but God was involved in it all. Therapy helped me to communicate my needs and feelings, and that helped me know what I needed to pray for… it did draw me closer to God.”

Debate has historically surrounded the question of whether Christians should engage in psychotherapy (otherwise known as counselling, or talk therapy). However, in Mere Christianity, C S Lewis writes, “… Psychoanalysis in itself … is not in the least contradictory to Christianity. Its technique overlaps with Christian morality at some points and it would not be a bad thing if every person knew something about it.” So how can therapy be of help to a Christian, in particular?

Gwen Spall, a Christian who has worked for almost seven years as a counsellor based in a secondary school, says that for Christians and non-Christians alike, “The relationship between counsellor and client allows clients to explore their issues at a really deep level. The safety of the relationship is really important. The counsellor facilitates a journey, through which the client can make decisions, and really see things. It’s like the fog clears when you have counselling … perspectives change. You gain strength, and if you have lost the power to control your life, you get that back.”

Rob Waller, consultant psychiatrist and co-director of Mind and Soul (which explores the relationship between Christianity and mental health) says therapy can be instrumental in facilitating a process of change in our hearts and lives. “Our faith and the Bible give us a destination for our lives. But what we are often not good at, as Christians, is change methodology. We can find ourselves thinking that change happens … by trying to have more faith, putting more money in the offering or simply trying harder. Talk therapies offer robust levers to take you through the steps necessary for change, and to perhaps help you uncut some of the ingrained ways of your past.”

At this point it may be useful to highlight that ‘Christian Counselling’ is a term that has often caused confusion. Most churches will encourage those struggling with a range of pastoral issues to speak to and pray with a more experienced Christian – in some cases this person has been referred to as a ‘Christian counsellor’. The directors of Mind and Soul say, “There is a significant difference between a pastoral meeting and a counselling session. All counsellors, Christian or secular, should have undertaken professional training, be accredited, accountable and supervised as well as undertaking sessions in a suitable environment.”

So how do you know when you need to go into therapy? Gwen Spall says that you should give it serious consideration “if you are consistently going back for prayer, and you don’t feel that you are getting any resolution on the issue …”.

Rob Waller points out the importance of factoring in a person’s mental wellness as part of the decision as to what kind of counselling or therapy would be best for them. “The more a person is actually struggling with mental illness – as opposed to just needing to talk – the more you need actual therapy in addition to, or as part of, Christian pastoral support. Sometimes, a problem among Christians is that they go to talk to someone from their church because that person is a Christian too, but what they actually need is talk therapy which could be better got from a secular counsellor (for example via your GP who should be faith neutral, and may well see your faith as a positive thing for you).”

In looking for a suitable counsellor or therapist, you may like to research the various approaches taken to therapy and the issues or mental health problems that they are each regularly used to treat. The most common models are cognitive behavioural therapy (CBT), person-centred, psychodynamic, Gestalt and group therapy.

“Some consideration of the models is important, but research shows that no particular model comes out on top,” says Gwen. “The most important thing is the quality of the relationship between counsellor and client – this is what helps people to resolve their issues. If you try a counsellor and find you can’t build rapport with them, I encourage you to try to find someone with whom you do connect.”

“The key thing, when you are searching for a counsellor, is to look for the word ‘accredited’,” says Rob, who recommends looking at the ACC website for an up-to-date list of UK Christian counsellors. Counsellors in your area could also be found through the British Association for Counselling and Psychotherapy  or the Counselling Directory.

Is it wisest for a Christian to see a therapist of the same faith? “Whether you have a good Christian counsellor, or a good secular counsellor, it’s about the quality of the relationship that you have with them…” Gwen emphasises.

Judith Smith, a Christian psychodynamic therapist says, “Sometimes Christians feel that they have to see a Christian therapist. This isn’t necessary, but if they are seeing a secular therapist, they could find a mentor or a good Christian friend who could pray with them through the things that come up in the sessions.”

Although Judith is trained in a secular form of therapy, she always prays for her clients before she sees them, and if they are also Christians, she offers to pray with them at the end of the session. “As Christians we want to acknowledge that we have a spiritual side too, and it is important for us that in everything that we do, God is also there.”

The second century Saint Irenaeus once said, “Man fully alive is the glory of God”. Perhaps it is time for the Church to embrace psychotherapy as one of many ways through which God can bring men and women fully alive, to his glory.

* not her real name.

Joyce Meyer, Battlefield of the Mind (Hodder and Stoughton, 2008)