Mum Lucy Rycroft was delighted when her talented son was picked for the local football team, until she realised that matches were on a Sunday morning. Here, she explains why she insists on church before activities for her children. 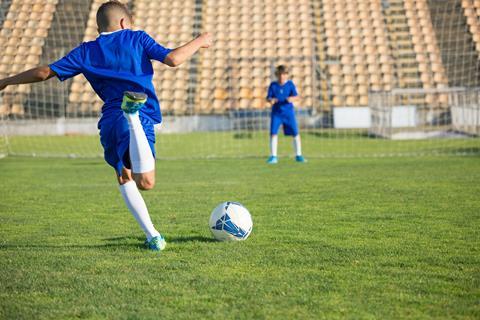 All parents want their kids to excel at something. We’ll tell you we don’t mind. Like we’re only really interested in their health and happiness, blah blah blah. But really, show us the teeniest tiniest talent from one of our darlings, and we’ll come over all Soccer Mom, bragging to the neighbourhood and secretly dreaming of being thanked in a champion’s speech in twenty years’ time.

For my son, it’s football. He lives, breathes and eats it – which is ironic, as neither me nor his dad were ever fussed by the sport until God gave us this child. As a baby, he would do keepy-uppies in his bouncer; as a not-yet-two-year-old he could drop-kick like the best of them (we have video evidence); and, as a four-year-old, he swore his allegiance to Aston Villa, encouraged by our Brummie lodger.

I remember very clearly the text message asking if he’d like to join a local team. My heart swelled with pride because – as I’ve already intimated – all of us with footballing kids secretly want them to be the next Beckham. Heworth Under-7s was hardly Man United – but it was a start.

My heart quickly sank. Matches took place on Sunday mornings, the same time as our church gatherings. With a vicar-dad and three younger siblings, our son would struggle to commit to the team. But logistical problems were not really the issue: we wanted our boy to be part of a regular worshipping community.

Church is God’s plan for the growth of his kingdom – it’s not just another take-it-or-leave-it offering on the extra-curricular platter.

This is no thoughtless legalism. Church is God’s plan for the growth of his kingdom – it’s not just another take-it-or-leave-it offering on the extra-curricular platter. We want our kids to be encouraged by friendships with Christians their own age because we know how valuable our Christian friends have been in our own discipleship. We want them to have older Christian role models who can inspire them because – hard as it might be to believe – there will be a day when we become infinitely uncool in the eyes of our children.

We want them to experience Bible teaching and worship with other believers because this is the lifeblood of a day-in-day-out walk with God. Sundays are not the sum of our children’s discipleship – we wouldn’t say no to the odd party or competition – but they’re an extremely important ingredient. Above all, we’ve always wanted our children to know that the reason for our existence is to glorify God: that the worship of our Creator comes above the worship of his creation.

In the six intervening years, our son has enjoyed excellent (midweek) football training, numerous opportunities to play with friends and – now at secondary school – a place on the coveted Year 7 football team. More importantly, he has a growing faith of his own. He loves coming to church, enjoys friendship with others his age, has some fabulous older role models, and serves on the worship team.

I’ve shared with him that famous line spoken by Eric Liddell in the film Chariots of Fire: “God made me for a purpose – and when I run, I feel his pleasure.” I believe that God gave my son a talent – and I hope he feels God’s pleasure as he plays. Aside from Sundays, we’ve tried to give him every opportunity to play the beautiful game.

As a result of being spotted in the school team, he’s now training with a local Under-12 squad. Matches are on Sunday mornings, but he won’t play those till next academic year, and his coaches are happy with him playing just one in three Sunday morning matches so that he can attend church the rest of the time. After a year, the matches will move to Sunday afternoons – no church clash!

And, by the grace of God, a new Sunday evening youth group has recently started at our church – meaning that our son will enjoy weekly Christian fellowship every week, regardless of whether he’s been at church in the morning. The combination of all these providences is a true gift from God: an undeserved grace, a fulfilment of the promise that God will honour those who honour Him (1 Samuel 2:30).

God gives us talents – but, more than that, He gives us his son. What good are all the accomplishments in the world, if we miss out on the greatest relationship? It is our prayer for our son that, above football and everything else he enjoys in life, he would love, honour and enjoy God forever.

Lucy RycroftLucy Rycroft blogs about faith, family life and adoption at The Hope-Filled Family. She’s the author of Redeeming Advent and Deborah and Jael, and lives in York with her husband and four children. When not writing or listening to four voices all speaking at once, she loves to cook, make music, play games and watch good comedy.