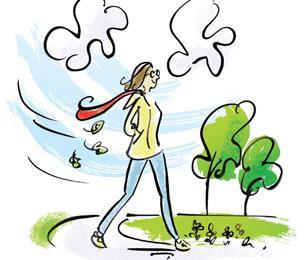 Mindfulness might be the latest craze, but it really can be helpful, both mentally and spiritually, says Veronica Zundel ...

A friend posted recently on Facebook a rather sneering comment about ‘mindfulness’, calling it “the new Transcendental Meditation”. Now I don’t know much about transcendental meditation, nor do I wish to, but I did go on a free mindfulness course last year and so I know a lot more about mindfulness than she does.

As I understand it, transcendental meditation (as with many other forms of meditation) is about mentally leaving this world behind, entering into an exalted state of consciousness in which earthly things don’t seem to matter at all. Mindfulness, if I’ve got it right, is the exact opposite. It’s all about becoming more conscious of the world around you, as well as of your own physical and mental feelings. Yes, it does involve some meditation (as does prayer!) but it’s very physically focused, encouraging the practitioner to become aware of her bodily sensations, of whether she is relaxed or tense, is breathing freely or tied up in knots.

And the major thing I discovered on my course (which was designed to help carers cope with the everyday demands on them) was that I was already practising mindfulness, and had been for some time. Let me explain.

Since I had an eye health scare earlier this year (retinal haemorrhages in both eyes), I have been walking for at least half an hour every weekday, to exercise my heart and reduce my blood pressure and cholesterol. To make the walks more interesting, I have incorporated into them a spiritual discipline I ‘invented’ a while ago: on each weekday I concentrate on one of my five senses. So on Mondays I look carefully around me, noticing colourful flowers, interesting house decorations, clouds. On Tuesdays it’s taste, which means I often end my walk in a café and have a little something. On Wednesdays, touch – feeling the wind blow; Thursdays, smell (flowers or the local chippy); Fridays, hearing (children playing, a car stereo). There’s always something to observe.

Now you may wonder in what sense this is a ‘spiritual discipline’. We are so used to seeing ‘spirit’ opposed to ‘matter’, an opposition that comes from Greek philosophy and would not have been recognised by Jesus or any of his Jewish contemporaries. They believed that the material world is God’s world, and that every atom of it reveals God. To think otherwise is to skate dangerously near to the heresy of Manicheanism, in which there are two gods, a good one and an evil one, and the physical creation was made by the evil one, so that to be spiritual is to escape from it.
Jesus, on the other hand, clearly loved creation and drew his parables from wild flowers, birds, trees and human activities such as baking and sweeping (interestingly, often from traditionally female tasks).

So, in cultivating awareness of the world around me, I am in fact being spiritual: learning to encounter God’s presence in what God has made. I am also being mindful: living in the present moment, focusing on what I see and hear and smell and feel, instead of worrying about what happens next or what I have to do tomorrow. And this is really all mindfulness is: yes, it has Buddhist roots, but since it has no intrinsic religious content, and is simply a technique, it is perfectly kosher (if I may borrow a Jewish word!) for Christians.

The other day I saw (again on Facebook – I really don’t spend all my time there!) a ‘prescription’ for dealing with a panic attack. I may not have remembered all the numbers right, but it basically recommended that in a state of panic, you should look for five things you can see, four things you can hear, three things you can touch, two things you can smell and one thing you can taste. It is a method of ‘grounding’ yourself in what surrounds you, and thus changing the focus from the inner feelings of fear and anxiety. And that, in its essence, is mindfulness.

Most of you will know that in the past 35 plus years, I have suffered from recurrent depression and exhaustion. Traditional ‘talk therapy’ has been an enormous help in discovering the roots of the cycle, but in my experience it can only take you so far, and sometimes knowing the reasons doesn’t actually provide a solution.

In the past three or four years I have turned to Cognitive Behavioural Therapy, which aims to identify the mental habits and unwarranted beliefs (such as ‘I am worthless’ or ‘Everything always goes wrong for me’) that keep one enslaved to depression. Latterly, as I said, I have added mindfulness to this. Friends, it has been a huge transformation. I’m still on medication, though only the minimum dose, and I do get down occasionally, but generally speaking my mental health is massively better. How can that be anything other than a gift from God?