Tola-Doll Fisher felt devastated when cancer resurfaced after a large tumour had been removed from her uterus. But a brave decision gave her a peace that surpassed earthly understanding

Earlier this year, a lump in my abdomen turned out to be an aggressively growing germ cell tumour in my uterus. My abdomen was so extended I looked about six months pregnant. The ‘mass’, as my oncology team called it, was pushing against surrounding organs, causing me to have symptoms that were scarily similar to pregnancy. My ankles were swollen, I constantly needed a wee and I was almost permanently exhausted. 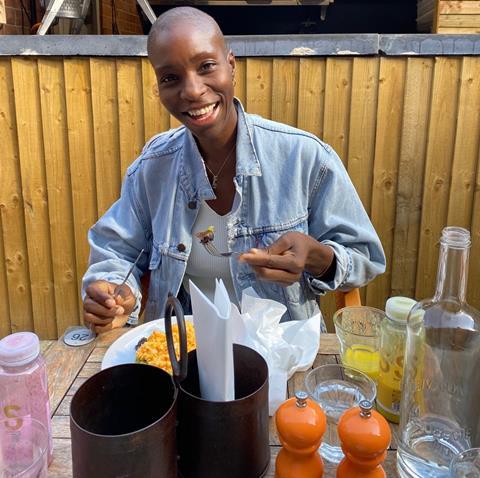 From bad to worse

Thankfully, it was caught early and I had an operation to remove the tumour, along with my left ovary and fallopian tube. I was left with a long wound, starting just below my breasts and finishing in the middle of my pubic bone. After five blood transfusions, my body felt like it had been through a war, but I was out of hospital in just three days.

Having been through that ordeal, I thought the worst was over, but then my lovely consultant called two months later to say that my last blood result had a numerical value of more than 1,000 (compared with six for someone without cancer, 30,000 before my op and 300 after it), showing there was still cancer in my body. Having celebrated what some had described as a phoenix-style recovery, I appeared to be back at square one. I was scared. I was anxious. I wept. Would I lose my other ovary? Would I lose my hair? Would I lose my life?

Cancer sucks, obviously. But from my perspective, chemo sucks more. When I told my registrar after my second horrific cycle that I would not be coming back for the third and final dose, she asked me to hold on. Within minutes I was being (nicely) confronted by a roomful of senior oncology staff, who told me they were so close to curing this disease and wanted to know what was so bad that I didn’t want to continue with the course of chemo.

I told them it was the hearing loss that the audiologist had said was irreversible. It was being hooked up to three hardcore drugs for 72 hours straight. It was the mouth ulcers, the skin peeling, the skin pigmentation, the nausea, the headaches, the hair loss, the hot flushes and the absolute exhaustion. I told them chemotherapy had robbed me of life.

But that’s not why I stopped chemo. I made a personal decision to stop because chemotherapy is poisonous and I didn’t want to be attacked by drugs in the hope that they might kill the bad cells and leave the good cells alone. I ultimately believed that God would heal me.

Knowing, but not knowing

So, along with a lot of prayer, I focused on my diet, regular exercise and various less invasive treatments. I did all I could to keep stress levels down, since stress is a huge factor in any kind of ill health. I went back to doing daily yoga and eschewing coffee, champagne and croissants for a plant-based, gluten-free, dairy-free, sugar-free, low-salt diet. I’d spent almost three decades doing whatever I want, so if a few changes were needed to live a full and beautiful existence, I was ready for it.

Last month I had a call from my oncologist to give me the results of my recent blood test. It had been about ten weeks since my last chemotherapy treatment and they wanted to check for evidence of cancer cells in my body. I was holding my breath; knowing, but not knowing that God had healed me.

She told me the marker was at 6.9, and I was overwhelmed with joy and peace. The same joy and peace that had somehow been there right in the middle of the situation, before I knew the outcome. Better still, my oncology team called this week to say that my tumour marker is now at two!

When I first got sick I asked every praying person I knew to pray for me, and I was encouraged when a friend told me she had a vision where I was lying in bed, surrounded by angels. There were many low moments this year and throughout treatment, but I often felt like I was literally covered in prayer, and that has been amazing. I’m so grateful for everyone who took time to ask God for my healing, and I thank him that he has done it.