It wasn’t until my husband and I separated that we realised we’d been complacent, now we’re stronger than ever

During Marriage Week UK, May 10-16, writer Claire Musters shares how the most painful period in her marriage actually strengthened it. 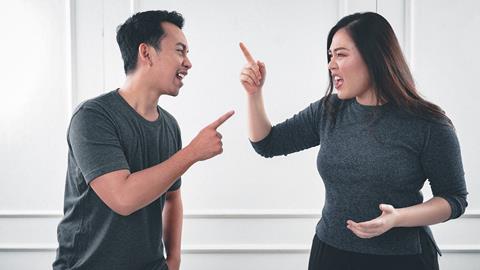 “I slumped on the mat in our entrance hall. The proverbial rug had truly been pulled out from under my feet. As I sat there, though, an unwelcome thought lodged in my head: how complacent must I have been not to have seen this coming?”

That is what my husband wrote at the start of the first chapter of our book on marriage, describing the moments just after I had walked out of the door, saying I couldn’t carry on any longer. It had been an agonising decision, but I felt that our lifestyle was toxic to both our relationship and our growth as people and, at the time, couldn’t see another way forward. That began a period of separation in which we both wrestled long and hard about whether our marriage had a future. He was certain – I was not. But what we both realised is that we had been complacent, had not put our marriage in its rightful place and had allowed pain and hurt to fester and invade every part of our lives.

The theme of this year’s Marriage Week is: “What’s your secret?” For us, it was being laid bare – everything stripped back so that we came face to face with the mess we had made of our lives. We had fallen into a rhythm of disfunction, and were only just surviving – never thriving.

During the time I spent living back with my parents I can remember acknowledging and processing the deep anguish that I felt. But once God had tenderly cared for my wounds, I also needed to work through the part I had played in our marriage break down. Pride, hurt, selfishness, a sense of entitlement – these were all things I had allowed to wreak havoc. While I had tried to bring it all before God and ask for his help, ultimately my heart had been divided and I had chosen to trust in others rather than him for my future.

Once we had made the decision to really work on our marriage, humility and grace were key – as well as a whole lot of forgiveness! We took time to build in the foundations that had been missing before.

That was more than 15 years ago now and, even though we have written a book on marriage, we know that we are still learning, still growing – and still making mistakes. Each time we counsel couples as they prepare for marriage, we are challenged again as the process highlights to us areas we could do with working on again.

Somehow, as Christians, we can have the tendency to assume that with God in our marriage and with the right tools we can have the perfect marriage. And yet we forget we are fallen beings that, yes, are being perfected, but that perfection won’t arrive until heaven and so we are navigating life as two “works in progress”. This means there will be a lot of mess along the way – and a huge need for humility from each partner as well as grace towards one another.

And, as we’ve come to learn, suffering is often the way that God shapes and moulds us, so it is a unique marriage indeed that doesn’t include suffering of some form or other. As we face an incredibly painful season in our family, we are clinging to God afresh and learning again the importance of intentionally turning towards one another to face the difficulties together.

Ultimately, it is no secret that we all desperately need God in our marriages – and need to keep surrendering our own wills, ideas and wants as we live out an example of God’s covenant love towards his people.

And finally, our marriage book, Grace-Filled Marriage has just turned one! As part of our celebrations we are offering a ten per cent discount on single orders as well as free postage – please email me on cmusters@icloud.com if you would like to find out more – or to arrange a discount for multiple copies. We have also provided a series of videos to accompany the book, through the Big Church Read.