‘Let’s value the roles of the housewife and mother again’ 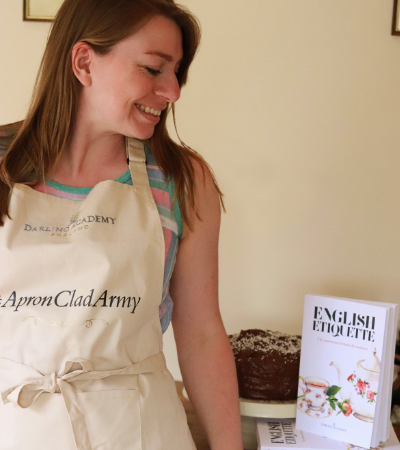 Alena Kate Pettitt looks exactly as you might expect for a traditional English housewife. She wears 1950s-style dresses with smartly tied aprons and seems to carry around a baking bowl and spoon everywhere she goes. If you want the perfect cake, she knows the recipe for it; if you want to know how to make a cup of tea, she’ll show you. But Alena is a young woman in her 30s with a degree, so why has she chosen this lifestyle?

“A lot of people look at me and see me as a kind of virginal Stepford Wife who has been made in a factory, but actually I had a proper full-on sex, drugs and rock and roll lifestyle before”, Alena explains. “It took something of a crisis, just after I had my son, that made me turn towards God and gain an understanding of my purpose here on earth.”

A negative view of housewives

It’s easy to turn your nose up at the thinking that, in 2020, someone can find their complete purpose in staying at home rather than going out to work – regardless of gender. I asked Alena what she says when asked the age-old question: What do you do?

“When I tell people I’m a housewife, I can sense them switch off immediately. People just think oh, that’s boring, what do you really want to do? Or they say, I bet you can’t wait to get back to work. And I have to say no, this is work, and actually I really enjoy it!

“It’s the same within Christian and non-Christian circles and it has made me realise how little we value the role of the housewife and mother in modern society. I wear 50s-style clothing and collect vintage teapots and things because that’s just what I like. I did some research into that era and discovered that it was the last time the role of housewife was revered.”

She explains: “Part of that was social engineering of course, because after the war, during which women stepped out of traditional roles to help the war effort, the government wanted women to go back into their homes. So they really promoted the role of the housewife and put her on a pedestal; you’ll find a lot of advertising from the 50s and 60s was centered around the housewife. This is something that the media picks up when it talks about housewives today, but she is painted as a downtrodden woman who doesn’t know her own mind or choose her own life.”

If, like me, you’re partial to a bit of reality TV you’ll have noticed several depictions of housewives – and none are particularly positive. The Real Housewives series shows women married to wealthy men who spend most of their time arguing and bitching about each other. In Wife Swap, a show in which wives from two different families change places with the other to see how the other half lives, the housewives are often shown to be dissatisfied, lonely and unappreciated.

I asked Alena how that portrayal makes her feel about her own decision. “I worked in marketing in the beauty industry for years and it looked as though I was hugely successful – and I was – but I wasn’t happy. My husband and I discussed me staying home and it felt right, for both of us. I knew it was what I was called to do.”

So what is that exactly? I tell Alena that my impression of English housewives is that they live in big country houses and make breakfast for the family dressed in fluffy mules and posh dressing gowns from Liberty. Alena laughs, a warm and friendly laugh – she is far from offended. “Well, we don’t sit around in dressing gowns all day!

“The thing is, the term ‘housewife’ is often misinterpreted. A lot of women that consider themselves traditional housewives are still working so it’s about mindset. They take on the Proverbs 31 role in the sense that they contribute to their family, fully. They know that they are highly prized in their ability to nurture and create a nest for their family, but they are still working outside of it.

“Housewives who work inside the home are often really engaged within their communities and have a wide range of social interactions, which help create really positive engagement. They might volunteer, help the old lady down the road, help their friends out when their [friend’s] children are ill and they’ve still got to work and so on. The housewife just becomes a real central figure and in a culture starved of community – we need that.”

The recent #TradWife movement, where young women in their 30s and 40s have eschewed outside employment to work at home has, unfortunately, been connected to white supremacy movements and the alternative right. In order to challenge those who might dismiss her as a white middle-class woman seen to portray a rather traditionalist view of womanhood, I ask Alena to speak into this.

“I get this a lot,” she says with a sigh. “I think the term #TradWife had its season, and did the job in sharing the freedom of women to choose to live this way in modern culture. In my Facebook group there are over 2,000 women who are housewives from all over the world and the Americans in the group make a point of sharing that they are not connected to these far-right groups and don’t support Trump etc. But I’ve noticed that a lot of the negative press making these connections [between the far-right groups and the #TradWife movement] is written by younger, single women, who, in the name of feminism, seem intent on tearing housewives down.”

It’s a difficult conversation to have and to defend. But Alena tells me that God gave her a scripture six years ago that, in hindsight, prepared her for this time.

“I was writing my first book at the time, Ladies Like Us, in which I share my testimony of coming to know Christ. I didn’t have an audience then and had no idea who it would reach and I was just sitting on the sofa when I received this scripture from the Holy Spirit. It was Esther 4:14, which says, ‘For if you remain silent at this time, relief and deliverance for the Jews will arise from another place, but you and your father’s family will perish. And who knows but that you have come to your royal position for such a time as this?’ And then, as I was sat there contemplating it, my husband called from another room and said, ‘I’ve just had a word from God!’ I asked, ‘What is it?’ And he said, ‘It’s Esther 4:14.’ I felt the blood drain from my face and I went completely white.

“I’ve clung to that ever since, knowing that there is a reason for all of this. It wasn’t until early this year that The Darling Academy became widely known. At the end of 2019 I made a YouTube video about why I liked being a traditional housewife and it was picked up by the BBC. It was released in January and then suddenly I was getting these calls from news outlets all over the world! It went viral very quickly but I know it was God’s timing, and that word reminds me of that.”

One thing Alena says she repeatedly comes up against is the idea that she and women like her are turning their backs on the fight for women to go out and make their own money.

“I have had women say to me: we fought hard so that you could go out to work…so go out! But my understanding of equality in the workplace was to give women the ability to make their own decisions around how they spend their time and I wholeheartedly stand behind that. And that’s exactly what I’m doing, I’m choosing to stay at home. Freedom is being able to make that choice and not saying, ‘OK woman you should be at work now.’ That’s just as bad as forcing all women to stay at home.”

So she doesn’t think all women should be housewives? “No! Not at all! I’ve never, ever said that. We are created by God to do what we’re meant to do and be who we are meant to be. Each of us has our own path to walk and some of us may not even get married.

“I’m only standing behind the women who do want it, who want that life but don’t feel seen and valued in the modern world. Feeling valued is something we should all feel, so I’m just making sure that happens for housewives too.”

Alena lives with her husband and son in the Cotswolds. Her two books, Ladies Like Us and English Etiquette are available on Amazon and she is currently working on a third. You can read more from Alena on her website, which celebrates “traditional family values, good manners, and lifestyle”.