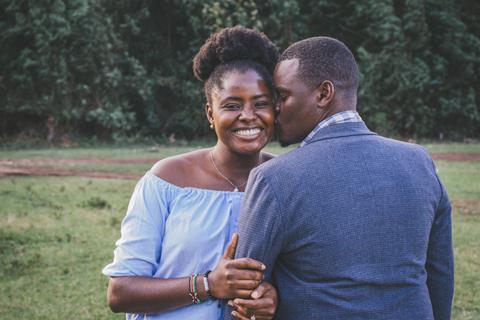 MR: You have been giving talks to groups on the topic of sex, so what made you both begin this journey of thinking it is important to talk about in a church context?

Adrian: We've been doing quite a lot of work with married couples and realised you can't really talk about marriage and not talk about intimacy. Also, we felt that we wanted to regain some ground - the world is always talking about sex! One of the strange things that we pointed out in the book is that the world talks a lot about sex, but couples don't have that much sex in the world, or are having less sex. We wanted to say, "There's a better way!", which is God's way. We felt no one else has really written about this from a biblical point of view so we really wanted to do that.

MR: You've alluded to the fact that sex is pretty much everywhere in the world, whether it's on reality TV shows or magazines, so do you think there's a sense in which we, as a Church, have misunderstood sexual intimacy being something for the world?

Celia: I think we're just overwhelmed. It's almost impossible to turn on a TV programme, watch a box set or read a book without sex being right there. So we're a little bit overwhelmed by it. We know it's got a place, but we're not quite sure. Can we really be that positive about it? And when we know there's so much badness in the world, and so many bad things going on, so we want to redeem that.

MR: Adrian mentioned that couples are actually perhaps having less sex and being less physically intimate in their relationships, so have surveys been carried out asking people about these kinds of intimate things?

Celia: Yes, they have. Can you believe it? People are willing to join in! Obviously it depends on who you ask as to how accurate these surveys are, but yes. There is a national survey which is about the attitudes towards sex and lifestyle done every 10 years.

MR: Is there anything these statistics that has perhaps surprised you or shocked you?

Celia: Well, I think just the [low] levels of sex that is going on, even in committed marriage relationships. It's quite shocking. There are a lot of sexless marriages out there, which is sad, really. One of the things that has changed is the amount of 'solo sex', as we could call it, going on as well. It's sad that people are looking for something in terms of sex, but not necessarily with a partner, which obviously we would be concerned about. Lockdown hasn't helped.

Adrian: There was a study produced in the British Medical Journal back in November, which was from Australia, but very similar context of the UK, not amongst Christian couples specifically, but amongst all couples, showing that people are having less sex during lockdown than before, which is kind of counterintuitive. You think people have got more time at home, but actually people are weary, people are tired, people are exhausted. So often in marriages, sex is one of the first things to go, which is a shame, because it's such an important part of marriage.

Adrian and Celia Reynolds' book ‘Closer’ discusses the challenges couples may face and provides statistics to inform the conversation.