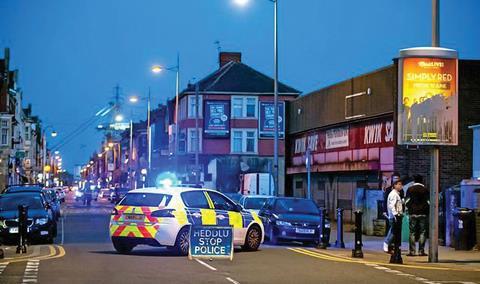 Of course, most folk want that fame to reflect well on them or their community, and when that doesn’t happen, the impact of a negative piece can be immense, such is the power of the media.

As Christians, however, we know that the reporting of a bad situation, or being negative, or even having done wrong, is not the end of the story. It’s merely the beginning, if Christian women (or indeed, men), are minded to bring Jesus into the equation through prayer and presence. He and He alone can offer the forgiveness that we all need, and the transformation that we all hope for in our communities.

One example of that titanic clash of Kingdom vs chaos is starting to happen in ‘the country’s most violent street,’ as described by the Daily Express in its feature in June.

Commercial Street, located in Pillgwenlly (colloquially named ‘Pill’), a suburb of Newport in South Wales, has been statistically singled out as the location with the most undesirable postcode in the UK!

The Express article was prompted by and based on a report by the former Victims’ Commissioner for England and Wales, Baroness Newlove. It makes grim reading and pulls no punches in what she sees as an ineffectual long-term response from the authorities to the issues which the Pill community has faced over many years.

Many in the community, it would seem, agree with her.

“Drug dealing goes on night and day, and residents are under the constant threat of having their homes being broken into,” commented one resident. Another added, “Pillgwenlly, has always been poor but in the past, people were honest and decent. Now prostitutes are everywhere, there’s drinking, fighting and an air of menace at night. You won’t catch me around here after 6pm.”

Some, however, argue that various community initiatives which have been set up are bearing fruit and maybe the media and others should be offering a more positive outlook.

One local businessman says, “As a society we should be looking at how we can build community cohesion rather than finding ways to knock it down. Bad publicity for the area doesn’t only last a day for those residents and their children who are trying to achieve a better life for themselves.”

Agree or disagree, the statistics speak for themselves. Between April 2018 and March 2019 there were 249 anti-social behaviour incidents, 97 drugs offences and 171 public order incidents in Pill. There were also 394 violent crimes, 19 robberies and 65 burglaries. The figure for criminal damage and arson offences was 198. In March alone, 165 crimes were reported, compared with 137 the previous month.

Despite the police, shopkeepers and residents all pulling together to counter what has been described locally as ‘the toxic nature of anti-social behaviour’, the situation continues to deteriorate.

You might wonder where the church has been in the midst of all of this chaos. Many folk have.

God moves in His mysterious ways and we should not be surprised that in the midst of this bleak situation, He has been devising His plan. For Him, there are no ‘no go’ areas.

Two years ago, He prompted Rev Justin Groves, vicar of St Paul’s Church in a neighbouring part of Newport, and his wife, Lucy, to take note of the distress and disillusionment that was evident less than a mile from his Parish.

Thereby began a somewhat unique initiative which saw Rev Groves invite two local women, Freddie Whincup and Mary Kinchin from his own St Paul’s congregation, to learn more about the community issues which its neighbouring Anglican church, St Stephen’s in Pill, was facing. Groves sent these willing, local women to ‘spy out the land’, to see if they could help identify ways in which the church might engage more with the problems in the area. He saw their initial role as being an encouraging presence within a discouraged church community.

Fortunately it was a challenge that these two determined missionary ladies, sent from one part of God’s church to another, were willing to take up. Quite quickly, they identified a lack of confidence and desire in the church to get involved in the struggles outside of its four walls – and therein lay the challenge.

And so, in the spring of 2017, they started the process of blessing the folk from St Stephen’s.

“We began by getting to know the local congregation, encouraging them and praying with them,” says Mary. “Then we made connection with the local schools, police and community groups here. This area has a high percentage of Muslim families and we’ve been available to engage with them and have had some interesting conversations. We’ve also invited people to the church. We hold our neighbours dear.”

After several months with this previously depleted congregation, Freddie and Mary saw that things were beginning to change and now, following a more recent perfect storm of subsequent circumstances (God’s mysterious ways, perhaps) which is likely to see the closure of St Paul’s church itself, the Groves have brought the two congregations together at St Stephen’s and initiated what Justin calls ‘blended’ morning services there every Sunday morning, while later in the day, St Paul’s continues – for the time being, at any rate – to host its own evening services.

“The style of worship at St Stephen’s has changed and the focus of teaching and prayer has been more outward looking,” according to Lucy. “Our prayers are focusing on community needs more than before.”

God’s plan for Pill is beginning to take shape, it would seem. Freddie and Mary have prepared the ground, and now the focus is on outreach and harvest.

“There’s been drugs and prostitution in Pill since my childhood, and I’m 70 now,” says Freddie. “Pill’s got a label and it’s probably got worse in recent years. The Church in the area probably hasn’t done much to help tackle it in the past. It hasn’t engaged in outreach to the young and vulnerable here. But there is a sense that this could be a new beginning.”

And Pill needs a new beginning even though God’s heart for this part of Newport has never wavered. Project Pill is now well underway following, according to Rev Groves, “much prayer and behind the scenes planning with the Archdeacon and the church in Wales”.

And today, two years on, Freddie and Mary’s faithful and pioneering work is beginning to pay dividends. According to Mary, “we’ve seen quite a big change. The church is much more welcoming now and younger people and some musicians are coming in.”

That view is confirmed by Lucy Groves, who says, “It’s early days but there has been a definite shift in the way St Stephen’s is viewing its challenges, both internally and outside in the community. The church is growing, a couple of African families have joined us and we now have a children’s group. But we have established a good and regular morning pattern of worship and the potential is immense.”

The future of Pill looks more hopeful. An active, concerned church is essential to the wellbeing of a community, and God’s timing is perfect. What the future will bring, no one knows. But Justin and Lucy Groves believe that the church to which they have been called – a mere stone’s throw from where they have been serving for more than a decade, is looking and wanting to be at the heart of the Pill community.

“We want St Stephen’s to be a place where people feel welcome, where people can come,” says Lucy. “It’s like Pill is a lost corner of Wales, on an island. We would like to open up the hall to invite folk in and engage with need in the community, and then see a knock-on effect of activity and growth which makes people notice and wonder what might be going on here. We know it’s going to be hard but people who are on the journey with us think it’s exciting, and so do we.”

The call upon Justin and Lucy – a couple called from the leafy Home Counties to serve in Newport over two decades ago – together with Welsh pioneer missionaries Freddie and Mary, now in their mature years, demonstrates how God, in His miraculous way, brings disparate people together to restore His church for His Kingdom building purposes – even in the seemingly most hopeless of places._

Woman Alive readers can support this project through prayer, for Justin and Lucy, Freddie and Mary, and the church in the community.