I'm in love with a non-Christian... 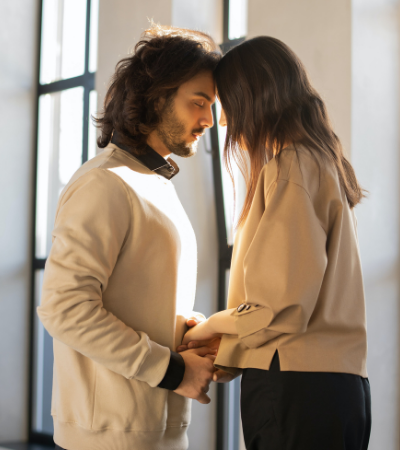 If you fall in love with a non-Christian, you’re likely to experience a barrage of emotions: guilt because Christian friends and family unite in telling you that you shouldn’t; defensiveness – this is the person I’ve chosen to be with; bewilderment – how can something that feels so right be wrong? Six women shared their stories of being in a relationship with someone who isn’t a Christian with Clare Blake.

When Ruth*, 38, married Bekai*, a Muslim, she was shocked and hurt when some people reacted like she’d have been better off marrying someone without a faith at all. She explains: “It’s Bekai’s Muslim faith that has made him who he is, the man I love.”

Bringing two cultures and two faiths together was a steep learning curve. It was hard for Bekai, originally from warm, friendly Gambia, to adjust to life in the UK, while Ruth faced challenges in adapting to Muslim culture. “Ramadan was particularly tricky, learning how best to support Bekai while he fasted.” A Christian marrying a Muslim also isn’t common. “I certainly felt my daughter and I didn’t tick the right boxes for the ‘Christian-couples-with-kids’ gang at church. I felt like an outsider.” The solution was a more inclusive church where, over time, Ruth has become much bolder in sharing her situation. “Actually, seeing Bekai so strong in his faith encourages me to be strong in mine. Most importantly, I know I’m precious to God and he wants me in his church family just as much as any woman with a Christian husband or boyfriend.”

Laura, 34, was running away from God and started sleeping with Dan, a non-Christian. But a few months later, she felt God tugging at her heart. “I knew the road I was on was not where God wanted me to be.” Laura signed up to a ‘joining the church’ course and God confronted her that night. Would she put him first or Dan? “I loved Dan, but in a Holy Spirit moment God said really clearly: ‘You’ve got to stop sleeping with him.’ I was shaking when I told Dan, but to my surprise he just said, ‘OK, we’ll stop.’” That could have been the end of their relationship, but God had other plans.

One Sunday Dan caved in to Laura’s pleas to go to church with her. He feared it would be full of weirdos, but looking round he recognised good mates he’d met playing football. Then someone had a word of knowledge about a groin injury; Dan had recently pulled a muscle out on the pitch. Was God real after all? It blew Dan’s mind and shortly afterwards he became a Christian. Now married for almost ten years, Dan and Laura have two lovely boys.

Growing up in a Christian home, Chloe*, 27, never thought she’d date a non-Christian. “When I told my parents about Matt*, they were kind, but I could tell they were disappointed.” Matt has always been happy for Chloe to go to church, but seven years into their relationship they are at a crossroads where either they get married or split up. Chloe shares: “Our biggest debate is kid-related. If we have kids, will they go to church or not? What happens if they become Christians? It feels quite painful. Being with a Christian would probably have been easier, but Matt makes me happy, and I can’t imagine life without him. I can’t help asking God: ‘Why have you let me love him so much if this is wrong?’”

Leaving him in God’s hands

Ros and Tim married when neither of them were Christians. The first ten years were utterly miserable because Ros had bipolar. “I was a nightmare. Some days I wouldn’t even wash and I was extremely aggressive. Poor Tim.” But everything changed when Ros ended up at a friend’s church after her cousin died in a tragic diving accident. “That night I gave my life to the Lord and for three weeks I couldn’t stop crying. I was overwhelmed by Jesus’ love.”

God healed Ros of bipolar, but Tim still didn’t become a Christian and Ros got increasingly frustrated. “Our marriage hit a rocky patch and I considered separation and even divorce, but God didn’t want that.” A marriage course helped them rekindle their love and now, having been married for 51 years, they are closer than ever. Ros has learned to leave Tim in God’s hands. “God gave me a promise that one day Tim will stand with me. I can’t wait!

A passion for seekers

Maria*, 53, and Geoff* were both Christians when they married in South Africa. After moving to the UK they drifted away from the Church and, sadly, Geoff lost his faith. When she became a mum, Maria recommitted her life and started going to church again with her kids, but as they got older, they opted to stay home with their dad. “I feel sad that I don’t have the people I love most alongside me, but 1 Corinthians 7:14 says that the non-believing husband is sanctified by his believing wife, so I’ve always felt I can stand in the gap for them.” Maria’s situation makes her sensitive to those seeking God. “Because I so long for my family to know God, it has really sharpened my desire for people to come to faith.”

Angie’s quiet belief didn’t stand a chance against the vehement views of her husband Marc, a ‘born-again atheist’. After a whirlwind courtship and marriage, they moved to Surrey where Marc became a beat officer and met Robin, a committed Christian. The two would hotly debate Christianity for hours. Marc even went along to an Alpha, but only lasted a few sessions. If Angie ever tried to talk about what they’d heard, Marc just shot her down in flames.

Fast forward 13 years and Marc was deputising for a heavily pregnant Angie at a school harvest festival service. The vicar talked simply about the miracle of seeds and growing, but it had the strangest effect on Marc – like chills running through his body. In a God-incident shortly afterwards, Robin got in touch, saying God had put Marc on his heart. This time Marc was ready to listen. Angie could barely contain her excitement. “It was like the air was electric. I was praying, ‘Lord, help him see you, because if he does, you’ll get me as well. I’m here. I’m waiting.’”

Marc’s simple prayer to know God that night was dramatically answered the next morning. “My world was turned upside down. Everything looked and felt different. I absolutely knew that God was real.” Marc is now rector of the East Clyst Churches Mission Community, which consists of ten churches.

Marc believes nothing is more powerful than prayer: “Don’t ever say: ‘There’s no point talking to my husband or boyfriend anymore because he would never become a Christian. How dare we limit God by saying he could never soften that person’s heart, that the Holy Spirit could never act in that person’s life to open their eyes. Angie didn’t give up on me. Don’t you give up either.”

*Some names have been changed to facilitate greater openness.