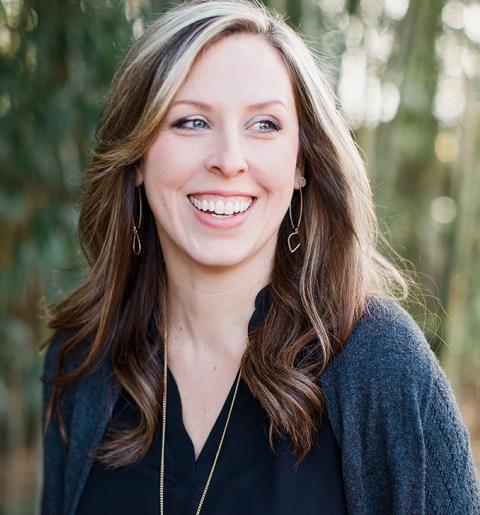 Glenna could be forgiven for asking God what on earth was going on with her life and, at times, she did just that. Marrying young, Glenna and her husband decided to have children early on…except they couldn’t. Two years into their marriage, Glenna received a devastating blow when the doctor told her she would probably never conceive. Just a week later, she had to move to a new town and a new church with her pastor husband. That church was to be the source of incredible pain for them, and caused her to shut down emotionally in order to protect herself. Glenna and her husband decided to adopt but, even in that decision, there was a lot of heartache. She then experienced mysterious pain, which was eventually diagnosed as Ankylosing Spondylitis, an auto-immune disease that, if left untreated, fuses the vertebrae of the spine together. She says:

When I was growing up in the 80s and 90s, the church denomination I was a part of did not usually preach straight through scripture (exposition). When you stay on topics that are pleasing to the ear, you tend to skip passages that are difficult to swallow. You miss so much! I do not remember being taught that following Jesus would include suffering. Once I began studying the Bible as an adult, and sitting under solid teaching in church, I realised that Jesus promised suffering, Paul guaranteed it, John assured us of it, Peter expected it, and James called it blessing. This was new to me! And it changed the way I viewed both my suffering and others’.

When I was told I was unlikely to ever conceive, my faith didn’t completely crumble (because the Lord was steadfastly holding on to me), but it sustained a huge blow. Because of my aforementioned misunderstanding of suffering, I didn’t understand how God could be good while also withholding what seemed good to me. I figured that if he was holding back, then I needed more than what he chose to give.

When I then had to move town and church, I swallowed a lot of my pain. I stuffed it down because I had to. Nobody in our new church wanted a broken pastor’s wife. I felt this need to be strong, so I just pasted a smile on my face and kept a healthy distance so no one would see the cracks.

When we took on that church, not realising it was already failing, we had to learn to just be faithful, to show up and be present even when we were hurt and broken. We learned the hard way that ministry isn’t done for our glory but for God’s, and he gets glory in our weaknesses.

I eventually learned that God had taken us there to let our dreams die, but it was years before I really began to fight the sin of bitterness. I held people at arm’s length for the simple reason that they had no trouble conceiving and I did. I went into self-protection mode, which isn’t always a terrible choice, but for me it was sinfully motivated because I was angry. I held others responsible for my deferred hopes. There was no dying to self, no sacrificial love. I thought only of my loss. But because the Lord was still working out his good purposes in my life, he revealed my sin to me. He drew me into his word and uncovered my neediness for him. In that process, I began to repent from my self-focus and bitterness. Everything changed when I moved away from looking at myself and looked toward him instead.

We can view silence from God as absence because we tend to see God with human eyes, to make him in our own image, so to speak. We have all experienced the failure to follow through from people we love, so when the Lord seems silent or holds a steady “no” to our prayers, we are quick to defect. We read our experiences into his character when really it should be the other way around.

We equate goodness with fulfilled desires. So, when God says “no” to even a good desire, we gauge his goodness by his refusals. And I think that is a disbelief in both his goodness and his sovereignty. We simply cannot know what is best for us and what will bring him most glory because we are not sovereign – we cannot see the whole picture of his plans. Sometimes his refusals are kindnesses. And if he chooses to say “no” because it keeps us coming back to him with our neediness, then there is goodness in that kind of dependence. What better place could we be than near his side?

We are slaves to tunnel vision. Whatever is tangible, near, easy to reproduce – that’s what we answer our longings with. Think about the ways we answer deeper needs like loneliness or fear with created things like food, drink, material possessions, cathartic experiences. We know that food or a new outfit cannot make us less lonely or less afraid. But we reach for lowhanging fruit because it’s low, easy and costs less than dependence on Christ. And our sinful natures are bent toward self-sufficiency, which is just the oldest lie of time. Satan worked off that one in the garden.

Dark nights of the soul are when we learn absolute dependence upon God alone. It’s what we cannot learn when we have everything our flesh desires, so, in their absence, that’s when we really get to see that the Lord is all we need. And that he is enough.

We adopted our eldest son in 2008, and I learned that even when the Lord answers our prayers, our hearts must be set on the Giver, not the gift. Nothing the Lord gives us can hold the weight of our heart’s satisfaction. People will let us down, lives are fragile, dreams can be broken. Our contentment must be on the One we pray to, not what we pray for.

For years, my approach to scripture was to use my Bible like a physician’s desk reference. I’d look for verses that seemed to speak to my specific circumstances and then close my Bible wondering why I didn’t feel better. I didn’t understand that there was a large, overarching story that had everything to do with God himself and how he loves his people. But when we approach the word looking for extra, specific meanings that aren’t there, we are essentially saying, “God, what you’ve already said isn’t enough. Give me something more.” We’re saying that his inspired, inerrant, holy word isn’t enough for us! That’s just the height of pride – thinking that we need more than what he has given to his people historically. He has always, always given us exactly what we need.

I began reading the Bible asking one question: “Who are You, Lord?” I read and read and read, and wrote down every answer to that question. I began to see the story of God and his promise to be with his people forever. I saw his character up close – faithful, just, constant, kind, slow to anger, abounding in love, strong, sovereign, holy, near. And seeing him for who he was changed my heart’s posture toward him. I no longer saw him as withholding; I saw him as patient and wise.

In the years prior to the unravelling of our second adoption, God had been using the past pains of church hurt, infertility and chronic pain to teach me to depend on him. He’d anchored my hope in scripture, so, when we entered this terribly hard season, he had wired my default response: go to the word. So I did. And I camped out in the Psalms for a good year or more. The raw grief of the psalmists comforted me because it gave me the language of lament. I could air my pain before the Lord and still have hope in him. That’s the beauty of the Psalms– there is room for pain and peace. They can co-exist.

We belong to God, but we’re not yet home with him forever. So, his kingdom has come but it is still coming in fullness. As we persevere through trials and suffering, we keep an eye on our eternal home in his presence forever. We are running for a prize that’s coming one day. And it will eclipse every broken dream, deferred hope and earthly pain. He is worth our perseverance.

FAITH-FILLED HOOKS FOR CLINGING ON TO GOD DURING OUR WILDERNESS EXPERIENCES:

• Recount the ways God has been faithful to you in the past.

• Scripture is a gift – saturate your life in the stories of God’s historic faithfulness.

• Learn more about who he is; we don’t have to worry about the how when we know the who. As we gaze at his character, it cultivates trust in his plans – however long he takes.

• Recognise that God’s blessing for us isn’t the removal of suffering but the perseverance learned in it. Desperation breeds dependence on God. And in that dependence, we learn perseverance which, when it does its work, leads to fullness in Christ (see James 1).

• Learn to lament – the Psalms provide beautiful examples. We can experience pain and peace together.

Glenna Marshall is a writer, speaker and musician. She tells her story in The Promise is His Presence: Why God is always enough (P&R Publishing). Find out more about it, and her new book Everyday Faithfulness (publishing in June, Crossway) at glennamarshall.com