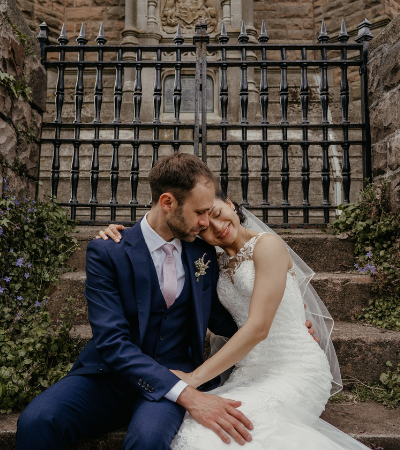 There’s no doubt dating online can be frustrating and sometimes seem a massive waste of time, but God can use even the internet as Matt, 37, and Michele, 35 and Ajay, 32 and Emma, 29, discovered…

Michele felt secretly ashamed to be online dating but traditional dating had her nowhere and, having paid her subscription, she thought she might as well see who was out there. She was struck by a guy called Matt who had really kind eyes. However, when she looked deeper into his background, alarm bells started to ring as he was divorced with an eleven-year-old son. “He looked like a nice person and we had lots in common but I just wasn’t prepared to get into a complicated relationship, so I parked it.”

A difficult past marriage had shaken Matt’s confidence, but he still hoped that through online dating he might find someone to love who also loved him. He knew his situation wasn’t ideal so he didn’t take it personally when Michele didn’t reply, though he was disappointed. “Michele just seemed like a really interesting person.”

Michele got totally absorbed in a demanding new job so it was a whole year later before she reactivated her account, only for Matt’s details to come up again. Michele remembered his email and how honest he had been rather than concealing his situation. That made her thoughtful and, by the following morning, she had decided to respond.

Emma would have loved a romantic encounter, perhaps meeting at a dance like her grandparents, but she had to settle for online dating when she couldn’t find anyone locally. She found it quite draining: “You’re putting yourself out there but people don’t necessarily reply and you start to think: ‘Is something wrong with me?’” After several unsuccessful dates, she changed tack. “I considered anyone who was a Christian, close to Bristol and seemed OK. Ajay was all those things – and also quite handsome!”

Ajay found online dating changed his mindset. “Being British Asian means you don’t really feel British but you don’t really feel Asian either. Earlier in my life, I was only interested in Asian girls. It took me several years to realise my true identity was in Christ so I needed to be open to whoever God wanted for me.”

After three weeks of emailing, Matt travelled to Bristol to meet Michele, desperately hoping they would have the same connection in person as they had over email. “Within about 10–15 minutes, I thought: ‘There’s definitely something here.’” Michele had felt very nervous beforehand but they ended up talking non-stop until the restaurant they were in was closing. Both felt slightly dazed at the strength of their connection.

But it wasn’t just Matt that Michele needed to connect with. Much thought and prayer went into her first meeting with Noah, Matt’s son, but their day out at a bowling alley proved a huge success. Matt was overjoyed at how well they all got on.

For Emma, the first meeting with Ajay, essentially a date with a virtual stranger, was quite nerve-wracking, but Ajay took a more relaxed approach. “I didn’t put myself under pressure that Emma might be my wife or even my girlfriend – I just got on with being me.”

It was a good date and led to a couple more, but Emma was overwhelmed by work pressures and felt she was getting out of her depth. “Normally for a Christian girl the problem is that guys aren’t keen, but Ajay really was and at the time I was so stressed that I just couldn’t cope with it. I told Ajay our relationship couldn’t continue.”

Ajay knew there was no point getting angry or defensive so he accepted Emma’s decision and wished her well for the future. But instead of making Emma less stressed, her decision made her feel even worse. She had a horrible feeling that she’d just made a terrible mistake, which was confirmed when she felt God say to her: “I’ve given him to you. Why are you chucking this away?” It was difficult to do, but Emma knew it was time to humble her pride and admit to Ajay she’d been wrong.

When Emma called Ajay, he was tempted to reject her. “In my head I thought: ‘I’ll listen to what she has to say, but I’m not going to bother with her’, but there was something in my heart that could only be God, telling me: ‘She is the right person.’”

Matt also had a lot of anxiety when Michele travelled back to Malaysia to see her family, as he feared they’d think he was unsuitable and persuade her to break up with him. Meeting Michele on her return and finding that that hadn’t happened was one of the happiest moments of his life.

Romance in the air

Matt knew he wanted to marry Michele very quickly. “I remember texting my brother within the first month, saying, ‘She’s great – I think I’m going to marry her.’” Noah’s reaction when Matt sounded him out about remarrying was also reassuringly chilled, as he and Michele were by now great friends. When it came to making a decision over who should hand Matt the wedding ring to put on Michele’s finger on their big day, Matt and Michele were in total agreement – it could only be Noah.

This wasn’t to be their only celebration though, as Matt and Michele travelled to Malaysia for a special formal dinner with Michele’s relatives and friends who hadn’t been able to come to the UK. As Michele and her new husband poured sparkling wine into the glistening pyramid of glasses in preparation for the traditional wedding toast, she smiled at him, certain in her heart that she’d made the right choice: “Matt’s the only guy I’ve never felt insecure with. I trust him, he makes me laugh and I can be myself with him.”

For Ajay and Emma, now confident that God meant them to be together, things moved fast. Emma was driving home from work when Ajay first said “I love you.” He just dropped it into a conversation so casually that Emma was convinced she’d misheard – until Ajay said it again. They got engaged in December 2016 – seven months after they first met - but Ajay had signalled his intention months before by picking a Haribo ring out of a bowl of sweets at church and slipping it onto Emma’s finger.

Their wedding day included elements of both their backgrounds. Instead of a hen night Emma had a mehndi, a traditional women-only henna party to celebrate the bride, but adding a Christian twist with prayers for the couple’s future happiness. Ajay wore a suit and Emma a stunning white wedding dress for the service, which included prayers in both Hindi and English and a beautiful Hindi worship song. At the reception a troupe of graceful women dancers performed to the beat of a traditional Indian dhol and halfway through the newlywed couple changed into gorgeous traditional Indian wedding attire in rich jewel colours. For Ajay and Emma, it was far more than just a fusion of two cultures, as Emma explains: “As a Christian couple we believe you create your own culture so our wedding was all about what’s important to us. It was our perfect day.”

Our advice on online dating

If you are considering using an online dating ser vice, here we offer some hints based on our own experiences:

Matt: Be aware of how online dating can affect you mentally and don’t let it get you down. Take a break if you need to.

Michele: Go into it cautiously, use godly wisdom and set boundaries, but also be open-minded.

Ajay: Even if it hasn’t worked out in the past , stay and show people who you are – otherwise you might miss the potential of something working out.

Emma: Spend time actually talking to people to get to know them, as even the best profiles are one-dimensional.