Buy this book and you might save someone's life

Bedbound poet Jenny Rowbory refuses to be defined by her broken body. Instead she is raising money for a life-changing operation through her anthology We Are the Winter People 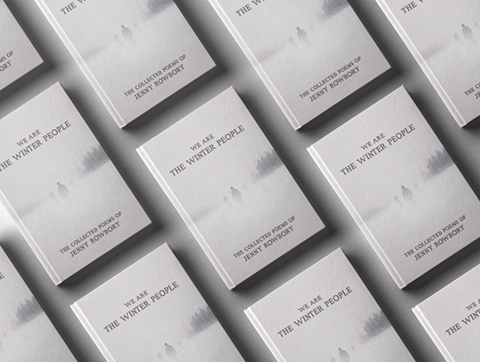 We often talk about how a book has changed our lives, but it’s much rarer to hear of a book that can actually save a life. This is the aim behind Jenny Rowbory’s eloquent anthology We Are the Winter People, as proceeds from sales will go towards funding a complex operation by a pioneering US neurosurgeon to correct disastrous complications from earlier surgery.

Jenny has lived with pain on an unimaginable scale since contracting a virus at university when she was 18. She is now 35 and lies trapped in her hospital bed like some enchanted princess in a fairy story…except nobody has come to free her from her prison of pain. Patio doors enable stretcher access for Jenny’s numerous ambulance journeys while special curtains exclude all light, as her eyes are extremely light-sensitive. The slightest noise hurts her ears so the buzzers used to summon help don’t sound in her room.

Jenny has had to let go of who she once was – a bright, happy girl who loved sport and drama and excelled academically – and come to terms with a life in stasis. She has missed out on so much. Her 29th birthday wish list wistfully asked for a first kiss: “I’m not greedy; just one kiss will do…though I don’t think it would be too shallow to ask if I could have it with a devilishly handsome man.”

The diagnosis doctors gave Jenny was ME (myalgic encephalomyelitis), which is an inflammation of the brain and spinal cord. It’s a misunderstood illness that continues to divide medical opinion, with some doctors still believing that ME is largely in the patient’s mind. Jenny has seen hundreds of doctors over the years, undergone invasive tests and been prescribed a barrage of medication. Regimes like Graded Exercise Therapy, recommended for ME under NICE guidelines (National Institute for Health and Care Excellence) have just aggravated her condition, wrecking her hands so she can no longer easily write blogs and tweets, which are her lifeline to the outside world.

At first, Jenny was convinced God would heal her: “I thought I just had to have faith so I was wheeled in my pyjamas to the front of a church miles from my home because a preacher was visiting who had healed many people…but I was very much not healed. For a long time after that, I underwent a thorough stripping down of my faith. There was a lot of rage and shouting in my head at God. What brought about a large change was listening to Wayne Jacobsen’s novel So You Don’t Want to Go to Church Anymore (Faithworks) and his life-changing Transition audio recordings.”

Refusing to be silenced

Jenny’s health has continued to spiral downwards. Simple hand gestures and signs or tracing letters on the duvet had to replace speech, which exhausted her, and in 2015 Jenny was further diagnosed with Ehlers-Danlos Syndrome (EDS). This is a condition where faulty collagen, the glue that holds us together, causes dislocations, impacting the body’s organs, muscles, ligaments and tendons. In Jenny’s case, it severely affects her neck, head and spine, but Jenny is a fighter and battles on. In her 2015 health update, Jenny wrote: “Today…even though I cannot speak, I shall not be silent. Today, hear me roar.”

Jenny discovered that when her neck was in a certain position some physical sensation returned, with regained taste and smell and less blurry vision, so when her condition became life-threatening in 2020, Jenny hoped her neck fusion surgery would mean she’d be fixed in the position where she’d experienced flashes of normality.

Unfortunately, the operation was a complete disaster. Jenny was disorientated and frightened, repeatedly tracing the word “Help”. Her mum Ann found the whole experience traumatic. “After the op, Jenny lost a lot of visual acuity. She lost urinary control. She lost the ability to hold her own head up. She lost the ability to watch TV or her Kindle. Jenny now tries to adjust the agonising position of her skull and neck 24/7.”

Jenny’s health is now extremely precarious and she hovers constantly between life and death. It would be completely understandable if she felt abandoned by God, but Jenny reflects on her experiences with him: “There have been times of feeling too hurt and betrayed by God to even think of him…but then you feel God is present, feel his love, when he holds on to your shoulders when you feel like you’re breaking.” 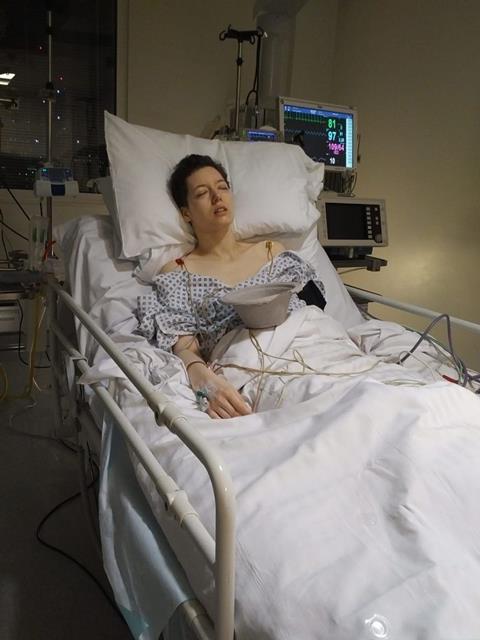 Jenny Rowbory is confined to her bed 24/7 and in constant pain. ©Ian & Ann Rowbory

This is just one theme she explores in We Are the Winter People, her extraordinary collection of poems written between the ages of 16 and 34, extraordinary not just because of the huge physical cost involved in writing them, but also because, in spite of Jenny’s immense suffering, they are ultimately hopeful.

Expressing all her emotions

Here is a woman who is unafraid to express her emotions – the pain, the disappointment and the horror, but also precious moments of intense joy. Her poems also chart her battles with God. In ‘Held’ she writes:

Pinned here
I spit and abuse you,
try to provoke you.
But your love is too great.

…the horror of reality:
we are not going to be spared…
And it hurts. It doesn’t feel like love.
Each breath stings with grief.
…Your heart cradles my heart.
We are one in Gethsemane.
If it is possible, may this cup be taken away from me.

Does Jenny have a future? The brilliant US neurosurgeonn offers hope, but the cost is prohibitive so Jenny’s family need help to get her there. Jenny’s indomitable spirit makes her hungry for life. “I know my soul is safe…but I’d rather be alive-but-suffering than dead-but-not-suffering.”

Find helpful information about ME at meassociation.org.uk or for EDS, visit ehlers-danlos.org

Jenny’s gofundme or buy We Are the Winter People as an audiobook (Google Play, Audible, iTunes etc) or ebook/paperback on Amazon. You can also purchase the audiobook/ebook direct from Jenny’s website: jkrowbory.co.uk