Elaine Storkey shows us why history is vital, through the story of Stephen 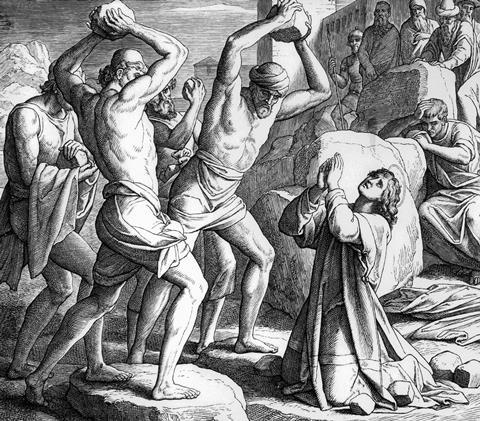 If you were at court, facing the death penalty unjustly, what would you do? I’m sure I would fight as hard as possible to clear my name. Most of us would ask witnesses to speak for us and expose the lies. But in Acts 7, we see that Stephen didn’t do any of that. Instead, he gave the court a history lesson.

You may remember the context. Stephen, a young Christian, had just been appointed a deacon in the early Church. Christian widows from the Greek community were not being given the same care and support as the Jewish widows, so new Greek-speaking deacons were chosen to sort this out. Stephen had high spiritual credentials. Despite his youth, he was recognised as someone with the gift of wisdom. Luke tells us he was full of God’s grace and power, and the Holy Spirit was already working miracles through him (see Acts 6). Inevitably, however, this meant that his preaching drew the attention of their opponents: a rigid group of religious leaders who distrusted anyone challenging their interpretation of Jewish traditions. They decided to get him out of the way.

It would have been quite possible for Stephen to deny the charges and bring people to testify that he was really preaching the good news of salvation. Instead of protesting his innocence, he embarked on a summary of Jewish history.

From Abraham to Joshua, David and Solomon

Stephen started with God’s promises to Abraham, and his journey to a new land that would be his inheritance (Acts 7:2). Stephen took his hearers through the generational line of Isaac and then Jacob, whose sons became the twelve patriarchs of Israel. From there the history continued with Jacob’s son, Joseph, and the jealousy of his brothers, who sold him into captivity (v9). God raised Joseph to power in Egypt, and he managed a famine so well that the Israelites went to Egypt for food and settled down. Hundreds of years later their sizeable presence became a threat to the king who began to oppress and enslave them.

Stephen then gave a full history of Moses, the next leader that God raised up (v20-43). He reminded them of Moses’ call by God to rescue his people and take them out of Egypt. He related Moses receiving God’s law on Mount Sinai. But he also outlined the disobedience and idolatry of the Israelites, their defiance of God’s law and their persecution of the prophets God sent to remind them of his ways. Stephen closed his list of leaders with a brief reference to Joshua, David and Solomon, and God’s warnings against wrongdoing.

So what was the point of this detailed history lesson? The religious leaders who opposed Stephen at court would have known most of it already, and could hardly disagree. Why did Stephen spend so much time on history, rather than on defending himself against their lies?

History as a witness

The answer is that history was Stephen’s defence. He had been charged with speaking against Moses, God and the law. His long story was to show that history proved the very opposite; he was honouring Moses, seeking God and upholding his law against those who denied it. Each episode told the true story of God’s blessings on the people, and the way God raised up leaders to guide them. They also revealed that, despite God’s faithfulness throughout history, people had resisted his word and disobeyed his commandments. History was Stephen’s witness. It revealed the evil that people do to those who speak the truth about God: persecuting, even murdering them.

It was time for Stephen to rest his case and bring a powerful charge against his own persecutors. His words were direct. “You stiff-necked people! Your hearts and ears are still uncircumcised. You are just like your ancestors: You always resist the Holy Spirit! Was there ever a prophet your ancestors did not persecute? They even killed those who predicted the coming of the Righteous One. And now you have betrayed and murdered him – you who have received the law that was given through angels but have not obeyed it” (vv51-53).

For Stephen, history was vital. When people are willing to listen with open ears, it tells the true story about God’s relationship with them. History discloses the reality of God’s blessings, and the destructive nature of human sin. It also unfolds the promise of redemption through Christ and the power of the Holy Spirit. Stephen was standing on historical truth. As a follower of Jesus, he was telling the same story. His opponents were not. He showed them that their tradition had been distorted by evil. They were the ones who should be standing trial.

Sadly, Stephen’s analysis was all too correct. The people were indeed hard-hearted killers who could not hear the truth. They stoned him to death, but not before he had shared his vision of Jesus now in the presence of God (vv54-60). They did not see the irony that their very actions confirmed the truth of his telling of history.

What does this teach us today?

This story from Acts invites us to understand our own history as Christians. It urges us to examine the past and uncover truths that often lie hidden and forgotten. We need to know about the early Church and how the gospel spread across the world. We need to learn about the persecutions and hardship believers have undergone for their faith. We need to hear how God’s love and truth has won through in miraculous and wonderful ways. If we are to be effective today in believing the truth, and speaking God’s word to our culture, we must learn from the past.

We are to be wary, too, of those who distort or rewrite history from any prejudiced perspective. This struck me many years ago when I was in Harare, Zimbabwe, listening to Nelson Mandela. He was challenging the fashion of dismissing Christian missionaries as simply part of Western colonial history. He argued they were motivated by love of God and commitment to serving other people. Unless we grasped that, said Mandela, we would never understand why their hospitals, schools, churches and messages of hope had made such a positive and liberating impact on Africa’s history.

Views of history compete with each other. Some historians see history as repetitive, others see it as the march of progress. Yet Christianity has left its mark on how we understand historical time. It is divided into the period before Christ, BC and the time after, AD (which stands for anno domini, the year of the Lord). Even in our secular and unbelieving age, this tacitly endorses the coming of Jesus as the most significant event of all time.

A biblical view of history doesn’t see history as inevitable, or passive. It sees history as the unfolding story of our human existence and our relationship with God through millennia. It records the destructive force of human sin in wars, bloodshed, murder, tyranny, racism and climate devastation. It also illustrates the redemptive power of love and forgiveness in faithfulness to God. It recognises that history is shaped by human beings. Every one of us is significant in creating history. Let’s pray for the Spirit’s power to do it well