Keziah Joseph was part of the team who devised and acted in ‘The Family Sex Show’, a play that hit the headlines after stirring up outrage for its sexual content for children and families. Here she explains why she supports the show and is upset by its censorship.

A lot has been said about The Family Sex Show;

“Enabling all sorts of SIN and EVIL.”

“They want our babies to have sex with each other!”

“Everyone in the show is a child grooming paedophile.”

“They should all get their computers checked for STDS.”

“Thank goodness that’s blocked and those actors doing the devil’s work, are finished!!”

Each of these quotes have actually been embellished, exaggerated or fabricated. They are therefore inaccurate. Much like most of the information I’ve seen and read in articles and petitions about the show I have been a part of devising since 2019.

In April 2022, 40,000 people signed a petition made by an extreme right wing Christian group based in Spain who shared it internationally, meaning a good percentage of those signatures were not even from the UK. Many took to social media to confidently condemn a theatre show not even finished yet and villainize a company of some of the most incredible, inclusive and loving people I’ve ever had the pleasure of working with. Some of those people are designated safeguarding leads with comprehensive safeguarding training! After threats made against us and venue staff causing the cancellation of the show and weeks of slander and misinformation, I stand even more firmly by the necessity and importance of The Family Sex Show.

I’m Kez. My pronouns are she/her and they/them. I have short black hair and big brown eyes. This is how I start the show. We all do. We introduce ourselves in an accessible way so that the audience know first and foremost we are people too.

After threats, weeks of slander and misinformation, I stand even more firmly by the necessity and importance of The Family Sex Show.

Some other details about me that factor into the show in more subtle ways and inform the pieces I’ve written and devised for the show, are that I’ve been a Christian since I was four years old, I believe in God, I practice celibacy and I have experienced numerous forms of sexual violence both in and out of the church, as a result of poor or lack of proper sex education and a culture of silence and shame that enables cycles of sexual violence.

The church should have been pioneering an attempt to end this cycle! Or at least supporting a show that teaches safeguarding, respect, consent, how to respond healthily to rejection, and celebrates the goodness of sex. Sure, many Christians believe that sex should only happen in the context of marriage, but there is an astonishing percentage who do not! I just think to my recent stint on a Christian dating app where about 90 per cent of the men I went on dates with had an issue with my celibacy and expected to have sex before marriage. 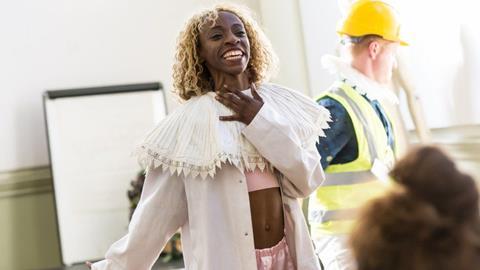 We need to get real about this! Christians are having sex and a lot of them with poor knowledge about their bodies. How many adults still think a vulva is a vagina? There’s a lot of learning & unlearning to do, but kids don’t need to get to that stage and parents don’t need to fear teaching them.

One of the big taboos challenged in the show is nakedness, particularly causing concern because of the age of the audience. There is so much shame around nudity which we as Christians believe goes right back to the fall. But that did not come from God. Perhaps I have retained some childhood innocence around nakedness because I do life drawing and regularly go to galleries and museums where there are naked bodies a-plenty in statue form (which children are seeing too, I might add). Context is so very important. I am amazed at how this has been disregarded when it comes to our show. Nudity has been hyper sexualised to the point where a naked body is now inherently sexual regardless of the reason for its nakedness! But our minds have been “conditioned” by media and film in a way that children’s have not yet! So what better time to teach them that first and foremost your body is a body? Not a sexual object. Yes! Even in a show about sex!

Our bodies are brilliant. Brilliantly different. But as Brit with a dark skinned body, I have spent a lot of my life feeling unseen and othered by lack of representation. This has not only affected my relationship with my body but also how others interact with it too, in a way that I do not believe God wants! All bodies, with their different shapes, sizes, limbs and colours are fearfully and wonderfully made, “knit together by God in the womb” as the Psalmist says. That’s what we should be teaching our kids. And one way to do this, is to have real, varied and imperfect bodies on stage.

And if you know your body, it helps you to know your rights. Education is a form of safeguarding. I thoroughly support the choice of age guidance for the show [which is five years plus], not only because it is an option that parents & guardians can take or leave, but because it is informed by the common stages of sexual development laid out by the NSPCC. It has been proven that statistically children engage with sex later in life if they have adequate sex education sooner rather than later. A statistic repeatedly ignored by people who would rather believe our agenda is to “groom and sexualise children” and encourage them to have sex now.

The show was made in consultation with the School of Sexuality Education and I personally have learnt important facts and information from them, including intersex awareness. First, some people do not even know what intersex means, and second, given that research suggests 1.7 per cent of the world’s population are born intersex, there are most likely intersex Christians! They need sex ed that acknowledges and includes them, as do trans & queer Christians.

I have been deeply concerned by the censorship at play around this show. We need to get better at disagreeing.

Something I have been deeply concerned by, is the censorship at play around this show. We need to get better at disagreeing. We need to be able to see or hear something made for all people and be ok with that meaning that some of it just won’t be for us, but some of it really will. Some of it may not be what you need, but it might really be what someone else needs! Marginalised groups are the most at risk of sexual violence. Fact. And what we teach about sex is closely connected to power. Who has the power? Who gets to talk? At this current moment, who does our limited sexual knowledge mostly benefit? Who does it put at risk? Who does it say is “normal”? Who does it value?

I believe with every fibre of my being that God wanted me to be part of this show, not only for what I could bring to the room and the discussion (Song of Solomon blew a few minds) but also for all I have learnt and the many ways I have had to humble myself because of my own ignorance.

I’ve been inspired and encouraged by other Christians engaging with this topic - author, podcaster and online educator, Kat Harris’ “The refined podcast” and “Song of songs - Exploring the divine romance” by Charlie Cleverley, in particular. Then there’s the Bible itself, I could do a whole show about sex and sexuality from just our holy book alone! Rahab, Goma, David, the book of Esther, Solomon, Ezekiel 23:20, Song of Songs, Corinthians etc…maybe I will. But don’t cancel me before I’ve even had the chance to figure out and make the show or before you’ve even seen it, please.

Although with everything that’s happened with The Family Sex Show, I’m more convinced that when someone or something is falsely accused, slandered and killed, the truth will come out and what is meant to rise again, will do so.

Keziah JosephKeziah Joseph is an award-winning actor who has worked extensively in Theatre and Radio across the UK. Credits include 'The Language of Kindness', Shoreditch Town Hall, 2021, 'The Lion, the Witch and the Wardrobe' at The Bridge Theatre, 2020 and 'Mr Gum & the Dancing Bear' at the National Theatre, 2019.