I raised more than £1k learning Psalm 22 in Hebrew, but memorising it with my 80-year-old mum was the biggest benefit

Writer Anne E Thompson felt inspired to learn Psalm 22 in Hebrew in order to improve her grasp on the language and to test her memorising skills after a brain injury. But the real perk of the exercise was doing it with her mother.

When I realised that Jesus had possibly recited Psalm 22 on the cross, reading it in biblical Hebrew was very special. I felt that I wanted to learn it, to improve my Hebrew and also to test my brain which was damaged in surgery a few years ago. I wrote an article on my blog and invited my followers to learn the psalm with me, in whichever language they wanted to. My mother, who is over eighty but still game for a challenge, agreed to learn the psalm in English. 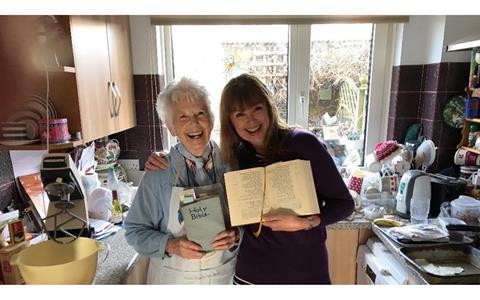 We set up a JustGiving page to raise money for Tearfund. This was harder than expected for someone with no IT skills and my children had all inconveniently grown up and left home! However, we sorted it eventually, and with some trepidation decided we would set our target at £500. Neither of us were at all sure that anyone would sponsor us, other than my husband as it was compulsory for him. Later, we raised our target to £1,000. Such excitement when we reached it!

I felt that I wanted to learn it, to improve my Hebrew and also to test my brain which was damaged in surgery a few years ago.

I have a long association with Tearfund, having supported them since childhood. I have been privileged to visit some of their work. I will never forget meeting sex workers in the red light district of Mumbai, living with an HIV positive family in a Zambian village, and chatting to women in Brazil who were learning to have independence from abusive relationships. Tearfund works in a number of areas, helping those who need support, seeing the unseen poor in our world.

We decided to make short videos around town as we learnt a section of the psalm each day. This was very scary, incredibly embarrassing and we both had instant amnesia as soon as the camera was switched on. But gradually we got used to it, we learnt to smile and tried to look natural. Not too natural though, as even though I’m 57, my mother still felt the need to tell me to comb my hair and straighten my collar. Some things never change.

We made short videos in coffee shops, standing in the check-out queue in Waitrose, at the station and a pub and outside the church. A few times people decided to walk between us while we were filming, and the video disintegrated into us giggling (not very professional). We were almost run over a couple of times, and sometimes failed completely to say the correct words - although that was mainly me! We found people to be hugely supportive. Sometimes people gave us money while we filmed, and the comments on social media were hugely encouraging. We felt cheered on, and it was a wonderful incentive.

For me, one of the highlights was simply spending time with my mum.

For me, one of the highlights was simply spending time with my mum. As we get older and busier it’s easy for family to slip into the “duty” bucket, and for us to be working together to achieve something difficult was tremendous fun. Those videos will be very special going forward, and we have made some precious memories.

If you would like to add to our sponsorship, her is the Just Giving link. Our not-very-professional videos can be seen on my Facebook page, Anne E Thompson.

Anne E ThompsonAnne E. Thompson is an author, currently studying at Spurgeon’s college. Anne writes novels which appeal to a wide readership. One of her books: ‘CLARA, A Good Psychopath?’ explores how a girl with a psychopathic personality disorder might be able to achieve more good than other people, with her disorder being a strength rather than a weakness.