Giving thanks this Thanksgiving

The woman behind the popular Woman Alive Book Club, Amy Boucher Pye, is an American living in England. Here she shares her memories of Thanksgiving, and encourages us all to take some time today to think about the things we can be grateful to God for 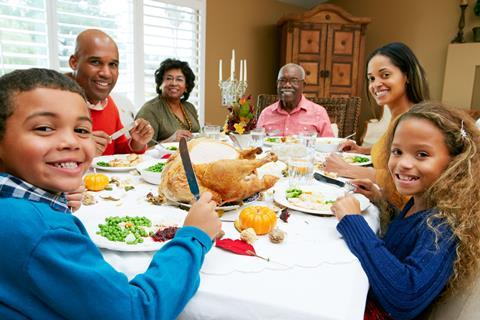 It was a Thanksgiving to remember, but for all the wrong reasons. In my early 20s, I sat eating ramen noodles in my darkened apartment in Crystal City, Virginia, a suburb of Washington DC. None of my hoped-for invitations to join a local family had panned out, and before the holiday I had told myself I wouldn’t mind. But I did. The silence seemed magnified, punctured only periodically by the sirens of emergency vehicles speeding past my window. I felt so alone.

That Thanksgiving informed those that followed, as I pledged not to go through such a roller coaster of emotions if I could avoid it. More joyful celebrations were to come – the ‘turkey trot’ we took between courses at a gathering of many singles from church; enjoying the clear roads up to Pennsylvania when I’d leave at 5am to join friends for the morning church service; squeezing in a trip to the gym for fun group exercise before adding my famous Minnesota wild rice to the heaving table of friends.

Thanksgiving is one of the least commercialised holidays in the States, with an emphasis on giving thanks and coming together as family and friends. The day is set aside for feasting, watching American football and more feasting. And many observe the tradition of each person sharing something for which they are thankful.

What’s behind this holiday?

For a long time I didn’t realise that the British celebration of harvest underpins the American Thanksgiving. The Pilgrim fathers and mothers observed days of fasting and days of feasting, one of the latter at harvest, through which the modern Thanksgiving holiday was born.

Devout in their faith, the pilgrims left England in 1608 for Amsterdam in search of religious freedom. They lived there for twelve years before the foreign culture wore them down and they decided to head for the New World. Their journey on the Mayflower, however, was desperate. The cabin where they slept was intended for 30 people, not 80. Their food rotted and became infested with insects; they nearly drowned when the ship’s main beam cracked; they endured ridicule from the sailors. They pressed on through their five-month journey across the Atlantic.

When they arrived in what is now Massachusetts, the pilgrims faced a new set of challenges: a new land called for the planting of food and the building of places to live. But they gave thanks, observing a full day of Sabbath each week. After surviving their first harsh winter, they hosted a three-day feast we now consider the first Thanksgiving. During this celebration, they gave thanks for their food, for seven houses built, for a peace treaty with the Native Americans and, most importantly, for the freedom to worship God. The women cooked, the men played games and they all shared stories and returned thanks to the Lord. They invited the Native Americans who helped them acclimatise to this strange new world to join them at their table.

This is the account I’ve always heard, but many are now contesting it – not least because of the travesties committed against the Native Americans after that first gathering. This vaunted holiday is based on what might be a lot of lore, for we only have a 115-word account from pilgrim Edward Winslow about that first Thanksgiving.

Slim historical evidence notwithstanding, the tradition grew over the years, and in 1863 President Abraham Lincoln declared that the last Thursday in November would be a national day of thanksgiving. Then in 1941, a joint resolution of both houses of Congress decreed, and President Franklin Delano Roosevelt signed into law, a bill establishing that the fourth Thursday of November will always be Thanksgiving.

Giving thanks is good

Most people don’t celebrate Thanksgiving in the UK – although many Americans gratefully gather at St Paul’s Cathedral to enjoy the service there, my family included. But we can all take the opportunity to set aside some time to “give thanks to the Lord, for he is good” (Psalm 107:1). Why not make a list of things you’re thankful for? Here are some words to jog your imagination:

This Thanksgiving, may you revel in love and laughter; may you know God’s welcome; may you enjoy giving and receiving hospitality; may you feast off the goodness of the land.

Amy Boucher PyeAmy Boucher Pye is a writer, speaker, and spiritual director. She writes devotional thoughts for several publications including Our Daily Bread and New Daylight. She is the author of several books, including 7 Ways to Pray (NavPress/Form) and Celebrating Christmas (BRF). She blogs at www.amyboucherpye.com.