Actor Ethan Hawke’s come up with a master plan to stop the war in Ukraine and it involves Pope Francis. That sounds a bit mad doesn’t it? But it’s actually not as wild as you may think. 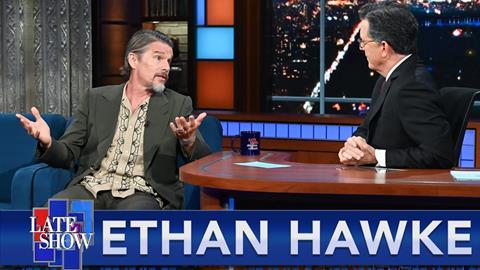 Dead Poet’s Society actor Ethan Hawke is doing the chat show rounds promoting some project or another and he’s taken the opportunity to showcase his conflict resolution ideas. This week he joined Stephen Colbert on The Late Show and, rather than share some hilarious anecdotes from on set, he decided to explain how he believed Pope Francis could end the war in Ukraine.

He said: “I had this idea that I wanted to write the Pope. And say to him that Francis of Assisi marched across the desert to the battlefield in the fifth crusade to try to have audience with the Sultan. And he did this huge act of peace. And he should have been killed, but the Sultan didn’t kill him.”

The Purge actor continued: “Pope Francis should take his namesake. And if he would do it, if he would lead a march from Belarus to Mariupol, and we would all go. And we could bring the refugees to their homes. And, like, priests and rabbis, and we could all go and say you have to stop killing children.”

Ethan’s an Episcopalian while he confirmed with the show’s host Stephen that he was a practicing Catholic. The actor went on to explain why he felt Pope Francis was the man for the job. He said: “The reason why him, I keep thinking about where the voice for non-violence is. Where is Martin Luther King? Where is Mother Teresa? Where is Nelson Mandela? Where are the voices of people to ask us to join together? And I feel like he’s one of the very few people I can think of that has that moral authority.”

I keep thinking about where the voice for non-violence is. Where is Martin Luther King? Where is Mother Teresa? Where is Nelson Mandela?

A quick bit of research revealed that Ethan’s history knowledge is bang on, as in 1219 Francis of Assisi marched across the battlefield to gain an audience with the Sultan of Egypt, Muhammad Al-Kamil. Francis hoped to bring an end to the war by surrendering himself to the Sultan’s guards. But miraculously, the Sultan and the Saint had a respectful conversation and Francis was even invited to stay with the Sultan as his guest.

Francis returned to the Crusaders and told them what had happened, desperate to convince them to stop the war but they didn’t listen. They carried on to Cairo and ended up getting stuck in the mud of the Nile and weren’t able to get their supplied. Rather than polishing them off in this moment of vulnerability, the Sultan sent them supplies for days while they regrouped. They were so moved by the gesture, they decided to surrender the territory and head home.

They were so moved by the gesture, they decided to surrender the territory and head home.

This is the incredible story Ethan Hawke is convinced that Pope Frances can duplicate. He said: “The choice shouldn’t be whether to escalate the war or for democracy to fail. I feel like the grown-ups of the world need to stand up and say: ‘You’re not allowed to bomb and kill children. You’re not allowed to do it. You gotta behave like a grown-up.’ And that way we could focus our energy on taking care of the planet and address the real [issues] that are happening right now, instead of making them up.”