American pastor Brian Sauvé sent Twitter into uproar with a post about how women dress on social media this week. Here Woman Alive’s editor Tola-Doll Fisher explains why she thinks he should be more focused on developing personal wisdom than telling others how to dress. 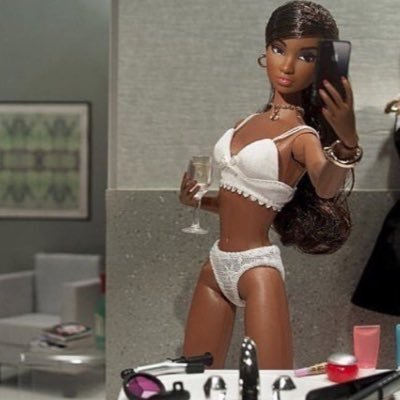 A few days ago, a tweet by a US based Christian pastor went viral: “Dear Ladies, There is no reason whatsoever for you to post pictures of yourself in low cut shirts, bikinis, bra and underwear, or anything similar—ever. Not to show your weight loss journey. Not to show your newborn baby. Not to document your birth story. - Your Brothers”

When I checked this morning, the post, which in the world of social media would be termed ‘click bait’, had garnered a thousand retweets, 7.5k likes and had been quoted 21,000 times. And in case you were in any doubt, the thousands of “Dear Brian” response tweets were not by people who agreed with his comment. Even brand giant Adidas got involved saying: “Dear Brian – All bodies should be celebrated and supported, without shame or exception. –Adidas”.

I’m currently taking a hiatus from social media, and I don’t miss it, so when this was sent on to me I sighed out loud. This is exactly the kind of unhelpful tweet that we Christians love to post to show other people the right way to live. However, whether or not you agree with the sentiment in this post – is this really the right way to go about it?

I’m a writer, author and editor in my current career path, but once upon a time I was a model and still do model occasionally. I remember at 18, walking for a brand that had designed what they called a modern wedding dress. It was a cream lace shift that only just reached the top of my thighs. It looked amazing and I had no trouble wearing it on the catwalk. I say that to explain my position as someone who has no issue with pictures of women (or men) dressed – or undressed as his tweet seems to imply – as Brian describes. 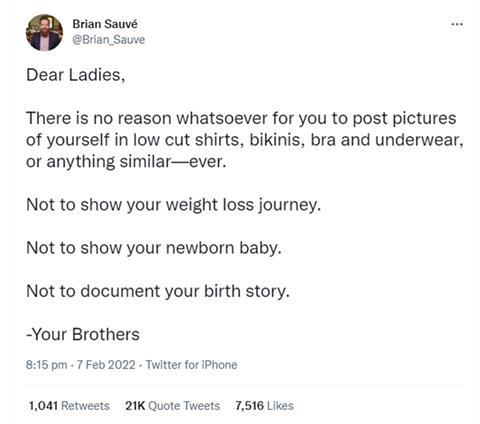 Brian Sauvé describes himself in his Twitter bio as: “Christian pastor, husband, father of 5, and classical school founder”. Imagine someone who knows nothing of the Christian faith coming across this tweet and it being their first impression of a Christian.

In the current worldly climate it seems particularly unwise for a man to be making comments about what a woman should or should not be doing with her body. And in our biblical landscape I would argue that it is equally unwise – damaging even.

A few years ago when I was writing my book, I really felt God speak to me about the words I use. As a writer, God has given me the gift of communication and he let me know that I was to use them wisely and to build people up rather than bring them down. The scripture he led me to was this: “Do not let any unwholesome talk come out of your mouths, but only what is helpful for building others up according to their needs, that it may benefit those who listen” (Ephesians 4:29).

Imagine someone who knows nothing of the Christian faith coming across this tweet and it being their first impression of a Christian.

Many of us Christians will focus on the first part as it pertains to foul language or blasphemy. But what about the second part? If we ran Brian’s words through the filter of this passage, I think we’d find it wanting. We live in a world and (western) culture where posting images of ourselves has become incredibly normal. We post first thing in the morning and last thing at night before we go to bed and as the call for ‘authenticity’ becomes stronger, showing ourselves ‘just as we are’ has become de rigueur.

I’m not going to pretend I know what God would think about the way we present ourselves on social media with regards to clothing (or lack thereof) but I do know what God says about how we speak to one another. Proverbs 12:18 reads, “The words of the reckless pierce like swords, but the tongue of the wise brings healing” and in Proverbs 6:24: “Gracious words are a honeycomb, sweet to the soul and healing to the bones.”

These are passages from a book teaching us about wisdom and I would argue that Brian Suavé’s tweet is sorely lacking in that area. Conviction is the Holy Spirit’s job, it is far from ours to point fingers and judge. And if Brian is trying to win souls for Christ with his platform I would suggest he remembers this.