“When this is over, I’m going to dance” 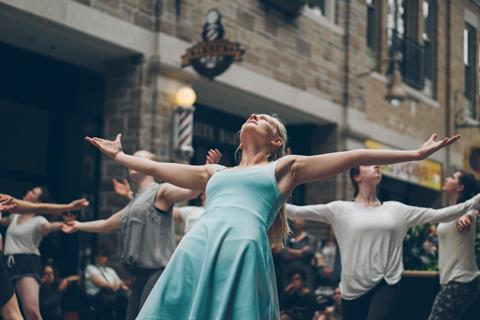 Relief. I felt a lot of emotions when the Prime Minister Boris Johnson announced the nationwide lockdown on 23 March – uncertainty about the future, fear of the unknown – but relief was the strongest.

The truth is, although I had worked from home the Friday before and had a quiet weekend, I had woken up on Monday morning weighed down with the mental and physical fatigue that I experience as a result of Ankylosing Spondylitis (AS).

It’s a form of arthritis in the spine which, left untreated, causes parts of it to fuse and had gone misdiagnosed for over a decade after I sustained a running injury in my twenties. By the time I was properly diagnosed by a rheumatologist, part of my lower back had already fused and it hurt to stand upright, so I walked with a hunch.

I began to keep a diary of “flares” – cycles of searing pain which could last days or weeks, followed by stiffness and a gradual loosening up of my limbs. Sometimes it hurt so much that I felt like new pathways were bearing seared into my brain. I learned to breathe and pray through flares, comforted by the fact that while I couldn’t explain to anyone else how it felt like I was living in a parallel universe, God knew. He was there.

Treatment that suppressed my immune system helps immensely, but leaves me more vulnerable to diseases like chickenpox, which I’ve never had. And, of course, to COVID-19. I thought lockdown would help me save energy and maybe make some progress on my posture exercises.

I had not reckoned for the healing that God was going to work in my life. This is not a story about waking up one day cured of AS, but about how in the quiet of lockdown, with all the other activities stripped away, God has shown me that I had to heal from much more. My years in pain hadn’t just made me physically hunch up; I’d shrunk my life. I held family and friends at a distance and avoided scenarios where I might have to dance. Public speaking, which I love, became something I did less and less until I stopped completely last year.

At Easter, God drew my attention to the wonder of Jesus’ resurrection body, with its scars that no longer hurt, but were still there. I felt encouraged that the body matters, it’s not just a shell.  There is also the hope of restoration, not just from illness but into the glory of the abundant life that God has in store for us all.

This period feels like a slow sunrise. I’m praying and doing the exercises that help me to rebuild muscle strength. I’m calling my loved ones and sleeping through the night for the first time in years. I’m standing a little straighter every day as long dormant muscles wake up and that crushing weight is gone.

I’m writing this while still on the journey of healing, but I know that the Lord, who has begun this work in me, will not stop until it is completed. Lockdown on the other hand, is only temporary. And I know what I’m going to do when it’s over: I’m going to dance.