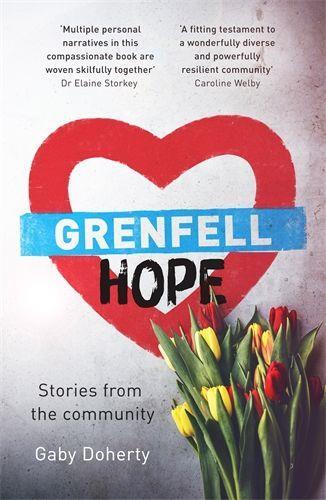 Seeing the flames shoot up the building made me shudder for those still inside. Imagine, however, if your bedroom window gave you an unbidden front-seat to this horror, as it did for Gaby Doherty. She was wakened in the middle of the night by her husband, who told her that the tower was on fire and that he was going to see if he could provide any help and comfort there. He was the first clergyperson on the scene.

Gaby shares not only her family’s account of loss and heartbreak in the wake of the fire, but also gives voice to a community that is often overlooked or misrepresented by the media. For North Kensington in London is vastly different from other areas of Kensington, with their swish cars, high-end patisseries and luxury homes. North Kensington, in contrast, can be overlooked with its social housing and residents with less buying power than their neighbours.

But North Ken is where Gaby and her family have made their home, where they seek to share the light of Christ with their community.

Grenfell Hope tells the stories of those who are often overlooked in society – stories of hope and transformation as ordinary people unite in extraordinary ways. She reveals how God shows his presence in times of great pain. She shares how the worst thing she’s ever seen has also brought out the best in people, as they’ve wept with those who weep and bear each other’s burdens in Christ. She’s experienced God’s presence in the pain.

Most heartbreaking to read were her descriptions of telling her three-year-old-daughter that her playmate and friend didn’t make it out of the tower. Grief in one so young comes out through the normal chatter of the day – which I imagine would be hard but healthy for the adults engaging with her.

One idea that has stuck with me since reading the book is that of our call to be hope bearers. These are people who, as Gaby says, stand in the doorway, holding the door open for hope to enter in. Through their words and their actions, they share hope with those in need. I’m convinced that no matter what our situation is, we all can be hope bearers for others.