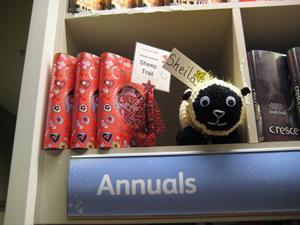 Bring the real message of Christmas to your community

I don’t particularly enjoy shopping, but as Christmas approached and my present list stared me in the face, I trudged off to Liverpool ONE shopping centre – 160 shops, more than 20 bars and restaurants, a huge cinema and a park packed with Christmas attractions.

As I shuffled round the shops, I saw robins, snowmen, Christmas puddings, Father Christmases, snowflakes and reindeer. They were hanging, standing, lit up, wrapped in tinsel, large and small, but surely we were missing something. Where was Jesus? Why were we even shopping for presents? What is Christmas really all about? Was Liverpool city centre drifting down the Winterfest route? I was determined to bring Jesus back to the city centre for next Christmas and I had an idea.

In Liverpool we love trails. The Council had recently held a very successful Superlambananas Trail, where families hunted for 125 sculptures around Merseyside. This was followed by a penguin trail, which was copied in other towns and cities around the country. Using animals on these trails seemed to have captured the imagination of all ages. Could this be scaled down to something that would invite families to explore city centre shops whilst Christmas shopping and which animal would link with the nativity?

With knitting back on trend, I decided to seek out groups who could make some woolly animals and my daughter, who is a keen knitter, suggested that sheep would be the easiest animal to knit.

I love working with different organisations and invited a key person from the Liverpool Mothers’ Union, a city centre Pioneer minister, the Diocese of Liverpool churches and various knitter-natter groups to join the project. We then started negotiations with Liverpool ONE, the city’s premier shopping centre. The management team loved the idea of shoppers hunting the sheep hiding in the department stores, recognising the trail’s potential to increase the numbers of visitors to the centre.

Soon, 12 large, knitted sheep were placed in 12 stores, including Gap, John Lewis and Waterstones and from the start they caused quite a stir. Staff named them in various ways, including after their store founder or by holding in-store competitions. Some sheep ‘wandered’ around the store all through Advent. Families collected all the sheep names, wrote them on the sheet alongside the Nativity story, and stores offered vouchers for a Prize Draw.

God blessed the project in unexpected ways with prayer support and resources. It was when I returned in the New Year to collect the larger knitted sheep from the stores that I realised how a humble sheep can capture people’s imagination in a big way. Shop staff used health and safety excuses to stop me removing their sheep from the store. Staff cried and waved to their sheep as I left one store. I was asked for a similar Easter trail. Could the sheep have their own website?

Who could have imagined that the anger I had experienced the previous year could turn into such joy as I realised that Jesus was baaack in town?

Could you do it?
If you’ve been inspired by this story, why not organise something similar in your own area? Jane’s book Messy Nativity (BRF ISBN 978 0 85746 055 4 £4.99) explains how the project began and gives a step by step guide to how other churches can organise their own Messy Nativity Advent Project, as well as the all-important knitting patterns. There are also additional ideas on engaging the community around your local church with the passing from home to home of a nativity set and how to arrange a street nativity party.

Jane Leadbetter is a Messy Church team leader and was the Diocese of Liverpool Children’s Work Advisor ?for 12 years.