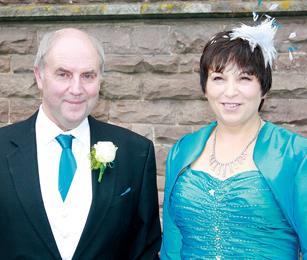 When Lyn Alderson wrote out her vision and hopes for the future, she little knew that God was going to take some words literally ...

A miracle happened back in 2006 and it has changed my life forever. It all started at my friend Anna’s house on 20 May.

Anna and I were running our own small businesses at the time – me as a freelance journalist and copywriter, and Anna in sales and marketing. We had got together for a chat and a prayer. I was at a difficult season of my life, getting back on track after a divorce, and both Anna and I were working hard to build up our businesses.

Anna had heard somewhere that writing a vision was good practice for business owners who wanted to move forward and succeed, and she wanted us to pray and write down our individual visions for the future. So we asked God to guide us, and set about writing down our thoughts.

“Write your vision down for five years’ time – that’s 2011,” instructed Anna, “but write it in the present tense, as if it’s already happened.”

OK, I thought. That’s no problem; I’m a professional writer with a good imagination. I can do that.

I just had one question. “Can I write it as if I’ve found a husband?”

“Yes, if that’s what you think you want.”

So this is what I wrote:

I am sitting in the garden of my country home, having lunch with my husband. I am really enjoying my food and my husband’s attentiveness. He is a kind and gentle man, who makes me feel valued. My husband is warm and good fun to be with. He makes me laugh and enjoy life to the full. He is reliable and has been successful in his field …

I am not sure why I envisioned myself in a country house, because I had always lived in the town. But that was definitely what I imagined in my mind’s eye. (There were other details in my vision pertaining to my business, but I won’t discuss that here).

Anna and I prayed together and asked God if he would help us to make our dreams a reality, but only if it was his will to do so. We didn’t want to create a future outside of God’s will. After that I went home. I didn’t think about the vision a great deal. I just got on with my everyday life.

Six months later, I decided I would be brave and join a dating agency. After becoming a member, I had three dates within a few weeks, but they were all disastrous! One man was much too old for me, another one was obsessed with collecting butterflies (which did not appeal to me), and a third seemed distinctly dodgy.

I was thinking of giving up because I found the whole process of meeting up with strangers excruciatingly painful. But I had been sent a list of potential partners and there was just one that stood out from the crowd.

The short description said that Pete was a farmer and his personality was gentle and affectionate. Something drew me to his profile, and when he phoned, he sounded very genuine and likeable. So I decided to meet him. I promised myself that if this date wasn’t successful, I wouldn’t put myself through the agony again.

Our first date was just for a chat in a country pub. We talked so much we were amazed that three and a half hours had gone by in a flash. I told Pete I was a Christian and he was really pleased about that because he was one too. He told me he was a widower and we discussed our families and many of the things that had happened in our lives.

Pete told me later that he didn’t sleep a single wink that night – and I slept quite lightly. We were both excited and already knew something really big was happening between us.

Our next meeting took place close to Christmas and the third date was on New Year’s Eve. Pete had promised to take me somewhere special. He took me to a lovely country hotel for a four-course dinner and live music. When he reached across the table and held my hand, I felt something quite unique relayed in his touch. I felt completely safe with him.

It wasn’t long before Pete invited me to his farm and I was thrown headlong into a lifestyle and culture very different to my own. When I walked into Pete’s cattle shed and saw rows and rows of curious bovine eyes gazing at me, I felt as if I had landed on another planet!

The animals looked very big indeed, especially the stock bull, a mountainous pedigree Charolais who had a dominant attitude. He seemed to be warning everyone: “Don’t mess with me!” Even the sheep looked enormous! Pete kept Suffolks, one of the largest breeds of sheep you can get. (A large ewe can weigh 15 stone.) He told me that sometimes the sheep would knock him over while he was feeding them, and walk all over him. It was like being trampled by a team of rugby players with hard boots on.

I remember thinking: “Help! I’m going to have to face those cattle and sheep one of these days. I hope they don’t walk all over me too and I’m going to have to do a lot of cooking if I become a farmer’s wife … I wonder if I can live with that? I’d much rather be reading a book than slaving away over an Aga!” But I already knew that Pete was worth making a few sacrifices for. I knew I had to try hard to adapt to a new way of life.

A few months after we met it was the lambing season. Pete had warned me that it would be manic and he would be sleeping in a chair by the Aga rather than going to bed for a proper night’s sleep. This would be the situation for five or six weeks and he would be pushing his body to the limit.

I was planning to roll up my sleeves and help to bottle feed the lambs, but as soon as lambing started, disaster struck! I bent down to catch a frisky little lamb and felt something move painfully in my lower back. Within a couple of days it had developed into a full-blown slipped disc and I was laid out on the floor of my house in Kidderminster in total agony.

So instead of me helping Pete deliver hundreds of lambs, I was dosed up to the eyeballs with hospital-strength painkillers, enduring one of the worst trials of my life. Eventually, I recovered from my slipped disc but had to wait a whole year to try once more to get to grips with lambing. During this time I started helping with some of the easier farm jobs in my spare time.

I think we both knew from the beginning that I would never become a farmer and would always be primarily a writer. But I needed to learn a few basics and get used to farming culture if we were to have a future together.

So I learned to face 100 hungry Suffolk ewes and fight them off with a sheep crook so that Pete could walk behind me, sprinkling corn into the troughs without being knocked off his feet. I also travelled round the farm with Pete in his truck or on a quad bike, checking for livestock casualties or problems with the electric fencing.

I learned to weigh lambs and record the weights in a book, and I even went into the same pen as the breeding bull on one occasion and helped Pete deliver a calf! I was only passing him the calving instruments, but it was terrifying to be shut inside a pen with an enormous bull. Believe me, they look so much bigger when you are standing right next to them.

When Pete was working outside and had contractors helping him, I would be busy in the kitchen providing refreshments, or he might ask me to collect veterinary medicines or feedstuffs from a local supplier. Occasionally, animals escaped from the fields and had to be rounded up before they caused damage to neighbouring properties or put themselves in danger. There is always something that needs doing on a farm.

There were many occasions when I felt tired, grumpy and overwhelmed because everything was physically hard, and there wasn’t much respite. It quickly sank in that farming was a 24/7 job, and leisure time was like gold dust.

There were certainly times when I questioned my sanity. I was a middle-aged woman in culture shock! This was a lifestyle I had never expected or sought, but I knew I loved Pete all along and the feeling was mutual. I also knew God had placed us together.

Fast forward a few years. Although there had been occasions when we didn’t see eye to eye because of cultural differences, we never doubted our love. The challenge we faced was how to be a couple despite our different backgrounds. We both had to compromise. Pete had to learn to stop work and take Sunday afternoons and evenings off, and allow us to enjoy quality time together. Winter became a special time because there was less work to do. We could light the log burner and spend cosy evenings together.

We finally made our wedding vows on 5 October 2013. It was a very happy day for both of us.

I’ve looked back at the vision I wrote down in 2006 on many occasions and it amazes me how I was inspired to ask for exactly what God wanted to give me – a country-dwelling husband who had been successful in his field. (I should have said fields, plural!) God must have had a chuckle when I wrote that down.

But I asked for someone warm, gentle, good-humoured and reliable – and that’s what I got. A loving and kind man with a great sense of humour.

I sometimes think of Jesus’s words: “Therefore I tell you, whatever you ask for in prayer, believe that you have received it, and it will be yours” (Mark 11: 24). How true this is, and how amazing that God gives us all we need, even the faith to ask him for a miracle.

+ You can follow Lyn’s farmhouse blog about the joys of being a town-bred farmer’s wife at www.lacopywriting.co.uk