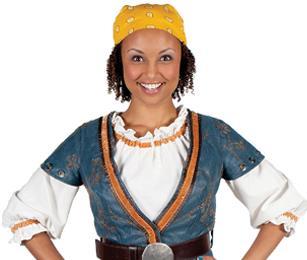 A ray of light

The irrepressible Gem from CBeebies pirate adventure show Swashbuckle, Gemma Hunt talks to Hannah Hiles about her calling to work in the media and being a role model

Gemma Hunt is a busy woman. As we speak, she has just finished touring the UK’s arenas with a host of CBeebies favourites and is enjoying a few weeks off before she starts filming the third series of Swashbuckle.

She turned 33 on April Fool’s Day and describes this as her “Jesus year”. “It was a hugely significant year for Jesus’ ministry, so I’m hoping for big things this year too!” she says.

And she’s keeping tight-lipped about a top secret, high profile role which has yet to be announced, but which she describes as “something you will definitely hear about”.

While you might not be familiar with Gemma if you haven’t been around young children over the past 12 years, she’s now one of the big stars of the BBC’s pre-school channel CBeebies, having cut her teeth on the primary school equivalent CBBC.
She’s enjoyed entertaining people from an early age, but when she was 16 she had an experience at the Soul Survivor festival that confirmed the direction she was meant to take.

“Someone said they had a prophetic word for me,” says Gemma, who lives in Kent with husband Phil, “that I would be salt and light in the dark place of the media. I really felt it was what I was meant to do. I was so excited at 16 to receive that message. It gave me something to hold on to and helped shape my choices.”

There were only two universities in the country offering the course she wanted, and while her heart was initially set on Salford, as it was the home of the World Wide Message Tribe, she went to Luton to study Media Performance at what is now the University of Bedfordshire.

“I definitely see God’s sense of humour in this as I now film Swashbuckle in Salford, even though I didn’t get offered a place at the university,” she laughs.

Following a month of mission work in Brazil after her A Levels, Gemma threw herself into university life, hosting a show on student radio station Luton FM and becoming president of the campus Christian Union.

Towards the end of her final year, she found herself at a crossroads. “I remember thinking, 'OK God, I have done this degree,” she says. “Do you want me to stay here at the university or should I go home and invest in the relationship I was in at the time?' And then the CBBC job came up.”

Gemma met a representative from Take 3 Management at the university, sent them her showreel and was signed up. She was offered a job on CBBC before she had finished her degree, which she passed with first class honours.

“They let me finish my course and I started work on Independence Day 2003,” she remembers. “My career has been so blessed.”

Children’s television proved a natural fit – with a sister nine years younger, Gemma had grown up watching a lot of it – and she went on to appear on numerous CBBC shows, including Smile, Xchange, Chucklevision, Best of Friends, Bamzooki and All Over The Place.

She is a regular fixture on stage at Christian festivals like Soul Survivor, Spring Harvest and New Wine, and has also worked with Scripture Union on projects for young people.

Gemma grew up attending Bethesda Baptist Church in Trowbridge, Wiltshire, with her mother, after her parents separated when she was very young. She gave her life to Christ when she was 11 years old at a church camp, and says her faith has “gone from strength to strength” since then.

She now attends an apostolic church in Dover, which she describes as “a Holy Spirit-led church with lots of outreach work. It’s a really good community church where everyone mucks in”.

“It was a bit of a novelty for them at first that I was on television, but then they realised how I could serve in the church. For example, I’ve interviewed our pastor to help him share his vision for the church, and I volunteer at the mum and toddler groups.”

Her distinctive Swashbuckle costume, which she wears to play plucky pirate Gem, helps preserve her anonymity in real life.

“I don’t get recognised at much as I used to when I was on CBBC,” she says. “I even visited the science museum in Liverpool during half term and didn’t get recognised once. When people do recognise me, the kids tend to go shy and the parents can get a bit weird, but I normally get positive responses – and not many people do the Swashbuckle cheer!”

Dressed as Gem, however, she is one of the most recognisable faces on CBeebies and she takes the responsibility of being a role model seriously.

“I get a lot of feedback from mixed race and black people,” says Gemma, whose mum is Jamaican and dad is white British. “For example, my friend’s niece was so excited to see another girl like her on television. As a kid I was oblivious to it, apart from having irritating hair, which I love now. I know my identity in Christ and I am very content with that.”

Being herself is key to Gemma’s appeal – and plays a large part in her life as a Christian in the media. I wondered if it is that “dark place” from that prophetic word 16 years ago?

“It can be quite corrupt, with lots of backstabbing and bitchiness,” she admits. “You are literally under the spotlight and people put a mask on for their job. Shining brightly in a wholesome way isn’t so common. I just wanted to be me, a bigger version of myself. I do find that people apologise if they blaspheme in front of me, and they’ll avoid discussing certain topics with me.

“Sometimes people want to get into big theological debates, but I don’t feel I need to convince them. I would like to influence people by just living out my life. Being someone who is different, you can stand out no matter where you are, in your office, at home or at school.”

Away from the cameras, Gemma is a real foodie and loves rustling up a big batch of fudge in her kitchen. She even has a business selling her fudge, even though these days it tends to be more a treat for family and friends rather than a commercial venture.

Jesus is at the centre of Gemma’s life and she believes he guides her every day.

“I don’t find it difficult to be a Christian in the media,” she says. “I don’t know how I would have got this far without God. My faith has been my spine, and has kept me upright. God is so good, so faithful, so loving, so kind. He never gives me anything I can’t handle. Whenever I feel tested, I remind myself that God knows I can do this.”

+ Hannah Hiles is a freelance journalist and writer, based in Staffordshire