Don't give up on church 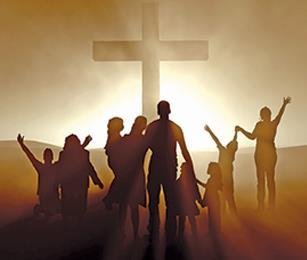 Whatever our experiences of church, it remains God’s chosen vessel on earth for furthering his kingdom, says Amy Boucher Pye

Yes, that’s a vicar’s wife, and yes, I say that in the 12-step fashion. Of course I love being a vicar’s wife, not least being married to my husband. But like many, I’ve been hurt at church, a place that is supposed to foster love, acceptance, community and care. The wounds we receive here seem to pierce deeply.

My prayer partner wielded the knife. Our church was in crisis and it was my husband (the vicar) who was the culprit in their eyes. He was accused of hurtful things, not least being “probably deluded” and “acting like the Nazi thought police”. During a heated three-hour annual meeting – on the day I heard my job with a major US publisher was eliminated – the church passed, in effect, a vote of no confidence in his ministry. Had we been in a Baptist church, we would have been out on the street, but due to the quirkiness of the Church of England the vote held no power to evict us.

When I heard that my confidante was the first to speak against my husband at a PCC meeting, and that she and her family were leaving the church, I felt like I had been punched in the stomach. The blow was emotional, but felt physical. Her betrayal ran deep.

Our church suffered through those months and more than 50% left. Those who remained were bruised and hurting. But through the years, the Lord has renewed and healed us. Our church has deepened its roots and become outward-looking; it’s a welcoming place that reaches out to newcomers. My husband weathered the storms, realising and admitting what he could have done better, while growing into a stronger leader. And though it took me nine years (really!) to forgive my former prayer partner, one day, I finally was free. I could bless her and wish her well.

God’s great idea
When the church is a place of pain for so many of us, how can we have confidence in it? In one sense I don’t think we can ever be confident in the church: it’s made up of fallen people and thus is a fallen organism. But it’s God’s chosen vessel not only to show the world his love, but also as a place for his people to give and receive love. Quite simply, we can’t give up on it.

And it is an extraordinary phenomenon, as John Stott points out in What Christ Thinks of the Church (Monarch, 2003): “Its tiny beginnings in Palestine developed over the centuries into a unique, multi-racial, multi-national, multi-cultural community.” As he says, only the Christian faith can be called universal, for Christ has followers from every race; other religions are called ethnic because they are largely limited to certain people groups.

Following from John Stott’s title, what does Christ think of the Church? In short, it is his. He founded it on a rock and promises that the gates of hell won’t prevail against it (Matthew 16:18). He is its head and source of life, and knows it intimately. If he loves the Church, shouldn’t we?

In Matthew 16, when Jesus speaks of the Church, he uses the Greek word ekklesia, which the New Testament employs in four ways. One is to signify the universal Church; another refers to a local community; another is the actual assembly of believers in a particular place; the last is a small house group. Whichever meaning is being used, the word always speaks of the coming together of people to meet with God and with each other.

His hands and feet
Stories abound of people experiencing negative things in church, but I’ve been heartened by some encouraging stories. Brendan from County Cork is a recovering alcoholic and now and again, he would go on a bender. The pub would call the local pastor and they’d come to clean him up and put him to bed. In return, each Saturday night, Brendan would don rubber gloves and clean out the public loos on the edge of the park where the church met. Both he and the church gave extravagantly to each other, and yet the story is poignant, for Brendan felt unable to join the community because of his failings.

The wife of a church leader tells how one Sunday, she was fighting a virus and should have been resting under the duvet instead of hosting a family from Nigeria and leading the music. When a woman at church asked if she could help her with anything, such as the ironing, my friend promptly burst into tears, thinking of her huge basket of wrinkled clothes. As she says, “It’s those everyday things that mean so much when people reach out to help.”

Indeed, when I surveyed people on a social-networking site, I received many stories of the practical help people received from others in their church community, whether lifts to hospital appointments or even to their husband’s funeral, help around the house, meals, child care, and most importantly, prayer and love. The same phrase echoed through their stories: “I don’t know what I would have done without my church family.”

“I have a dream”
Amazingly, the Church is God’s chosen vessel for furthering his message on earth. We are his representatives, and we’re to be known by our love. And though we fail, he’s a God who redeems us – and the Church.

My father had a dream that changed his life, and when I think of a redeemed church, I think of his dream and the vision that followed. Following the death of his father when he was just 11, he was a man consumed by fear and worry. He was afraid of people, afraid to spend money, scared to share with others and make friends, and terrified of public speaking or even singing in church. And he harboured a deep fear of death.

One morning, he woke up from a dream during which he sensed God was going to heal his biggest problem – his fear of people. And a couple of weeks later, during a communion service, he was set free. Having prayed to be filled with God’s presence, he had a half-second long vision:

“I saw Jesus like a huge light, and we all were like small lights around him – think of the sun, with us as stars. We were all the very best friends and knew everything about each other, even our faults. But Jesus was forgiving all those faults and our sins, and we were all so happy. We were saying to each other, ‘Isn’t he wonderful! Isn’t Jesus wonderful!’

“And even our sins and faults were being redeemed by the Lord, with beautiful shades of colour shining out of everyone. To get an idea of this communion of friends, think of your very best friend – perhaps someone you have known for many years. Think of having complete transparency with this person; you know their good and bad points but are totally accepting, and the reverse is true. Now imagine a third person, a fourth, and so on – all in this intense communion of mind and heart. Finally, imagine being in a crowd of hundreds of thousands, all who are being loved and redeemed. That’s what it was like.

“After that half-second vision, I was no longer afraid of people. I couldn’t be, because I could see how Jesus loves and forgives all of us.”

That vision – the mystical communion of the saints – is my dream for the church. A place where we know and are known. Love and are loved. Where we reach out to those like us, and not like us, spreading God’s message of redemption and grace. We might not have confidence in the church, but we can have confidence in God. He never changes; is always the same yesterday, today and forever.

After all, as GK Chesterton famously observed, “At least five times … the Faith [the Church] has to all appearance gone to the dogs. In each of these five cases it was the dog that died.”