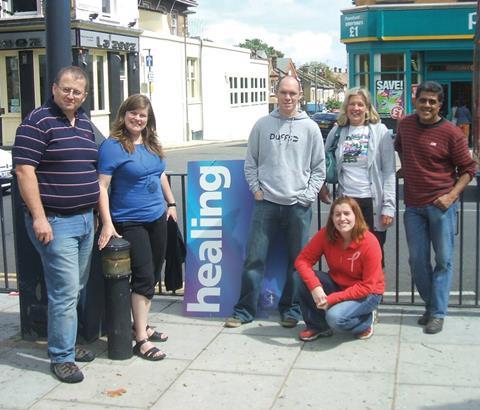 Take the Gospel to the streets

Could you offer a prayer ministry to your community? We hear from two women who have stepped out in faith and seen lives changed

Our prayer café is a wonderful adventure

Chris Ledger is a licensed lay minister at an Anglican town centre church in Reading. Encouraged by her vicar, she drew together a group of like-minded people to pray about developing healing services but, as they prayed, they felt drawn to reach out to the people of the town

It was just before Christmas 2005 that God spoke to the group through the story in Joshua 3, with the words,  “it’s time to get your feet wet” and the Prayer Café was born. It’s a large, busy, exciting, testing, wonderful adventure, involving over 300 people in our church.

Our church hall is open once a month on a Saturday for two hours, but the work begins the previous evening with a time of worship and listening to God.  We have seen pictures and words given to us become reality as people respond to, “God told us you were coming”. It’s pretty persuasive when you can describe their outfit, or even their symptoms!

Then, on Saturday morning, the team meets for prayer at 11 am for half an hour before we open to the public. Our church hall is set out like a coffee shop and people are welcome to come in for prayer, a chat, a listening ear, and free drinks and home made cakes.

On sunny days we have a gazebo outside on the church lawn, so that those who feel daunted about coming into a church building can receive prayer somewhere more comfortable for them. Some of our 50+ team are out on the street inviting people in; others are asking people if they have any need for prayer. If people are in too much of a hurry, then they will be prayed with on the street.

Other members of our team are involved in hospitality, worship, interceding, prayer walking and writing down the 100+ prayer requests we receive each month.  Ten stalwarts undertake to pray for the guest’s requests every month. Others ‘pray and bake.’  Each individual member of the team has at least two prayer partners covering them for the duration of the Prayer Cafe.

In 2007 we added Prayer Stop to our ministry. This is on a much smaller scale than Prayer Café and the team has included people from five different churches. It involves three teams of two people, who offer payer in the privacy of booths set up in the church hall.  They are supported by people interceding, whilst they pray and other team members out on the street inviting people in and explaining what is on offer.  The response within the two hours is amazing, with up to 50 people lovingly prayed with, either on the day or via their name and details being sent to our ongoing intercessors.

In general, these are not Christians, but ordinary folk bowed down by the cares of the world.  We hope that they find a little oasis where they can drink in the love that Jesus has for them, and leave feeling refreshed.

Prayer Stop is headed by my colleague Gill and her husband, and they have taken this out to the nearby villages. They had 40 people ask for prayer when they stood outside their village post office for two hours! Seventy five asked for prayer at a village Fair.  The needs are there in abundance, and we could all make such a difference.

Since we opened Prayer Café, the team have prayed for approximately 5,000 ‘not yet Christians’. They have seen people healed, answers to prayer for jobs and accommodation, and others turn or return to Christ. One guest with a non-church background came in very cynically and went out smiling, saying, “This is a gateway to heaven”. A 72-year-old man living in India, whose son requested prayer, was healed of a broken hip. This Hindu father went around saying, “The God of the people of Reading has healed me”.

All our team are well over 60 and we’d love to see every church in the country offer prayer to their neighbourhood. It’s never too late to serve our awesome God and it’s such a privilege to be allowed to offer a touch of God’s heart to people in need.

Saturday morning is a time of blessing

It’s nearly three years now since one of our church leaders suggested sending a team out every Saturday morning to pray for people on our high street. He had been inspired by a street ministry in Coleraine, Ireland and we followed their model. On the one hand, it was simple: we’d need a banner, some music, some chairs and some leaflets. On the other hand, it was scary. We’d be offering prayer to complete strangers outside of the security of our own church.

We spent several weeks praying about where to position ourselves and felt led to a traffic island, right in the middle of the high street, between the post office and Poundland! A banner was made, leaflets were printed and a rota of volunteers was drawn up to ensure that a team of people would always be there for two hours every Saturday morning.

I’d be lying if I didn’t say we were out of our comfort zone, but we knew in our hearts that we were doing what Jesus calls us to do. And to encourage us, one of the first comments we received from a passer-by was: “Well it’s exactly what Jesus would have been doing, isn’t it?”

There’s now quite a community and regulars are often waiting for us when we arrive. I have to be honest though and say it’s been a challenge. Whilst we all had experience of prayer ministry within the church, praying for complete strangers on a busy shopping street was a whole new ball game. However, if there’s one lesson we’ve learnt, it’s that when we step out in faith, God loves to come alongside us and provide us with the tools we need. And, as we seek to live out our faith, we receive his blessings.

One of those blessings has been getting to know and love the other members of the team. We meet up at the church to pray together before we head out and the time we’ve spent in prayer has created an intimacy that would usually take years to form.

Another blessing has been that it’s become more and more natural to pray for people, to talk about Jesus and to explain what our faith means to us. We’re now more ready to do that wherever we are and whatever the day of the week.

However, the greatest blessing by far has been witnessing how God can change lives. As the months have gone by, we’ve had more and more people coming back with wonderful testimonies of God’s healing power.

One man had diabetes which was out of control. We prayed for him several times and then he appeared one morning with an armful of fruit to say thank you. His diabetes had settled down and he attributed it to God’s healing power.

Then there was the woman who’d asked for prayer because she was pregnant with what she hoped would, at last, be her first child. Months later, she came back with her baby boy to say they had named him Raphael, which means ‘healing God’.

Another woman who was following a course of chemotherapy for bowel cancer came for prayer for several months. She not only ended up joining the church, but is now completely free of the cancer. Her consultant was astonished and told her to keep up whatever it was that she was doing. She told him it was prayer.

We’ve been fortunate enough to witness the healing of bad backs, shoulders, ankles and knees, and we’ve been privileged to walk alongside people as they go through periods of suffering.

Of course, the majority of people who pass by are too busy, too disinterested or too dismissive to stop; but we’ve come to learn that it’s not about numbers. It’s about encounters. When we connect with someone who’s looking for God or with someone who’s in real need, then it’s a privilege to be God’s hands and feet and to see how God meets with them.

Often the need is a practical one. Before our church went out on to the high street, we were unaware of just how large the homeless community was that lives on our doorstep. As the months have gone by, we’ve befriended drug addicts and alcoholics, who come to look us up on a Saturday. Sometimes they just want food, sometimes they want prayer and sometimes they need help with housing issues.

It’s not unusual now for alcoholics to drop in on our evening service. They come for the coffee and the biscuits, and what they describe as “the incredibly good feeling” they get when they come into the church. Yes, they can be disruptive, but surely this is what Jesus would want?

We’ve seen the wonder of one alcoholic giving his life to Jesus, drying out, taking up his old job as a carpenter and eventually being re-housed. He calls God his 24/7 AA counsellor and is constantly giving God the glory. We rejoice with him, but we know that it’s not the same success story for everyone. We see people trapped in their addictions and we’ve seen one man come to know Jesus and then die; but we’ve also seen healings and we’ve seen people getting to know Jesus for the first time.

If we stayed in bed every Saturday morning, think what we’d be missing!