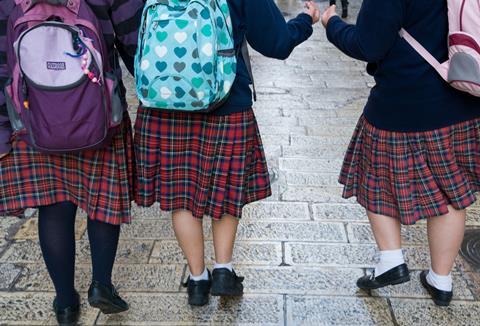 On Monday 6 September, Panorama aired a programme called ‘Who’s protecting our kids?’, which revealed that the number of reports of children sexually abusing other children doubled in the two years to 2019. Combined with a recent Ofsted report, which highlighted a rape culture in secondary schools, it can feel pretty terrifying to wave children off at the start of a new term. It’s especially frightening if you have daughters, as girls are disproportionately affected.

The tip of the iceberg

Dr Rebekah Eglinton, chief psychologist for the Independent Inquiry into Child Sexual Abuse, said unwanted touching and being pressured into sharing nude photos had become a part of everyday life for children “to the point where they wouldn’t bother reporting it”. It is tolerated and minimised because our culture says it’s how things are, and you shouldn’t make a fuss.

As horrified by the reports as I am, I’m not shocked. I am the mother of five girls, the youngest of whom has just finished sixth form. I used to be a secondary teacher and a youth worker, and I worked with a local rape crisis centre delivering workshops across the county and supporting teenage survivors of sexual abuse. I actually think these figures represent the tip of the iceberg.

I also used to sit on my local Police Rape Prevention Steering Group and every year we found that the age group most likely to be sexually assaulted or raped was 16 to 18. House parties were one of the big culprits…and the worst week for cases? Prom week. It’s heartbreaking.

This made me a mum who knew too much. And it made me a mum who made time for awkward conversations about staying safe, knowing your worth and sticking up for yourself. It meant I was determined to hold my cool so they knew they could always tell me if something was wrong.

Still I worried, and I was right to. There was a real risk, but I couldn’t lock them up in a tower until Prince Charming came along. I needed to teach them to look after themselves and out for each other.

Something needs to be done

Police figures show that reports of abuse rose from 7,866 in 2016-17 to 16,102 in 2018-19. I don’t think that means the amount of abuse doubled. It means our young people, our daughters, are beginning to believe they can speak up. It means schools and the police are taking it seriously.

As parents, it’s easy to negate the ability we have to shape and support our children, but it’s us they spend most time with. We can equip our daughters with tools that will help them to stay safe and raise our boys to be part of the solution rather than part of the problem.

I’ve taken some of what I’ve learned working with young people over the last 20 years and created a workshop for parents called Reclaiming Our Families. It looks at how we can have awkward conversations and encourage healthy boundaries and values even when our children are tiny. If we can instill those values while they are young, they’ll apply them in every arena of their lives. Find out more here.