WW1 film Road Dance is a far cry from the sweet period drama writer Suzie Kennedy was expecting. Instead it told the powerful story of a woman terrified of judgement in the face of unspeakable trauma.

Set in the Outer Hebrides just before WW1, Road Dance begins with beautiful landscape views of the roaring seas and green lushness of the fields. I was ready to watch a quaint film, set in times gone by. I was convinced it wouldn’t have any relevance to me sitting in a cinema in 2022. How wrong I was. 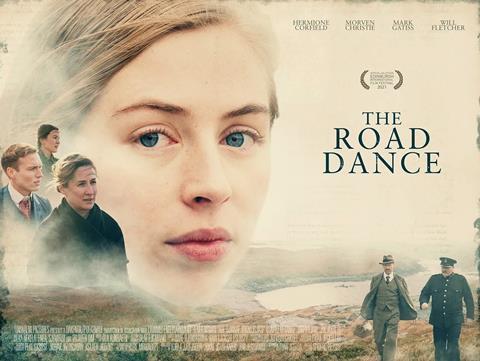 Have you heard of the expression: “Times change, people don’t”? The young girls in the film have their crushes on the local boys and visa versa. As they come out of the church service lead character Kirsty is giggling to a boy about her sister: “Annie fancies you angus”. This could be any town in 2022.

The film follows teenager Kirtsy, played by Hermione Corfeild and her first love Murdo, played by Will Fletcher. He is a book worm and shares literature with her. It’s the young romance we all dream of and want to see succeed. Then their romantic bubble is destroyed by the news that all the young men from the island are to be sent off to war. Watching this I could feel this sad reality of today’s world and the war in Ukraine and seeing young families broken up as the men stay behind to fight.

The last night is spent at the Road Dance and we see Kirsty, wearing her mother’s courting dress with Murdo dressed smartly in his suit to head out with the rest of the community to enjoy one last night of fun and normality before they leave for war. She looks beautiful and all is going well until a fight breaks out between Murdo and a jealous admirer of Kirsty’s. The evening goes from bad to worse as Kirsty is attacked and raped by an anonymous man who appears from the bushes as she walks alone to the bathroom.

We hear of women hiding their abuse, having to hide pregnancies and even abandon babies through the fear of being outcast.

The following moving and heart-breaking hour and a half follows the bruised and shame-filled main character as she tries to come to terms with the horrific events and their consequences while desperately trying to hide her trauma from those around her. In one scene the audience watches on as she vulnerably searches her body for signs of the attack and checks her bloodied underwear. It is terrifyingly real for anyone who has suffered the violation of rape.

We can feel her fear as she attempts to face the trauma completely alone, surrounded by a community that she knows will shame and judge her for something completely out of her control. As I watched I was moved to think how many women we read about in today’s world who are still subjected to this stigma even as victms. We hear of women hiding their abuse, having to hide pregnancies and even abandon babies through the fear of being outcast.

Just as Kirsty held on tight to her father’s crucifix while she witnessed war, rape and many other atrocities, we can hold on tight to our father who never leaves us.

The tragedies come thick and fast for our desperate protagnist but there are poignant moments of kindness littered through the depressing film. I don’t want to ruin the ending, but I felt Jesus at the heart of the storyline as Kirsty constantly referred back to crucifix she was gifted by her father. I was reminded of Deutromomy 30:3: “God will restore everything you lost.” Despite it being set during WW1, it could very much be the present day. We still live in a world of war, judgement, rape, and where women feel shame and the burden of carrying that shame for things that happen to them. The film reminds us that Jesus is always with us even at the most desperate of times. Just as Kirsty held on tight to her father’s crucifix while she witnessed war, rape and many other atrocities, we can hold on tight to our Father who never leaves us.