When Theresa Grant had the idea to put the real meaning of the rainbow on a t-shirt, she never realised that it would affect her own faith, and be a tool to tell many about the love of God. 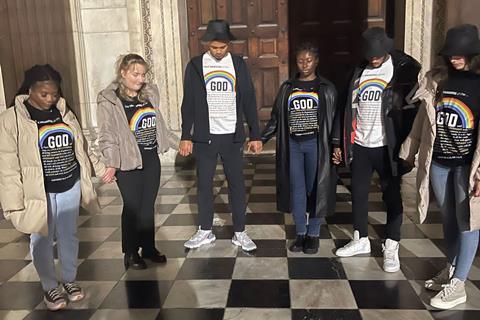 The Lord created the majestic rainbow we see in the sky but I have discovered that only a minority of people know the true origin of the rainbow. About five years ago I had a vision of a T-shirt saying “The real meaning of the rainbow”. It was just a ‘thought’ in my mind. It was never my plan to create T-shirts, but the thought would come back from time to time.

I had just said the word “contrary“, and there was the word again in scripture! I was in a backslidden state at the time. I knew I hadn’t given my all to Jesus, and my social media posts reflected that. I had one foot in the world and another foot out. I felt the scripture was a confirmation from God leading me to the assignment to create the T-shirts. Whether I was perfect or not, I knew the task had to be done, so I began. At the same time, I began to commit myself fully to Jesus.

I felt the scripture was a confirmation from God leading me to the assignment to create the T-shirts. Whether I was perfect or not, I knew the task had to be done, so I began.

The Lord impressed on my heart to release the T-shirts after I had finally made them in August 2021. I had been delaying the release as the thought of promoting was daunting for me, and fear kept creeping in. However, the Lord kept sending encouragers and messages, so I just had to trust him, and “go”.

I got the T-shirts designed and printed, and now I go out on the streets of London and share the biblical meaning of the rainbow along with the gospel. The first person I ever spoke to was from Israel. All fear left as I began speak about the real meaning of the rainbow, it was as if I had a fresh fire and joy in my heart. I find the T-shirts are a great evangelism tool, whenever I’m out wearing the T-shirt people stare at the writing when I’m wearing it.

The rainbow signifies God’s promise to creation. It arrived after God flooded the earth and everything was destroyed due to mankind’s rebellion on the earth.

As believers in Christ in these times we cannot dismiss the fact that the rainbow was created for a purpose and with a message. The rainbow signifies God’s promise to creation. It arrived after God flooded the earth and everything was destroyed due to mankind’s rebellion on the earth. Thankfully the Lord kept Noah and his family.

The fact that a lot of people do not know the true meaning of the rainbow is so sad. We may never be flooded again, but judgement will come. The rainbow is a promise but also a reminder that the Lord is a God of justice. Let’s reclaim the rainbow to the King of kings with love and point the hearts of the people to the Lord today!

To find out more about the t-shirts, go to: https://instagram.com/disciplearmour?utm_medium=copy_link