Many female clergy donned the popular BELIEVE jumper from Marks and Spencer this Christmas, Revd Lucy Brierley explains why

‘If you take “Christ” out of “Christmas” you’re left with just “M&S”!’ jokes Revd Lucy Brierley, as she explains why a bright Marks’ jumper became the unofficial clergy uniform this festive season. 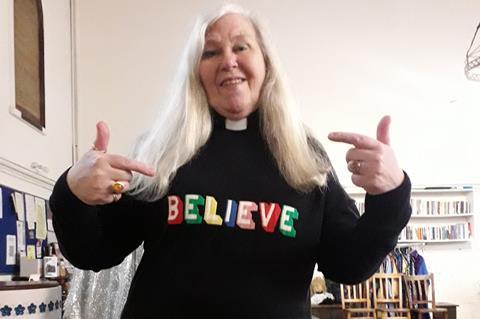 M&S unwittingly supplied the most popular clergy Christmas jumper this year. Emblazoned in colourful letters with the word BELIEVE, women priests, ministers and pastors up and down the land have been seen wearing it. There have been all sorts of jokes going around, because M&S’s equivalent jumper for men features the words ‘Ding Dong’! There was a suggestion that it might catch on with bell-ringers…

I decided to join the ranks of female clergy sporting the jumper and wore it at my church’s recent carol service. And I’m thrilled to be able to wear a Christmas jumper to declare that I believe. Why? Because this good news isn’t something I want to keep to myself.

Revd Cindy Kent agreed. She said: ‘What’s not to like about a great word like “BELIEVE” in a sort of 3D with lots of lovely colours on black? I love the fact that it’s not preachy. For fellow believers there will be an obvious, “Yay, I believe as well.” I’ve had a few thumbs ups from people so far.

‘For non-believers it might just give a pause – “Believe what or who?” – and that might start an interesting few thoughts, which will hopefully be enhanced by Christmas broadcasting of the timeless gospel message. I shall be wearing mine at Midnight Mass…with several thermals underneath, of course!’

Isn’t there more to Christmas?

There are plenty of people who enjoy Christmas without really engaging with the Christmas story, and I don’t blame anyone for getting stuck into the festive period even if they don’t believe in Jesus. A lot of people just want to feel their spirits lifted by the lights, fun and food in the midst of difficult times. However, once the festivities are over, the presents are unwrapped, the turkey is eaten and the Christmas tree is starting to droop, some will ask themselves: what was that all about?

I’m thrilled to be able to wear a Christmas jumper to declare that I believe.

If there is no Christ at the centre of Christmas, it’s a bit like rushing downstairs to open a present from under the tree, then – after tearing off the wrapping paper, opening the box and taking out the packaging – finding there’s actually nothing inside. M&S may make wonderful jumpers, but as J. John said on Twitter: ‘If you take “Christ” out of “Christmas” you’re left with just “M&S”!’

I really do believe

But the belief goes in both directions. Because God also believes in us. He believes we are so valuable that he came to do all of that for you and me. And that’s something that’s really worth believing in.