It's terrifying in Ukraine, but God is giving daily miracles that lift people's spirits

In December 2021, Sharyn Borodina felt God speak to her about his victory, here she shares what God is doing in Ukraine, in the midst of the Russian invasion. 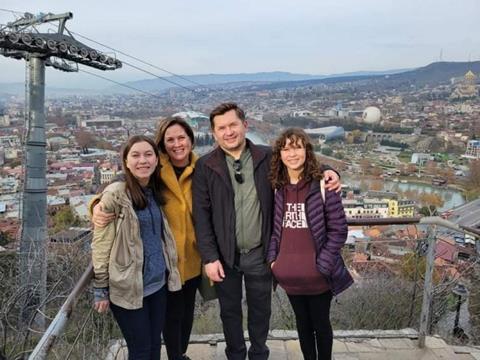 Sharyn Borodino is pictured here with her family

Back in December we were having a prayer time in Ternopil, Ukraine, with our Youth with a Mission (YWAM) leadership team. We were asking God to give us his heart for the upcoming year. In a time of worship, this verse came to my mind: “The battle belongs to the Lord.” (2 Chronicles 20:15) I thought it might be in reference to some difficulties we were walking through as a base, but I really felt an unease in my spirit, that no, this was going to be a headline, in a much bigger way in 2022.

I brushed it off, because I didn’t want to think about something happening that would be such a battle. When the war broke out just over a week ago, the Lord brought the verse back to me again and again. It has been a comfort to me, because the Lord told me there was going to be a battle months ago. He let me know that he is fighting that battle. There is so much hope in that for me. I know that God is going before us. I know there will be a victory, but I don’t know what the cost of that victory will be.

My husband, Ruslan’s father is Russian and his mother is Ukrainian. His last name is very Russian, but he is a Ukrainian patriot through and through. That is the story of most of Ukraine. Everyone has some sort of mixture of Ukrainian and Russian background. Half the country speaks fluent Ukrainian, the other half speaks Russian. In 2014 when Putin’s government invaded Crimea, that was an incredibly divisive moment, it meant that Russia was at war with Ukraine. We have lived in that tension for the last eight years.

I love the Russian people. I speak Russian in a part of Ukraine that is very much Ukrainian speaking. They are very patriotic about being Ukrainian speaking but they have treated me, even as a Russian speaker, very well. The war has attacked the beauty of that. It feels very much like a divorce, like a Romeo and Juliet kind of a story. It is heart breaking.

We have heard of bombs dropping out of the sky and not exploding, stories of tanks running out of fuel that had fuel.

But there have been some stories that have encouraged us. We have heard of bombs dropping out of the sky and not exploding, stories of tanks running out of fuel that had fuel. Stories of Russian soldiers who have given themselves up as POWs because they refuse to take up arms against part of their own Slavic families.

For the last three days there has been a storm raging on the Black Sea. It has been so ferocious that Russia’s naval ships have not been able to dock at port. Also just yesterday, my husband Ruslan got a phone call from a maternity ward in a small town just outside of Kyiv that had been destroyed from the bombing. The maternity ward was in desperate need of all supplies and gave him a list. He took the list, walked out the door of our building, and all of a sudden a truck pulled up outside. Out jumped a group of Norwegians who had come over from a YWAM base in Romania. The van was full of humanitarian aid, including every item that was on the list from the maternity ward. Ruslan was able direct the supplies to exactly where they were needed.

They are talking about how eight kilos of macaroni is feeding 150 people – food is being multiplied.

These stories are what has been lifting our spirits. It is the support and prayers of the body of Christ around the world that are making the difference. This is a “such a time as this” (Esther 4:14) moment for the Russian and Ukrainian people, but really for the world.

Sharyn BorodinaSharyn and her husband, Ruslan have been leaders in YWAM Ukraine for the last 25 years. They have two daughters, Gloria, 16 and Emily, 14. YWAM Ternopil is currently the city headquarters for relief efforts for incoming refugees. You can find out more on their Instagram @ywamternopil