I’m a radio journalist and news like George Floyd’s murder is painful, but I remember that God is bigger than the chaos

As a journalist, Tola Mbakwe knows what it’s like to feel the second-hand trauma of horrific events on the news. On the second anniversary of George Floyd’s murder, she explains the effect the news can have on her mental health and how she leans on God to help her see the beauty in the world. 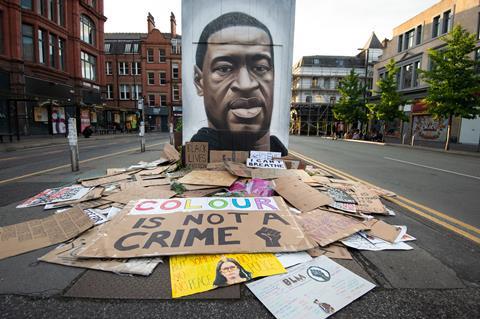 In my early years, I remember viewing news as boring. Every evening my family and would sit on the couch, and my mum or dad would ask for the remote, because it was time to watch the news. Each time I would roll my eyes (without them seeing of course) or quietly sigh. “But it’s boring,” I would say. And each time one of my parents would say: “But it’s important to know what’s going on in the world.”

Eventually I got it and I realised that writing was the only thing I was good at and enjoyed doing. At the age of 15, I decided that I could try to be a journalist. I hoped it would work out because there was no plan B. Now I realise this was my God-given destiny. After getting a degree in journalism, I spent four years as a TV journalist and I’m now on my fifth year as a radio journalist at Premier Christian News. Looking back, I see young, bright-eyed Tola excited for all things news, always wanting to be knowledgeable, consuming current affairs all day, every day. The passion is still there, but now, older and wiser Tola knows that boundaries have to be drawn.

I remember on the first day of my first internship, I had to go to the scene of a fatal plane crash. I’ve reported on murders, sick children, homelessness, kidnappings, sexual and physical abuse, and extreme poverty. Eventually, to protect myself I unconsciously became desensitised to it all. Of course, there were stories that would shock me, but most of the time I wouldn’t let it play on my mind.

For some stories, I just can’t be numb; like the war in Ukraine, the extreme religious persecution in northern Nigeria and the poverty of orphaned children.

Motherhood changed me in so many ways, but one way I wasn’t expecting was how I take in news. For some stories, I just can’t be numb; like the war in Ukraine, the extreme religious persecution in northern Nigeria and the poverty of orphaned children. I think motherhood brought out an emotional side of me that stopped me from going through the reporting process with such nonchalance. I see this as a strength as it’s made me a better interviewer and reporter.

The event that hit me harder than I expected was the tragic death of George Floyd. At first it was just another black man being killed by police in the US. Sad, but predictable. But, eventually, the world would see that this one was different; the way he was killed, the reason he was stopped and the anger of protesters. And it was different for me too. In the days after I remember trying to record an 8am news bulletin which was full of George Floyd news, as well as news of black people in the UK being disproportionately affected by the pandemic. For ten minutes, no words came out, just tears. Tears because I saw no end to such atrocities. Tears because some people were still trying to justify Derek Chauvin’s actions. Tears because some people just weren’t emotionally moved by the situation. I remember that was a taxing day for me, so much so that I took a day off afterwards to sort through my emotions.

The reality of living in a fallen world is that horrible things will keep happening. Nevertheless, as a Christian I can have peace within the chaos.

“I have told you these things, so that in me you may have peace. In this world you will have trouble. But take heart! I have overcome the world.” John 16:33. I hold on to this verse. It has been my anchor. The reality of living in a fallen world is that horrible things will keep happening. Nevertheless, as a Christian I can have peace within the chaos. Prayer and staying rooted in my faith are the main ways I am able to enjoy what I do, while not letting the hard parts grind me down. During both of my one-year maternity leaves, I made a decision to significantly lessen the amount of news I consumed. When I came back to work last month, I felt refreshed with a higher capacity for difficult stories.

I’ve learned it’s so important how you choose to see the world. If you allow yourself to be consumed with the doom and gloom, you’ll never appreciate the beautiful ways in which God is working in the chaos.

Tola MbakweTola Mbakwe is a Christ-lover, wife, mother and multimedia journalist with more than a decade of experience. She spent her formative years in the US and moved to the UK after getting married. When she’s not working with the news team at Premier Christian News, she’s loves playing outside with her two children, and treasures her weekly movie date nights with her other half.