I’m a Christian and an American living in the UK - if the gunning down of 19 children doesn't spark positive change, I'm terrified to think what will

After the tragic fatal shooting of 19 primary school children and two teachers in Texas this week, American Nick Whitaker reflects of America’s reputation for gun violence and what it’ll actually take for the killing to stop.

This week I opened Instagram and the first story I looked at read: “F*** your thoughts and prayers.” I got a familiar feeling of dread as I wondered what had happened this time. What’s this week’s tragedy been? This time, as you well know, was different: Children in a school. 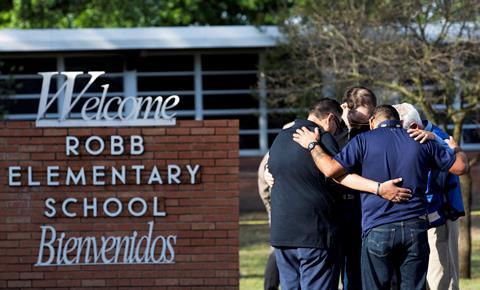 On Tuesday, May 24 a gunman walked into Uvalde’s Robb Elementary School and shot dead 19 students and two teachers, as well as injuring another 17 people. The students were aged between seven and ten years old. The attacker was killed in a shoot out with Texas rangers.

I’m an American living in the UK and it’s been hard to learn of people’s perceptions of us. I didn’t really know we had a reputation for gun violence until I lived somewhere else. I learned that school shootings are one of the things we’re known for. Well, perhaps “guns” are a better all-encompassing American-stereotype.

A few months ago, I ran into it for the first time. I left my friends at home and decided to go out to a comedy open mic night on a weekday; I’d always wanted to try stand-up. I started a joke about what I do if someone starts a fight, and an Englishman interrupted me from the back: “Shoot ‘em?” At the time I laughed along, but I don’t think I’d laugh now.

If the death of more than a dozen school-children by gunfire isn’t the rock bottom that makes us unite for positive change, then I shudder to think what it will take.

I’m starting to see how strange it is that any country would tolerate more than one mass shooting. Many don’t; one attack is all it takes for sweeping reform. Yet, where I’m from, you read the headline, sigh, maybe make a post on Instagram, and wait for the next one. We ignore it to try and numb the deep pain. On the other hand, we’re not built to process this well. We are faced with a non-stop stream of tragedy headlines that would kill whoever tried to absorb all of them.

The least I can say as a Christian is this: If any aspect of our lives becomes more fundamental than protecting the lives of others, we have lost the way of Jesus. I think, embarrassingly, most of my nation has. On one side, there are those who have dropped all notions that life, gender and sex. For them, value and purpose are socially constructed mechanisms by which the powerful try to remain powerful. Therefore these horrific events are an opportunity to twist the knife in their political opponents.

This tragedy is carried by the weight of God’s promise that he is making a place where there are no more tears, no more death, no more pain.

On the other side there are a large swathe of American evangelicals that worship a God who laid down his life while they refuse to lay down their guns. It’s hard to know what to say to anyone anymore. But if the death of more than a dozen school-children by gunfire isn’t the rock bottom that makes us unite for positive change, then I shudder to think what it will take.

There is however, a hope that I hold. I’m not sinking under the weight of these worries and fears; this tragedy is carried by the weight of God’s promise that he is making a place where there are no more tears, no more death, no more pain (Rev. 21:1-4). And another thing about this place is that it will have room for us (John 14:2). It will have room for the victims, and it will have room for their families. While we’re trained by the brutality of this life to say, “so it goes” whenever tragedy strikes, death itself will be a stranger in the place we’re going to. I know then the tears will be wiped away. But I pray until that day. I pray that Jesus will come soon.

Nicholas WhitakerNicholas Whitaker is a Christian minister and writer living in the UK, seeking to redeem the cultures of film, fiction, and fun for the glory of God. Lover of coffee, sunshine, and cooking for friends.