Christians are often portrayed as hypocritical, narrow-minded, and weird in TV and films. That’s why actor Tanya Wylie is careful before taking on characters with a faith. 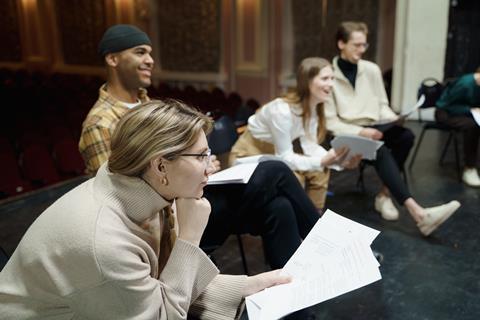 A friend once asked me: “Would you play a Christian character in a production?” I answered immediately, “Yes of course!”. Yet more recently, I’ve been questioning how Christians are portrayed on our screens. Often, they are shown to be eccentric, out of touch and judgemental. So as a Christian actor, would I be doing more harm than good stepping into these “Christian” roles?

Too often when watching TV, I see portrayals of Christianity that have the “ick” factor. Characters such as Dot Cotton from Eastenders and The Simpson’s Ned Flanders are depicted as hypocritical, narrow-minded, and weird individuals. These portrayals can warp society’s view of Christians, making modern evangelism feel like an impossible task.

Dot Cotton was played by June Brown, who sadly passed away earlier this year. She was an iconic and much beloved character that graced our screens for almost 40 years. Dot was depicted as a devout Christian. In the past, she has been heralded as an accurate example of a Christian living out their faith day to day. But I can’t help feeling that she was reduced to gimmick and stereotype. The character’s faith seems based on following the religious rules, spouting scripture and has a somewhat intolerant and backward feel to her.

Characters such as Dot Cotton from Eastenders and The Simpson’s Ned Flanders are depicted as hypocritical, narrow-minded, and weird individuals.

Equally, Ned Flanders falls into a similar category. Ned is a stereotype taken to the extreme, always overly positive, a frequent bible basher and the only notable part of his character is his religion. Although, I enjoyed the way the Geraldine in Vicar of Dibley chats to Jesus throughout the series. The sit-com is peppered with Christian characters who are more eccentric “village life” stereotypes than substance. These examples are a far cry from the reality of Christianity I’ve experienced. Christian faith is about a personal relationship with Jesus rather than simply following rules and quoting scripture.

On the other hand, there are some Christian characters that have genuinely moved me. Andrew Garfeild’s characterisation of Desmond Doss in the 2016 Bio-epic Hacksaw Ridge was a deeply authentic and poignant depiction Christian faith. Equally, Judy Dench’s portrayal of the title character in Philomena was exceptionally moving and showed a truthful account of personal faith and the journey to forgiveness. However, both examples come from true stories. So perhaps the problem is that writers struggle to create fictional Christians and often resort to a dangerous and tired stereotypes.

I don’t want to add to a misrepresentation of Christian life.

As a Christian actor, should I avoid playing a Christian? I certainly don’t want to add to a misrepresentation of Christian life. In production, a huge amount of character development is formed in the script and by the director. Therefore, there is no guarantee that by playing a Christian character I would have autonomy over the portrayal, and this could further legitimise stereotype.

Alternatively, has God called myself and other Christian performers to change this narrative? In taking on a Christian role, I could alter how that character is portrayed; ensuring the character has authenticity and is not undermining Christian faith. Moreover, taking on a Christian role could be a fantastic opportunity for personal evangelism while on set. In fact, that could be precisely why God has provided me with the role.

Instead of saying an immediate yes or no to a Christian role I will first ask some key questions:

1. What is the overall standpoint of the production? Does it criticize Christianity?

2. What is the character like? Is there anything about them that sits uneasy in my spirit?

Ultimately, Praying is the best way to discern if the role is right. God is provider. Usually if I land a role, it is because God has placed me there. Equally in God, we need not be ruled by fear. So why should I fear taking on such a role. It is clear we need authentic Christians on our screens in any capacity and I am determined to walk boldly with prayer and petition into all my roles. So would I take on a Christian role? Yes of course I would.