If I’ve had my Christmas decorations up since mid-November, am I a bad Christian?

YESTERDAY was the official start of advent, which means Christmas trees and fairy lights will be going up all over the place, but what if the festive season started in your house weeks ago? Does going big on the tinsel make you a bad Christian? Lauren Windle refects of whether the fun of Christmas detracts from the true message. 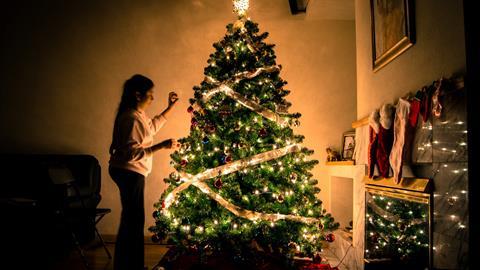 I had my first mince pie at the end of September and I’ve been low-key listening to Wham’s Last Christmas for six weeks now. I’ve already watched Love Actually, the Holiday and Die Hard (yes it is a Christmas movie) and I wore a Christmas jumper once back at the start of November.

When it comes to Christmas, I’m an advertiser’s dream. I love the stockings, advent calendars and even this new “Christmas eve box” trend that’s swept over the Atlantic from the States. I don’t have children but if I did, you better believe there would be matching festive onesies and an annual yuletide newsletter.

Have I gone too far? As a Christian, should I be so heavily invested in the bells and whistles attached with the season when the reason for it is so much greater than the tinsel and wreaths? It’s occurred to me that a stripped-back, humble 25th December, free of fairy lights, could be a better way of reflecting on and truly appreciating the Christmas message. But it seems like a shame to miss out on the fun.

In order to work out if my love of an OTT festive period had crossed the line from life giving celebration into evil consumerism, I checked in with my wise owl vicar, who, for once, gave me the news I wanted to hear. Long story short: Jesus loves a party.

To elaborate on this, he said that he feels most passionatley about “encouraging people to celebrate ’Emmanuel’ full on for 12 days of partayyyyy!” He genuinely put all the y’s and I’m here for it.

He said: ”We tend to greet people with ’Happy New Year’ from Jan 1st because we think Christmas is ‘over’ when in fact we are in the middle of Christmas. Of course it’s a happy new year if you’ve grasped the fact that the God of Heaven and earth has elected to live among us, as one of us!” He included a praise hands emoji at the end of that one.

While I’ve thought a lot about how Christmas starts on 1st November when Asda swaps the halloween gear for Christmas decorations, I haven’t thought at all about the 12 days of Christmas and the importance of the Epiphany. Another friend and ordained pastor Nick (we call him Nick the Vic), weighed in on this and said: “I once tried wishing someone Happy Christmas at a later point in the 12 days. They had no idea what I was on about and looked at me like I had eaten a dodgy sprout.”

So, am I a bad Christian for putting my decorations up earlier than the start of advent? I don’t think so. I think that if I recognise it’s just some fun comforts then why not enjoy them for longer? But I do feel challenged. Not by what I do up to 24th December, but by what I do for the twelve days after. Perhaps it would deepen my relationship with Christ and my understanding of the value of the Christmas story if I planned to mark the coming of Jesus right up until 6th January.