The Sex And The City reboot And Just Like That sees the writers ‘up the ante’ to keep present day viewers on their toes, pushing the already sexually expressive characters to their limits. Writer Lauren Windle asks, if we need to ramp up the old classic, or if it was already shocking enough. 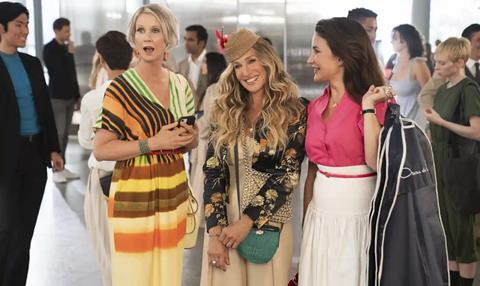 Carrie, Miranda and Charlotte are back in HBO’s SATC reboot And Just Like That

I watched Sex And The City before I was a Christian… the first time. I would be lying if I said I didn’t dip in and out of it when I felt low or wanted to immerse myself in something familiar. To me, the four main characters feel like old friends, even if my vicar would probably advise against the majority of their practices.

I know I’m not the only Christian to enjoy the show, I uploaded a picture of myself watching an episode to Instagram and got a deluge of appreciative messages from friends, plenty of them Christian women.

Just in case you haven’t caught it, or have decided to avoid it, I’ll fill you in. Sex And The City is a 90s comedy/drama based around the eventful love and sex lives of the four main characters, Carrie, Miranda, Charlotte and Samantha. It’s explicit, there’s bad language and nudity and Biblical morality is not adhered to. If you’ve chosen to avoid it for those reasons, I completely understand.

I, however, haven’t avoided it. And before you judge my decision, you should know that – for all its flaws – it was one of the first examples of fearless female friendship I’d ever seen. It was released at a time when I was at school and, due to a combination of factors, had a miserable time with friends. But here were women building each other up, supporting each other through divorce, infertility and cancer, defending each other, protecting each other, laughing together and relentlessly prioritising each other over their transient romantic relationships. At the time I needed to see that modelled – even if this is an unlikely source.

It was one of the first examples of fearless female friendship I’d ever seen.

When I saw the opening scene of the revival series And Just Like That was the three returning characters sitting down for a girls’ lunch, the familiarity of it all made my heart want to burst. It felt like a 20-year reunion.

They are conscious of their aging, maybe too conscious, with comments about grey hair and hearing aids and frequent references to ‘not being in their 30s’. They’ve even replaced their signature cosmopolitans with an age-appropriate glass of Chablis.

As an avid viewer of the show, there are a million different avenues to explore; the way they dealt with the absence of fan favourite Samantha, their clear attempt to rectify the diversity issues and racial insensitivity of the past (the less said about the second film the better) and the unrelatable privilege of the central characters.

But what struck me most was how they’ve ‘upped the ante’. What was shocking and attention-grabbing in the 90s is now par for the course, so in some areas they’ve doubled down.

In the first episode Carrie featured on a podcast and awkwardly rebuffed a question about whether or not she’d masturbated in public. In the following scene the show’s host told her she needed to step up her game in order to be sufficiently interesting. The host lit up a cannabis pipe during in this conversation – which happened indoors in an office building.

Carrie Bradshaw, the 90s sex columnist was surprised by these things, and frankly so am I. I can handle the occasional blow-job joke and the pubic hair mishap. Those things may be ill-advised but they’re not against the law.

What was shocking and attention-grabbing in the 90s is now par for the course, so in some areas they’ve doubled down.

I never thought of myself as a prude. I thought watching Sex And The City in the first place was my ‘Get Out Of Prude Free Pass’. But if we’re expected to keep embracing increasingly scandalous and dangerous behaviour as celebrated personal expression, I don’t want to.

So if that makes me and Carrie Bradshaw prudes, I’m ok with it.