After watching the new Disney+ series about the leaked Pamela Anderson and Tommy Lee sex tape, writer Lauren Windle explains that the spotlight should not be on the famous couple, but on those who sought sexual gratification from their misfortune. 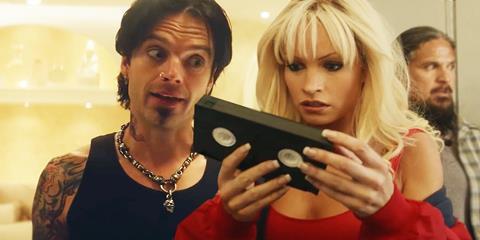 I would never presume to speak on behalf of God, but as I strive to build my understanding of him through both my personal relationship and the scriptures, I feel increasingly disturbed by some of the worldly practices I see around me. As I watched the (very graphic) Disney+ series about Pamela Anderson and the 1995 leaked sex tape, I felt uneasy.

What gave my Spirit unrest was not the married couple who filmed themselves having sex and kept the tape hidden in a hefty locked safe at their home, but the people who sought out the video to watch it. These people were so vast in number that in 2000, Anderson was handed the Guinness World Record for most downloaded person on the internet.

Pamela Anderson and Tommy Lee’s relationship is the focus of the new series starring comedian Seth Rogan and actress Lily James. The producers reached out to Anderson and Lee to invite them to consult on the project, but both declined. The show went on, without the consent of the two people being profiled. Sources close to Anderson have suggested that the programme and associated media attention are “opening up an old wound” for her. I have watched the Disney dramatisation of their relatioship but have not watched the actual sex tape itself.

What gave my Spirit unrest was not the married couple who filmed themselves having sex and kept the tape hidden in a hefty locked safe at their home, but the people who sought out the video to watch it.

I would argue that the “Pamela Anderson sex tape” was the first instance of this type of sexual abuse. Only the person getting revenge wasn’t a spurned lover, it was a disgruntled employee. That employee was reportedly poorly treated by his employer (Lee) but the response was not just or proportionate. It severely harmed Anderson, despite his gripe being with her husband. I won’t spend time on the disproportionate damage suffered between the man and woman featured in the tape. While Lee’s fame and bad boy image sky-rocketed, Anderson was a branded a slut – which is another level of infuriating injustice.

I truly believe that Rand Gauthier, who stole and sold the sex tape was wrong, but I also believe every single person who watched it was wrong too. Every person who, knowing it hadn’t been willingly released by the subjects, sought it out to be tantalised by the stars’ shame and violated their privacy. Those people should be deeply ashamed and convicted to do better.

Every person who, knowing the video hadn’t been willingly released by the subjects, sought it out to be tantalised by the stars’ shame and violated their privacy should be deeply convicted to do better.

So next time someone hacks a young starlet’s iCloud and attempts to sell their dignity on grubby websites or an enraged ex flogs a compromising video of a famous singer, ask yourself: “Who’s wrong?” Is it the girl who took a nude to send to her boyfriend or the married couple who enjoy recording their intimate moments? Or is it the person who hunts on Google for non-consensual pornography for their sexually gratification?