Jezebel – how evil was she really? 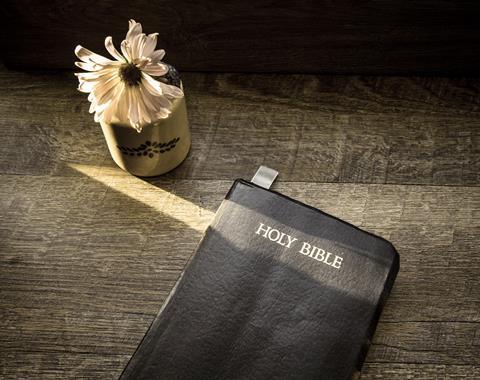 The name ‘Jezebel’ has had negative connotations for centuries. Even people who have never read the Bible, have no idea who she was or where she came from, still know that Jezebel was bad.

We are going to delve into Jezebel’s story to see if she was really as evil as her reputation. Her name crops up in several passages in the two books of Kings. For someone who lived so long ago in history – way back in the ninth century BC – we know quite a lot about her.

Jezebel was born into the Phoenician royal family. Phoenicia (now Lebanon) was a group of independent city states including Tyre and Sidon; by the time of Jezebel’s birth it was at its peak as an advanced civilisation. It had been the dominant commercial power in the ancient world, influencing key cultures like Greece and Egypt. Jezebel’s father, King Ethbaal, ruled in Tyre, where, along with the rest of Phoenicia, the people worshipped Canaanite idols. Astarte and Baal were key ones and Jewish historian, Josephus, described King Ethbaal as an Astarte priest too.

To the south of Phoenicia lay Israel, a nation with a very different culture. The inhabitants lived by farming, cultivating vineyards, orchards and herding. The people were monotheistic, shunning idols and worshipping the only God Yahweh, yet often tribal disputes spoiled the peace between them. Following the death of King Solomon the nation was torn into two (probably around 922 BC). Israel occupied the north, which included the city of Samaria, while Judah to the south included Jerusalem.

Frequent tribal eruptions, bad rulers and attacks from other nations made Israel particularly vulnerable. So when Ahab became king of Israel, he decided to make an alliance with Ethbaal, presumably to protect his border. The alliance was sealed in the usual way: Ahab married Ethbaal’s daughter, Jezebel. We don’t know how Jezebel felt about leaving her life of luxury in Tyre, but Ahab took her to Samaria to become queen of Israel.

The people probably expected Jezebel to forsake idolatry and join them in worshipping Yahweh. Except, of course, she didn’t. In fact, neither did her husband. The writer of 1 Kings records that Ahab “sold himself to do evil in the eyes of the Lord, urged on by Jezebel his wife” (21:25). He became one of the worst kings of Israel in history, and during the 22 years of his rule unleashed idolatry, inflicting great harm on the nation. With Jezebel’s encouragement, it took him no time at all to set up shrines to Baal, even importing sacred worship poles to honour Asherah, the fertility goddess. All the forms of cultic worship that had been anathema to the people of Israel were now embraced in the very palace of the king. 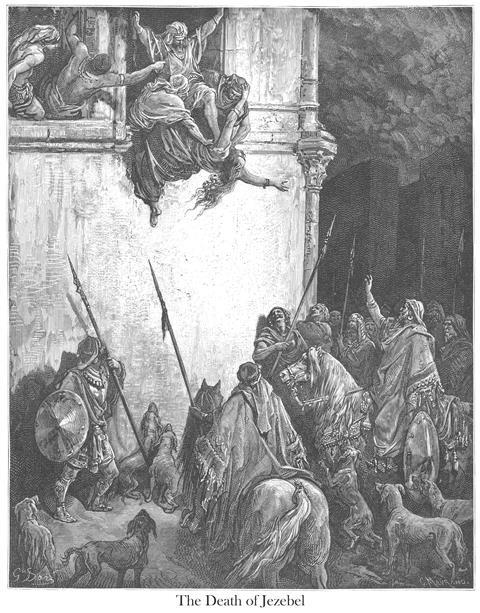 The Death of Jezebel 2 Kings 9:33 From the book ‘Bible Gallery’ Illustrated by Gustave Dore with Memoir of Dore and Descriptive Letter-press by Talbot W. Chambers D.D. Published by Cassell & Company Limited in London and simultaneously by Mame in Tours, France in 1866. Credit: © Alamy

As well as having substantial influence on her husband, Jezebel had an agenda of her own. Disdaining the monotheistic religion of the Israelites, she had no intention of living under the law that had been given to Moses centuries before. Whether it was through a sense of ethnic superiority or simple hatred of her new neighbours, she decided to import some 450 prophets of Baal from Phoenicia into Israel, to ensure Baal worship would replace the worship of God. Even worse, she set about eliminating God’s prophets, sending out assassins to find and kill them. Horrendous persecution and slaughter followed without mercy. The death toll would have been even greater if Obadiah, Ahab’s God-fearing servant, hadn’t taken the risk of defying Jezebel. With loving care he managed to hide 50 prophets of Yahweh in caves.

Consumed by a lust for power and revenge

Jezebel greatest mistake, of course, was to discount the possibility that Israel’s God might be real. But God’s response to the outrage was to inflict a famine on the land, and send his prophet Elijah to confront Ahab and Jezebel about their wrongdoing. Ahab was willing to listen. In 1 Kings 18, we read of the extraordinary story of Elijah’s challenge to the 450 prophets of Baal on Mount Carmel, to see which god really existed. Having built an altar on which two dead bulls were laid, Elijah taunted them to call on their gods to send fire to burn up their sacrifice. They called in vain from morning till night, yet when Elijah drenched the altar in water and prayed to God, the fire fell. Not surprisingly, the people fell on their knees in fear before Yahweh, and the Baalites were taken away to be killed.

If Jezebel and her husband had responded with repentance and turned from idolatry, their story would have been very different. But instead Jezebel became bent on revenge, threatening Elijah with immediate death. He fled into the desert under God’s protection and Jezebel never succeeded in killing Elijah. But what she did to a perfectly innocent man ensured that her name would forever be linked with evil.

This story is told in 1 Kings 21. Close to Ahab’s palace was a vineyard belonging to Naboth, a faithful Jewish believer. Naboth loved his vineyard not just because it yielded fine grapes, but because it had been in his family for generations and it was his link with his parents and grandparents. However, Ahab wanted the land for himself; when Naboth refused to sell it, Ahab got sullen and angry.

Jezebel’s character is shown very clearly by the way she took over. Scornful that her husband couldn’t get what he wanted, she concocted her own plan. Without any regard for truth, for justice or for Naboth, she arranged to have Naboth arrested and killed. Forging letters from her husband, she commissioned two scoundrels to make false accusations against the vineyard owner at a dinner he was invited to. The allegations were not only lies, they were particularly cruel ones. The claim was that the faithful Naboth had cursed God and the king. There was to be no trial, no defence, just mob rule where he was taken out and stoned to death. Appalling atrocity took place just so Jezebel could get Ahab an extra piece of garden around his palace.

Once again, Elijah confronted Ahab with his sin, and prophesied that Jezebel would be eaten by dogs. Though Jezebel showed no sign of penitence, when Ahab was overcome by remorse and repented, God allowed his reign to continue until he died in battle. Jezebel’s own death was recorded in 2 Kings 9. As the new king, Jehu, went to confront her, she dressed herself defiantly in splendour. But at Jehu’s command, her servants threw her out of the tower to meet a bloody and grisly end. By the time Jehu’s men went to collect her body for burial, little of her corpse remained. Her flesh had indeed been eaten by dogs.

What can we learn from Jezebel?

Jezebel’s key fault was that her idolatry was all-consuming. Her determination to worship what she wanted, putting her own idols in the place of God, led her into oppressive, unjust and murderous cruelty. It meant too that her ears and heart became closed to any conviction of sin.

We don’t have obvious statues of idol worship in our Western society today. But idols still exist and can deeply affect our lives. What Jezebel’s story teaches us most of all is the destructive power of idolatry. Whenever we put something other than God at the centre of our lives, then we are in danger of being pulled away from who we are and what God created us for.

If we begin to bow down to modern idols of freedom, power, money, status or self, we can be dragged into selfishness and greed, and become indifferent to the needs of others. Even things that are good in themselves, like work, relationships, home and leisure can become problematic if they become a substitute for worshipping God; they can easily crowd out prayer and spiritual discernment. Jezebel’s story shows us that loving God with all of our heart, mind and strength is not only the right thing to do, it also helps us to understand God’s best for ourselves and frees us to love, respect and enjoy other people.