Samaa died in a bombing attack on her church. She told writer Jemimah Wright about meeting Jesus before she came back to life and what she learned about joy.

In 2009 I was in Kona, Hawaii writing the biography of a woman called Gunila Baumann. While I was there I met a girl from a Middle Eastern country. She was in her twenties, with long brown hair and an infectious laugh. There seemed nothing unusual about her, apart from perhaps an above average level of joy, so I was amazed when I heard that she had died, gone to heaven, met Jesus face to face, and then come back to life. 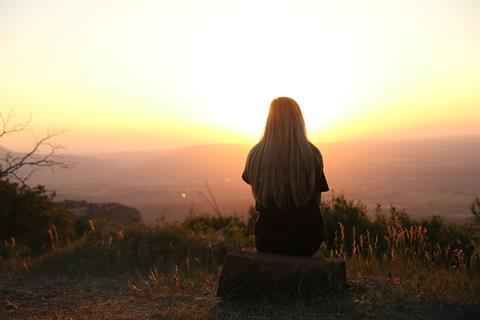 Samaa (her name and homeland have been changed for her protection) converted from Islam to Christianity as a teenager, surviving the wrath of her father and brothers, and started attending church. One Sunday, Samaa and two of her sisters were in the church service.

During one of the hymns, when the 1000 strong congregation was standing and singing, there was a massive explosion, a loud noise with lots of smoke and debris filled the room. People near the blast were killed or horrifically maimed.

Terrorists had planted bombs in the building. Someone shouted “it could be a bomb” and panic set it. The sanctuary of the church was on the third floor of a three-story building, with only one stairwell exit.

With the crowd, Samaa eventually pushed through the smoke and rubble to the stairs. She got to the 2nd floor where some women were hiding behind one of the fire doors. Their clothes had been burnt off from the explosion. In their culture it was shameful to be uncovered, so that could not leave the building.

As her body flew across the room from the explosion she cried out: “Jesus help me, Jesus save me.”

When they saw Samaa, they begged her to get them something to cover up. She agreed. When she eventually got out of the building, she went to find some blankets. People were still streaming down the stairwell, so she couldn’t get up to the women on the second floor.

As she waited, carrying the heavy blankets, she leant against a fire extinguisher box. Unknown to her, the second bomb had been planted inside, timed to go off about ten minutes after the first. When the 2nd blast went off, the full force of the bomb hit Samaa. She died along with nine people around.

As her body flew across the room from the explosion she cried out: “Jesus help me, Jesus save me.” When she opened her eyes she was in heaven and Jesus was standing in front of her, arms wide open. He said: “Welcome home Samaa.”

She said she felt his love like the warmth of the sun sinking into her body. And such deep joy. She cried when she speaks of him, his holiness and power, and how love seemed to emanate from him. In his presence, her life flashed before her. She knew she had lived selfishly, she wanted to make up for it, and give her whole life to serving him on earth. Jesus told her she had a choice to stay or go back.

She felt Jesus’ love like the warmth of the sun sinking into her body. And such deep joy.

When Samaa came back to life, she had third degree burns all over her body, and had lost her eyesight. Her hair was gone and there was a hole in head that exposed her brain. She knew she would live, but she cried out to God for her eyesight. After three days, God gave her eyesight back; the doctors could not explain it.

Over the next year God completely healed Samaa. He gave her new skin. She has long hair again, which she wears on the side, because there is a large patch where hair does not grow – where the hole in her head had been. She used to ask God to let her hair grow over the scar, but one day God reminded her that Jesus still his scars from the crucifixion, and this was a reminder of what God has done.

I ended up writing the first draft of Samaa’s biography, which was then taken on my another writer. The book is called Face to Face with Jesus. I spent many hours with Samaa, interviewing her for the book. A few things struck me about her life; she was always full of joy. She did not have an easy life, and was separated from her family and homeland. “Jemimah, joy is the currency of heaven,” she would tell me with a laugh.

Samaa came back to tell the world Jesus is coming soon. Her story is a reminder to throw off everything that hinders, and run the race set out for us, because one day we will all be face to face with Jesus.

You can read more about Samaa’s story in her book Face to Face with Jesus available here and Gunila Baumann’s Releasing your children to the Lord here.