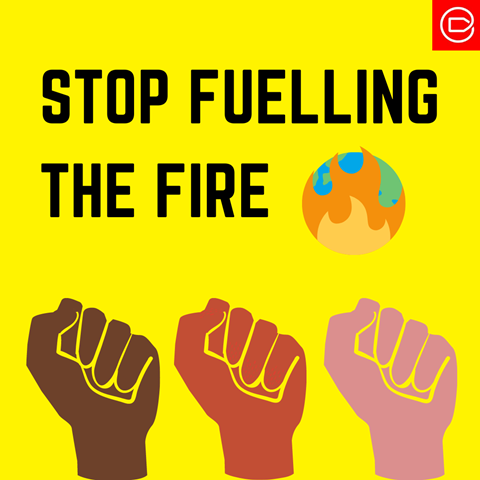 Climate change is causing an increase in extremes; flooding, drought and heatwaves. It is at its core unjust, affecting those who are most vulnerable. As Christians we have a duty to be environmental stewards of God’s creation, as it says in Genesis 1:28 “God blessed them and said to them, “Be fruitful and increase in number; fill the earth and subdue it. Rule over the fish in the sea and the birds in the sky and over every living creature that moves on the ground.””. One way we can be stewards is by campaigning in what ways we can, for climate action and call for climate justice.

Today, 18 August 2020, a group of young people aged 18-30 are doing just that as they launch Stop Fuelling the Fire, a campaign focused on encouraging the Government to end of the use of UK Export Finance in funding fossil fuel extraction overseas. Fossil fuels are oil, natural gas and coal and by burning these to make energy we produce carbon dioxide, which contributes hugely to climate change. Burning fossil fuels doesn’t just produce greenhouse gases, it also generates a lot of heat, which leaks out to the atmosphere and this influences rising global temperatures.

UK Government funding for fossil fuel projects has increased in recent years - something the young activists believe to be   a   hypocritical   move   for   a   government   that   prides   itself   on   being   a   champion   of sustainability. The campaigners plan to engage and raise awareness amongst the wider public and   various   political   stakeholders.   They   will   be   doing   this   through   various   methods   including launching a petition and contacting Boris Johnson and MPs.

We can all be activists, by signing petitions, sending letters to MPs, or even giving talks in your local church. This is activism.

Activist Hannah Abban, a member of the campaign’s Press and Parliamentary team, says,

“Our motivation behind the campaign is the firm belief that our faith calls us to action. Truly loving one another as commanded by Christ means tackling the complicated effects of climate change and the   inequalities   it   is   creating   head   on.   Several   countries   are   contributing   to   global warming; however, we want to make sure the UK is setting an example by doing all within its power to decrease its carbon footprint.”

To find out more and support this campaign, sign the petition here.

Chloe Brimicombe is part of the Christian Aid’s Prophetic Activist scheme, which launched at the start of 2020 and aims to allow young people to create a campaign to tackle societal injustice. This year’s   theme   is   climate   justice;   a   phrase   which   describes   the   desire   to   readdress   the inequalities caused by global warming.

The launch of the campaign marks a growth in activism amongst young people regarding climate change and its negative impact on human communities and various animal species. Most noticeable, was the climate school strikes which took place last year with over 300,000 people and 1,000 companies in the UK participating.