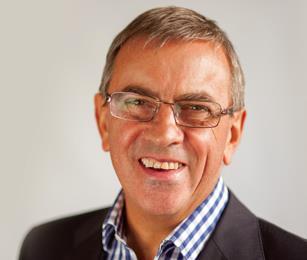 Not always, says Rob Parsons – for some couples, Christmas can be the most stressful time of the year …

Psychologists often use a well-known scale to assess how much stress a person is under. It lists life events and allocates points to them. If you accumulate too many points in too short a time, you run the risk of suffering some of the negative effects of stress. Losing a spouse is 100 stress points, divorce is 75, and there are many others. And right there in the list of stressful life events is … Christmas!

I remember one Christmas Eve very well. My wife Dianne and I had spent most of the day trudging around shops trying to find items that we still needed for the big day and things had not gone terribly well. A mixture of weariness and vexation resulted in some rather acerbic comments between us. And it hadn’t helped that we kept meeting people who had apparently all conspired earlier to ask us the same question: “Final bits and pieces, is it?” I practically had to drag Dianne off a dear old lady from church who had only got as far as “Final bits ...”

Twelve hours later, in the early hours of Christmas morning, we found ourselves arguing about who’d done most towards Christmas and whose fault it was that 50 cards (all written with the loveliest greetings) were still on the stairs waiting for a house number, a surname or, in some cases, the whole address to be written on the envelope.

We sat on the bedroom floor surrounded by a dwindling supply of adult-appropriate wrapping paper – but, for some reason, yards of Thomas-the-Tank-Engine-in-the-snow paper – and an evil roll of Sellotape that deliberately hid its edge. The seeds of frustration sown during the last month were fast beginning to germinate.

Dianne threw a pair of half-wrapped Superman boxer shorts at my head (thankfully she didn’t pick up The Guinness Book of Records lying next to them!) In retaliation I unleashed a series of accusations about leaving things to the last minute that were actually far more applicable to me than to her! It was a scene that is played out in different guises every year in many households.

For many couples, the Christmas holidays can be one of the most stressful times in their marriage. One survey of 3,000 people reported that over half of couples argued more during December than at any other time of the year. It also revealed that the average couple had four rows a day – adding up to 124 over the month. The main sources of conflict or stress were money worries, visiting the in-laws, housework, and cooking and preparing for guests. So how can we survive these pressures? Here are a few ideas that have worked for us:

1 Promise not to stock up enough food for the relief of Mafeking. Remind yourself that the shops are going to open again before August.

2 Realise that although your five-year-old wants a Frozen Move N’ Groove scooter, life will actually go on if she doesn’t get it. And don’t drive 100 miles on Christmas Eve because you hear a shop has got just one left.

3 Understand that Uncle Tom is not going to have a radical personality change because he’s got a funny hat on. If you do not demand harmony, you may just get it.

4 Remember that what children really love – probably more than expensive presents! – is to play silly games with all the adults joining in.

5 If you can, share part of your Christmas with someone for whom the pleasures that you take for granted will be a wonder. You’ll see again some of the beauty of Christmas through their eyes.

6 Resolve to finish the present wrapping on December 10th. That way you’ll only have three hours’ wrapping left to do in the early hours of Christmas morning!

7 Avoid utter despair by buying a few spare batteries for those ‘batteries not included’ presents.

8 Put wrapping paper in a black bag as soon as the gift is opened. This avoids Uncle Tom putting his new socks in the bin by accident.

And finally, a little idea that has worked for Dianne and me …

10 In the 14 days before Christmas try to take five minutes a day to meditate on a line from the Christmas story, for example Day 1 – “The angel said to Joseph, ‘Don’t be afraid’”; Day 2 – “You will call him Immanuel, ‘God with us’.”
Have a blessed Christmas!

+ Rob Parsons is chairman of Care for the Family. His latest book (with Katharine Hill) The Really Really Busy Person’s Book on Marriage (ISBN 978 1 910012 307) is published by Muddy Pearl and available from www.careforthefamily.org.uk £7.50