What about the boys? 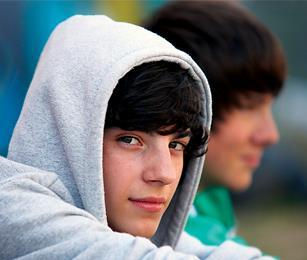 Helen Jaeger discusses how boys are being left behind in a world that has been concentrating on the girls ...

Whilst there’s still some way to go before women enjoy equality with men, some commentators fear changes in society that encourage young women and girls are having a detrimental effect on young men and boys. Helen Jaeger outlines the challenges facing parents of boys today and explains why home, school, work and church are important.

It was an ordinary day, just like any other. Amanda said goodbye to her colleagues and headed home to her family. On the drive home, she thought about her son, Kieron. She’d been worried about him for a while. He was a shy child who lacked the social confidence of his sister. It was a struggle even to get him to come to church. Now aged 21, he’d been unsuccessfully looking for work for the past year – what he secretly wanted to be was a writer. Little did Amanda know that her ordinary day was about to turn into a nightmare.

Three hours later, after a search that involved the police and local area, Kieron was found dead. He’d taken his own life just a few miles from his home. The note he left for his family detailed exactly what kind of funeral he wanted. Kieron had done what his suicide note said he’d do.

Worryingly, Kieron’s story is not unique. One in 20 suicides will be by 16 to 25-year-olds and suicide is the leading cause of death among males under 35. But why is this and does it matter?

Experts argue that boys and young men are under increasing pressure in a society that seems more to encourage girls and women. With a loss of traditional ‘masculine’ jobs and routes into work, along with the breakdown of family life and changes in the education system that seem to favour more ‘feminine’ ways of learning, many are beginning to think that boys are being unfairly disadvantaged.

So, if you’re the mother of sons, how can you help them?

The first step is to increase your son’s emotional resilience. Some believe there’s increasing pressure on boys to be seen as ‘tough’ and unemotional, so sharing emotions or weaknesses is seen as being a bad thing. Vulnerability can be viewed as a weakness and sensitivity can be hidden away – with negative consequences.

Yet without an opportunity to talk about problems or difficulties, chances are your son will struggle unnecessarily. Developing emotional intelligence is a skill that will benefit him not just now, but later in life, too.

Ethan, a sixth former at a Christian school, who hopes to volunteer with a mental health charity in his holidays, agrees.

“We’re encouraged to shrug things off or bottle up our emotions, but I think it’s not good to bottle things up,” he says. “We all need a place to be able to vent or rant, or even to have a cry, if we need to. Girls may be under pressure to look good all the time or be fashionable, but boys are under pressure not to have, or to show, any emotions. I don’t think that’s a good thing.”

Ethan is fortunate – his school takes well-being seriously, with a whole sixth form team dedicated to it and strong links to other agencies and services. The school talks easily about emotional well-being and encourages emotional intelligence, particularly in its sixth form students.

But if your son’s school isn’t so forward thinking, perhaps you could make it a priority to bring the subject up with the school’s pastoral team, head or governors?

And it’s not just at school that emotional intelligence needs to be practised. If you’re bringing up boys, what about their emotional expression at home, too?

“I think it’s a myth that boys don’t have emotions or don’t want to share them,” says Sarah, a Christian, single mum of a 14-year-old boy. “In my experience, my son has even more intense emotions than some of my friends’ children, who are girls. As a parent, I want him to be happy, so I used to try to make him see the positive in every situation, but I found that wasn’t very effective.

“Then I heard about a system called ‘emotional coaching’ – it’s where you accept your child’s negative emotions, identify with them and let them express them, before helping gently guide them to a solution. It takes time, but I find it incredibly helpful. My son seems much more balanced and happy, since I started supporting him in this way.”

Realising your son is emotional is part of being a good parent, especially if your son has a sensitive streak, which he perhaps feels cautious about expressing outside home. Remember: Jesus was an emotional man, who appreciated beauty, felt compassion, suffered and cried.

Of course, it’s in our churches that boys and young men should be welcomed and nurtured, too. David who, with his wife Jackie, has four boys says their church is hugely supportive and offers lots of activities, where his sons can be with other men of faith, who are young and old.

“We’re a large church, so there’s always a lot going on,” explains David. “We have worship teams, welcoming teams, sound engineers – a whole range of volunteering opportunities. Plus we run ‘Dads and Lads’ activities, like canoe trips, barbecues and sports events.

“We also encourage good friendships, with things like men’s breakfasts. We want our sons to see what good, non-sexual male relationships look like, as well as modelling for them how to relate to girls, women and the wider world. There are also one or two boys in church, friends of my sons, who come to me to chat, as they don’t have a dad at home. I personally believe boys need to have strong male role models around them.”

Many would say David is right – having a positive male role model is essential for boys. Sadly, however, it’s something that may be lacking for many in our modern society.

Part of the problem is the way society has broken down over the last 50 years or so, both through a change in employment opportunities and stress on families. Take work. Increasingly, Britain has moved from manufacturing industries, such as car or machine production – or even mining – to service industries, such as call centres and hospitality. Where whole communities of men and their sons might have gone to work in the same factory or mine, that lifestyle has simply disappeared. And it’s not just in blue collar jobs.

Traditionally, family life might have encouraged sons to follow their father’s footsteps into higher education and beyond. Now fathers may no longer be so actively present in their son’s lives, perhaps through relationship stress or scarcity, and that well-worn route into employment is also under threat.

With the disappearance of such jobs, communities and examples, men are finding it difficult to shape their identity.
What’s more, although employment can be a source of stress and frustration, it can also be where men (and women) find satisfaction, a place to express and develop their God-given talents, develop social bonds and friendships, and experience the dignity of contributing to their own, their family’s and society’s welfare.

Without the responsibility of work, young men in particular seem to become directionless, aimless and unhealthy. In worst case scenarios, they can develop serious illnesses such as depression, anxiety or heavy drinking.

So, how does this relate to bringing up boys? In general, boys do well in taking on responsibility. Helping your son to develop a pro-active, problem-solving and self-motivated approach to life is a great skill to teach him. Do this in simple ways, like encouraging your son to participate in out of school clubs and activities, such as swim club or beavers or, if he’s older, by taking part in volunteering activities at school or in the community. This way he will develop his own sense of self, his social skills and his independence, as well as learning to value activity over inertia.

Activity for boys is something that Liz, who’s been a primary school teacher in a Christian school for over 20 years, is passionate about.

“I personally don’t like the trend towards computer games that we now see, particularly among boys,” says Liz. “I think it encourages children towards autistic traits and doesn’t help to develop their social or physical skills. In my class, of course we have ICT, but I also try to include methods that favour the way boys learn, which often involves exploration and naturally moving around.”

Some teachers believe that exploration and ‘moving around’ are classroom traits increasingly under pressure since the introduction of the National Curriculum in the early 1990s. This has focused more on formal learning styles, including long periods of sitting, writing and reading – styles of learning that educationalists argue favour girls.

The legal requirements of literacy and numeracy have also meant that subjects such as PE had to be “squeezed in around the edges”, as one teacher I spoke to put it.

So, what can be done to help boys, who, developmentalists argue, also start to learn later than girls? Aside from radical solutions such as allowing boys to start school later (Raising Boys by Steve Biddulph), one solution can be to recognise that your son has an innate desire to move about as he learns. If you do any form of home learning, don’t expect your boys to sit quietly all the time. In discussions with your son’s school, focus on how he is achieving and what he is learning, not just on his behaviour or ‘sitting still’ in class. And praise your son.

In short, if you can encourage your boys to be emotionally integrated, social, responsible and active across all areas of their lives, including home, school, church or work you’ll be doing a good job bringing them up to be men. It’s a job well worth doing and worth doing well.

Man up your church

Consider setting up a ‘Dads and Sons’ group, organising activities for just the male members of your church or start a ‘Boys and Men’ group for the local community.

Set up a men’s reading group – look specifically at male expressions of spirituality. Do a Bible study on the life of David or read a book by a leading Christian writer, like Richard Rohr’s From Wild Man to Wise Man.

Have a series of talks that looks at men and faith.

Consider setting up a confidential space where boys and young men can talk about their problems. (Apply rigorous safeguarding to volunteers.)

Ensure your leadership team has a mix of men and women, offering views on how church can benefit both genders.

Encourage young men in your church to socialise together.

Open up opportunities for boys and young men to be responsible for ministry in your church, from making teas and coffees to leading worship or setting up an event.

Consider offering volunteering opportunities for unemployed men to help with daily structure, esteem and activity, while they search for work.